In the Midst of Conflict, India’s Indigenous Female Forest Dwellers Own their Land

On the International Day of the World's Indigenous Peoples, IPS correspondent Stella Paul speaks to indigenous women in Korchi village in western India, about what it means to own their own land. 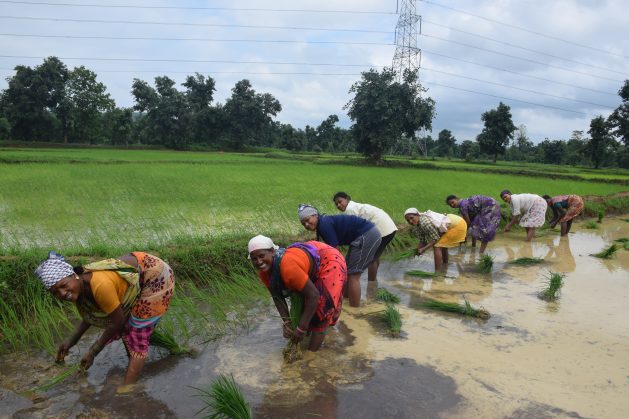 Jam Bai (in red sari), a member of the Indigenous 'Kawar' community, sows rice saplings in her paddy field as her relatives and neighbours help her. After years of struggle she now officially owns the land she farms on. Credit: Stella Paul/IPS

KORCHI/GADCHIROLI, India, Aug 9 2019 (IPS) - Jam Bai, an Indigenous farmer from Korchi village in western India, is a woman in hurry. After two months of waiting, the rains have finally come and the rice saplings for her paddy fields must be sown this week while the land is still soft.

But on Saturday Aug. 3, a day before IPS visited the village, government security forces shot dead seven armed rebels belonging to a far left, radical communist group called the ‘Maoists’ or ‘Naxals’ in a village 40 km from here.

Located roughly 750 km east of Mumbai in Maharashtra state’s Gadchiroli district, which has one of the India’s thickest teakwood forests, the area is often in the news for the violent incidents such as landmine blasts, killing, gunfire, arrests and protests that occur here. Maoists have been waging war against the government for over a decade here as they demand a classless society.

Since the incident, there has been an unofficial shutdown around Korchi. As tension and fear spreads, Bai could not find a single labourer to hire. But the 53-year-old will not give up: not sowing the fields this season is not an option.

Her reasons are not only financial but also emotional.

After years of struggle she now officially owns the land.

So today Bai has called on several of her women relatives and friends from the village. With saris pulled up over their knees and heels dug into the muddy water, they bend in a row, holding a bundle of saplings in one hand, while sowing a small bunch with the other.

“I have five acres of land. So far we have finished sowing about one acre. There are four more to go, but we will surely finish the rest in two to three days,” says Bai. The women laugh and cheer for her.

The paddy fields that Bai owns are located at the edge of a her village, beyond which lies a forest. For generations, Bai’s family has sustained itself both by farming on the land and collecting fruit, tree bark, vegetables and herbs that grow in the forest, just like other members of their Indigenous communities.

But they never possessed official rights over either of the land areas.

It was only after the government started to implement the Forest Rights Acts 2006—a new law which recognised the rights of the Indigenous peoples living in the forest—that Bai applied for formal ownership to the land her family held. Finally, after nearly a decade’s struggle, she received her land rights last year.

“Before me, my mother in law and her mother in law also sowed rice in this land. But 15-20 years ago, everyone started to say, ‘this land belongs to government, you are only occupying it’. That is when we realised that we need formal rights and ownership. After the new forest law came, along with others, I also applied in 2008 for my rights. Finally, last year I received my Patta (ownership certificate),” she says. 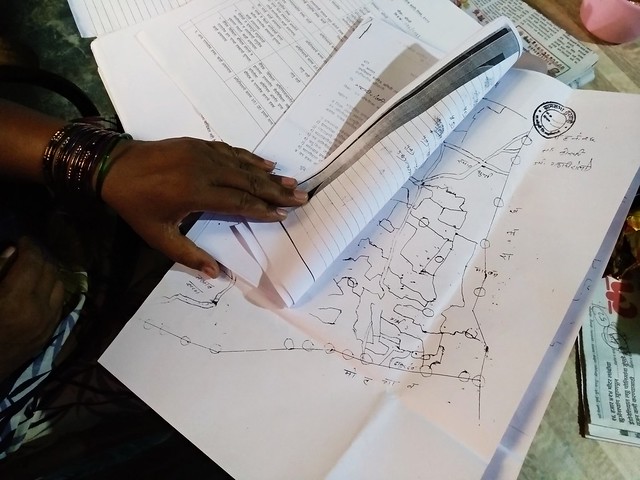 A woman shows an application for individual landrights and the documents that are required. This includes maps and receipts of the land tax paid to the district government by the family for past three generations, multiple signatures of the applicant, their family members, the village chief, and senior government officials at the Land and Revenue department etc., several rounds of verification by village and district level officials. Credit: Stella Paul/IPS

Kumaribai Jamkatan, 51, is one of those leaders who have been fighting for women’s land rights since 1987.

Under this law, the entire community shares the forest resources of barks, seeds, fruit and vegetables, which include; gooseberries, blackberries, mushrooms, bamboo shoots, soap nuts, and various herbs and shrubs. All of these have been part of the Indigenous communities’ diets and source of their livelihood for generations.

The struggle has been long and hard with social, financial and legal challenges, Jamkatan says.

“In the beginning, nobody even believed in the individual land rights of women. Some saw it as a huge work burden as the land is usually in the name of the patriarch of the family and granting ownership to women would mean distributing the land to individual family members.

“Then there are legal challenges: the application needs several documents, including maps and receipts of the land tax paid to the district government by the family for past three generations, multiple signatures of the applicant, family members, the village chief, and senior government officials at the Land and Revenue department etc., several rounds of verification by the village and the district level officials and goes through several government agencies all of which take a long time,” says Jamkatan.

In 2017, locals, supported by a local NGO, Amhi Amchya Arogyasathi (We for our own health in Marathi), formed the Maha Gram Sabha (the Great Village Assembly). The assembly is a community-based organisation with members from 90 Indigenous villages of the district’s 125 villages. Gadchiroli district is at least nine times the size of London, with a total population of about 1.7 million.

The Great Village Assembly has not only spearheaded the land rights movement of women in a collective manner, but also asserted their rights to the forests and its resources. About 3,000 women are reported to have received land rights since the assembly was formed.

The assembly believes that Indigenous people have the first right to land and forest. When this is ensured, the community has a better life and the forest also flourishes, Nand Kishore Wairagade, a former village chief and now an advisor to the assembly, tells IPS.

Wairagade says the formation of the Great Village Assembly helped revolutionise people’s rights over the land: “There are 90 villages in this assembly who meet regularly and decide on everything from applying for land rights to collecting forest resources like Tendu leaves (a significant source of income for the forest peoples which is used to make hand-rolled cigarettes), gooseberry, mushroom etc. The assembly also oversees the sale of Tendu leaves, negotiates its price with the buyers and ensures that the money is paid directly to bank accounts of the women sellers.”

These have all been hard-won gains.

“We have taken to the road many times. Since 2012, when the government first decided to grant us the collective rights, we have held protest rallies, sit-in demonstrations, road blockades and strikes. Finally, last year they started to distribute the certificates again. Now, people in 77 villages (out of the 90 villages that are part of the assembly) have land ownership but people in 13 villages are yet to receive theirs,” says Jamkatan who is pursuing a personal goal of helping 1,000 women get land rights this year.

Global experts have emphasised how land use by Indigenous peoples plays a role in conserving the environment and mitigating climate change. A special report on Land and Climate Change released by the Intergovernmental Panel on Climate Change (IPCC) on Thursday, Aug. 8, highlights how indigenous and traditional ways of managing land can help reverse land degradation and mitigate climate change in the process.

Commenting on the report, Andrea Takua Fernandes, frontline organiser for Indigenous communities at 350.org, tells IPS the leadership of the Indigenous people is key to addressing both the climate crisis and deforestation. “The biodiversity defended by Indigenous people will be essential to cracking the code of how to respond sustainably and fairly to the climate breakdown.”

In Korchi village, Wairagade shares an example of how Indigenous people use land in a sustainable manner: “the community here knows exactly how much to take from the forest. Their need is not driven by market and profits, but meeting the need of the family. When they harvest bamboo shoots, they take only a few to feed themselves and leave enough in the wild, so that the forest can be regenerated. So, sustainability is in our culture.”

No land rights, no empowerment of women
Sarajaulabai Ganesh Sonar, a smallholder farmer in Korchi who owns three acres of land which she was officially awarded the title deed to last year, believes that without land ownership, women’s empowerment is incomplete.

She tells IPS that previously women were too scared to demand their share of land.

“Now they see it as a fight for their own identity. [A woman] can also earn a living from her own land. In the forest also, before we had collective rights, we used to be scared of the forest guards and think ‘what if he caught us and beat us etc’. Now we don’t have to sneak in and hide. So, for us, land is our real source of empowerment.”