“A crisis of politics or a “crisis of numbers”? 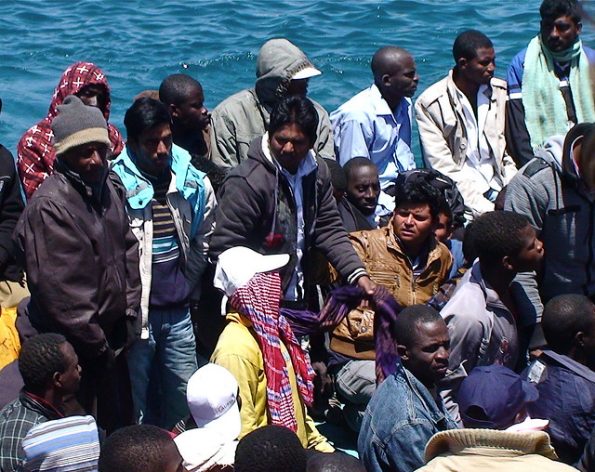 Scores of migrants and refugees have been desperately trying to cross the Mediterranean Sea. Credit: Ilaria Vechi / IPS

GENEVA, Aug 1 2019 (IPS) - The migrant and refugee crisis has become a serious test for the unity of Europe as a political project. The inflow of destitute migrants and refugees has tested Europe’s political unity to an unprecedented extent. With a long-term solution to the migrant and refugee crisis nowhere in sight, the adverse impact of the current situation has the potential to unfold further and to give rise to a broader crisis with long-term implications, affecting Europe and the MENA region alike.

In his influential essay “The End of History?”, Professor Francis Fukuyama predicted that the universalization of the Western concept of liberal democracy, in the aftermath of the end of the Cold War, would prevail and erase differences between peoples, societies, civilizations and world regions. Nevertheless, the manipulation of despair and the violent destruction of lives and assets in the Middle East have taken their toll in terms of the radicalization of youth. The re-emergence of populism in advanced countries continue to divide their societies. The situation is particularly striking in countries of Central and Eastern Europe that witnessed a surge in nationalist sentiments once the communist era came to an end and that did not have a colonial past. In Western Europe, the adverse impact of globalization and the financial crisis have given rise to the notion of a lost generation in which Europe’s youth experience greater degrees of impoverishment, inequality and unemployment. A political vacuum has therefore emerged, which has given rise to movements that anchor their ideologies on anti-globalization, unilateralism, protectionism and extreme forms of nationalism. Progress is being achieved to come to terms with its deadly sting, but populism in the West and extremism in the Middle East – spilling over into Europe – cannot be set against one another. The former is still – but for how long – predominantly peaceful in nature while the latter is generating political violence.

Populist parties are emerging as credible actors in light of the recent electoral successes in local and national elections. Their recipe for success: spread of fear, anger, hatred and xenophobia towards refugees and migrants in an attempt to confer legitimacy to their political ideologies. Right wing and populist parties in the West are on the offensive and are now threatening the democratic traditions of a continent referred to as the birthplace of democracy, liberalism and Enlightenment. It challenges the legitimacy of national governments and threatens to restore extreme forms of nationalistic reactions that constitute direct threats to peace, reconciliation and international cooperation. It remains a paradox that countries in Central and Eastern Europe – often the most vocal critics of the arrival of migrants and refugees – have one of the lowest percentages of people belonging to Islam. These are the countries that have benefitted most from inter-EU migration and from an open labour market. Populism, however, does not arise out of nowhere. Establishment political parties have catered to the wealthy and failed to address burning social issues, thus creating a vacuum into which political opportunists could move.

Another feature that is ubiquitous is the tendency to externalise responses to address the plight of people on the move. In this regard, fences and walls have been erected and borders sealed off in an attempt to outsource and externalise solutions to address the rise of people on the move. In addition to the notorious wall between US and Mexico, which will be made even more repellent, and to the no less notorious one cutting off the Palestinian Occupied Territories, border fences and wires have been erected between the borders of Spanish enclaves (Melilla, Ceuta)/Morocco, Slovenia/Croatia, Hungary/Croatia, Hungary/Serbia, Macedonia/Greece, Turkey/Greece and Bulgaria/Turkey. Hungary has also considered erecting a fence along the Hungarian/Romanian border in response to the influx of people on the move.

Although it is the sovereign right of every country to implement measures deemed appropriate to protect their national borders, these physical barriers can come in conflict with the right of people to seek asylum as stipulated in article 14, paragraph 1, of the 1948 Universal Declaration of Human Rights (a right, however, not included in the International Covenant on Civil and Political Rights), and in the 1951 Refugees Convention, which defines a refugee as a person outside his country of nationality who has a well founded fear of persecution if returned to his country of origin. Providing assistance and protection to refugees is, therefore, in line with States’ obligations under international law and not only with their moral duties to respond to the dire situation many desperate people are facing. In this connection, it is worth referring to Pope Francis’s tweet made on 18 March 2017 where he appealed to decision-makers to not “build walls but bridges, to conquer evil with good, offence with forgiveness, to live in peace with everyone.” Pope Francis has likewise urged societies “to welcome, to protect, to promote, and to integrate migrants and refugees”.

The origin of attempts in Europe to “externalize” solutions to the refugee and migrant crisis can be traced back to the 1990 Dublin Convention. The latter stipulates the right to deport migrants and refugees to the first country of arrival, primarily to Greece, Spain and Italy, which are the first European entry points for people on the move owing to their geographical location. Countries bordering the Mediterranean Sea therefore are faced with the burden of absorbing the migrant and refugee inflows from the MENA region. This approach has contributed to an unfair distribution and relocation system of migrants and refugees where countries neighbouring bordering Syria and Iraq and then European countries situated on the Mediterranean Sea coast are the most affected. In the report of the United Nations Secretary-General addressing large movements of migrants and refugees – submitted in April 2016 to the United Nations General Assembly – he regretted that “too often, responsibility for new arrivals lies with the authorities and host communities in the first country of arrival.”

The European Union (EU) has also attempted to work with neighbouring states to defuse the crisis and to externalise solutions to control the flow of people on the move. It appears that the EU has drawn inspiration from the Australian government that have established refugee camps in neighbouring countries such as the island state of Nauru to address the inflow of refugees. In this connection, an agreement was reached between EU and Turkey, in March 2016, which stipulates, inter alia, that Ankara accepts the return of illegal migrants entering Europe. In counterpart, the EU would commit to investing EUR 3 billion to support livelihood projects for returning migrants. A similar position has also been taken vis-à-vis another migratory transit country Libya, in which the EU is committed to supporting the endeavours of the Libyan government to detain migrants and refugees in confinement camps. In response to this practice, the former UN High Commissioner for Human Rights Zeid Ra’ad al Hussein referred to the detention of migrants and refugees in Libya as “an outrage to humanity”.

Despite these attempts to outsource solutions to the migrant and refugee crisis, inflows of people on the move have not ceased as the main destination regions of migrants and refugees remain the advanced and developed countries in Northern Europe. In this connection, the migrant and refugee crisis is not sustainable in the long run either for Europe or for the Arab region. The rise of populism in Europe – which so far remains political in nature – and the rise of violent extremism in the Middle East – which is an immediate threat – endanger the long-term stability of both regions and has the potential to stir an even bigger migrant and refugee crisis in the future. The root-causes of the unprecedented flow of people on the move have multiple causes, which require a multilevel response. It is imperative that decision-makers recognise the multitude of factors that contribute to the forced displacement of people. Most importantly, peace and stability and a climate conducive to the development of and the respect for human rights must be restored. It is hard to imagine why refugees and migrants would return to their home societies if sustainable and alternative livelihood options are not in place to meet the individual and collective needs of peoples and societies, and if wars and armed conflicts continue unabated.