International media watchdogs, such as Reporters Without Borders and the International Press Institute, as well as major institutions such as the European Commission, have raised concerns about press freedom in Slovakia as big businesses buy up local media houses and politicians attack journalists. 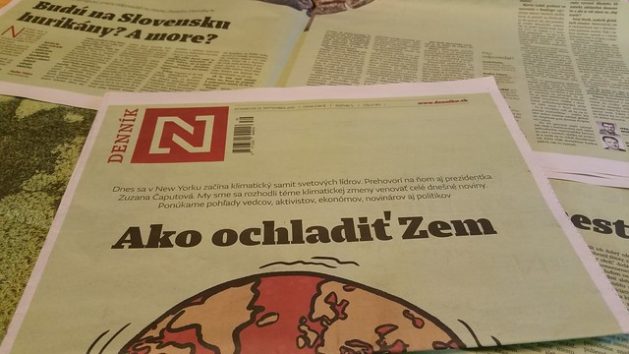 Sep 27 2019 (IPS) - In 2014, worried about editorial independence after local businessmen bought a substantial stake in the major Slovak daily newspaper they worked at, a small group of journalists left in protest and set up their own paper run solely by the journalists themselves to ensure impartiality.

Written off by many media analysts at the time who said starting a completely new independent newspaper would be an impossible task, Dennik N – Dennik is the Slovak word for daily newspaper and the N stands for Nezavislost, which means independence – is today one of Slovakia’s most popular news outlets with both print and web versions.

Determined to maintain its editorial independence, from the start the paper has used a subscription model to generate the majority of its funding.

A group of six people from the Slovak global IT security company ESET invested in the paper in its first year of operations, taking a 51 percent share in the company which publishes the newspaper. They still hold that share today with the remaining 49 percent owned by the paper’s journalists. Specific agreements with the six businessmen forbid them from having any editorial involvement in the newspaper.

They went on to develop the Readers’ Engagement and Monetisation Platform (REMP), an open source software and subscription platform that allows them to engage directly with subscribers so they can tell publishers what they want to read—effectively proving that Slovak readers want quality, independent journalism and are prepared to pay for it.

Lukas Fila, one of the original founders of Dennik N and now chief executive of the company which publishes the paper, speaks to IPS about the advantages of the paper’s subscription model, how growing numbers of readers consider it completely normal to pay for quality journalism content, threats to press freedom in Slovakia and helping media elsewhere copy their success.

Inter Press Service (IPS): Your newspaper was founded by journalists, including yourself, who left another Slovak daily because of fears over editorial independence after a major local business group took a large stake in the paper. Your newspaper decided to use subscription as its main funding source to try and ensure you could maintain editorial independence. Is it not possible for newspapers – in Slovakia or elsewhere – to be editorially independent without relying on subscriptions for the majority of their financing?

Lukas Fila (LF): Of course it is possible. Firstly, many would argue that editorial independence is not strictly related to economic independence. In other words – that you can do good journalism regardless of whether you’re earning enough to sustain your operation in the long run on a commercial basis. And you could probably find examples of this, although it is not a view we share.

Secondly, there are also other business models that allow media organisations to earn enough money, especially through advertising revenue or specialised products, such as organising conferences, selling books, or providing specialised analyses.

However, digital subscription has several advantages – the number of people who are starting to realise that it’s normal to pay for online content is growing. Moreover, it is most closely associated with the essence of journalism – providing quality content to your audience. It forces you to constantly think about ways of providing content that people feel is worth paying for.

IPS: Simply being majority funded by subscriptions would not alone guarantee editorial independence. How do you ensure you remain editorially independent, especially given that a group of very rich local businessmen, have a majority stake in your newspaper?

LF: The six co-owners of ESET have a 51 percent stake in the company. The shareholders’ agreement has various provisions guaranteeing editorial independence, for example a clause which makes it impossible for them to fire the editor in chief. However, what is most important is that our owners have no dealings with the state or other commercial conflicts of interests, they currently have no role in the management of the company, and at no point have they in any way tried to influence the content of the paper. This is despite the fact that they have come under heavy attack from politicians who feel threatened by our reporting. Editorial independence is not really an issue at Dennik N, we have the greatest independence imaginable.

IPS: Have any other major Slovak news outlets followed your subscription-based model and if so, have they done it to maintain editorial independence?

LF: Subscription-based models were being tried in Slovakia even prior to our launch. One of my colleagues, Tomas Bella, was the founder of Piano, which is currently a global leader in providing pay wall systems to publishers. There are several Slovak publications that are successful at running subscription schemes, their motivation is both editorial and commercial.

IPS: At a time when many news media all over the world are facing problems to remain financially sustainable, do you think the model you have adopted is sustainable in the long-term?

LF: Our model is probably most immune to changes on the market. While advertising revenue can change dramatically, having a loyal subscription base is something you can rely on in the long run.

IPS: Your newspaper was originally largely a political and investigative news publication. Did you decide to take that specific relatively narrow focus because you believed there was a gap in the market for that and/or Slovak readers wanted a newspaper like that?

LF: The focus is no longer as narrow. We currently provide diverse content – we do sports, lifestyle, culture, science, we do podcasts, books, educational projects, and we just launched a business publication called Dennik E.

In a good month our traffic exceeds 1 million unique visitors in a country of 5 million people. You can’t really achieve those numbers with a very narrow focus. The initial format was the result of several factors – the type of journalists that decided to start Dennik N, our idea about what type of content would best attract the first group of subscribers, an effort to keep costs down at what was already a costly and risky enterprise. We started with under 50 people and 6,000 people that supported us in our crowdfunding stage. We currently have more than 70 people working here and 42,000 subscribers. And we hope to expand further.

IPS: Could REMP help other newspapers which want to move more towards reader-based funding to maintain their editorial independence?

LF: Yes. The system is being used by several Czech and Slovak publishers and is being tried out by several large publishers outside the [Central European] region. The advantage of REMP is that our whole survival was dependent on it. We really had no other major focus than the quality of our journalism and the ability to monetise it. That is a big advantage over those that develop similar products only as a product to be used by others.

IPS: Slovakia has fallen down the international media watchdog Reporters Without Borders’s press freedom index in recent years with the group, as well as the European Commission, raising concerns over editorial independence in local media as oligarchs have bought up media houses and politicians have repeatedly attacked journalists. Do you feel press freedom in Slovakia is under serious threat?

LF: We’ve had this feeling since we started Dennik N. That was the primary motivation [for starting the newspaper]. One could argue that our success helped the situation at least to a small degree – it is now obvious that the entire market cannot be controlled by oligarchs, plus it probably gave journalists in other editorial rooms more courage to speak up. But the ownership changes are still not over, and sadly, they are usually for the worse. If you add in uncertainty about the results of next year’s parliamentary elections [in Slovakia], the situation could deteriorate quickly.

LF: It is becoming more and more obvious that the primary responsibility of politicians [in the killings of Kuciak and Kusnirova] is in the fact that there existed a system in which oligarchs and mafiosi could control law enforcement agencies and the courts. That gave them a sense of being untouchable, which eventually led to the tragic events. That is a much more serious thing than just attitudes to journalists.

But their attitudes are also important, and no, with the brief exception of a few weeks after the killings, they have not changed, and if so, perhaps for the worse. Among some leading politicians, there exists a mix of authentic paranoia and cynical delegitimisation through explicit attacks on journalists, which we now see even in parts of the West.

IPS: Legislation passed this month in Slovakia will give politicians the chance to demand a ‘right to reply’ from newspapers which publish stories politicians say are untrue or misleading. Do you think this is an attempt to interfere in editorial independence in Slovak media?

LF: This was tried before [with the same legislation] and didn’t lead to any dramatic consequences. There are dangerous trends in Slovakia, but I would not see this piece of legislation as something we need to worry about too much.

IPS: When President Zuzana Caputova took office earlier this year, did Slovakia’s journalism community think that press freedom in Slovakia might improve in any way, and if so, how and why?

LF: The role of president in Slovakia is largely symbolic. That is not to say that symbols are not important. I think President Caputova has brought good energy and represents the right values. And if democracy is ever threatened, she can play a vital role. But in terms of media legislation, the way in which politicians communicate with the press, or actual threats to journalists, her powers are limited. It is good to know that attacks against the free press will not go unnoticed, but the legislature and executive have a greater impact on the everyday functioning of the media.

LF: We are trying our best to help others, at least in the region – last year we launched Dennik N in the Czech Republic, in cooperation with local investors and journalists. After less than a year, they have over 11,000 subscribers and we hope they can copy our success. Similarly, we are looking at other markets. This is the most we can do. But I have no universal answers, different markets have different problems.