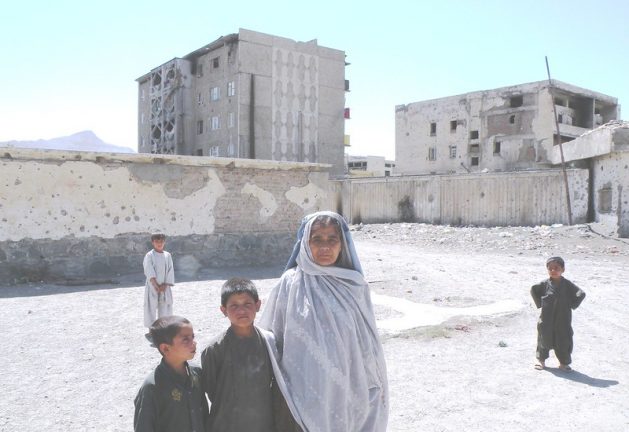 A new United Nations report on children and armed conflict in Afghanistan found that 12,599 youngsters had been confirmed killed or injured by fighting between 2015-2018 — 82 percent more than between 2011-2014. A mother and her children who live amid bomb rubble on Kabul's outskirts in this picture dated 2008. Credit: Anand Gopal/IPS

UNITED NATIONS, Oct 4 2019 (IPS) - The United Nations has warned that the past four years were among the deadliest for children in Afghanistan since the United States-led invasion of 2001, with nearly 13,000 youngsters killed and injured in that period.

U.N. secretary-general António Guterres’ new report on children and armed conflict in Afghanistan found that 12,599 youngsters had been confirmed killed or injured by fighting between 2015-2018 — 82 percent more than between 2011-2014.

The report serves as a potent reminder that while peace talks between the U.S and the Taliban, a hardline Afghan militant group, have made fitful progress, life for ordinary Afghans remains blighted by violence and hardship.

Speaking with reporters on Thursday, U.N. spokesman Stephane Dujarric said Guterres was “deeply disturbed by the scale, severity and recurrence of grave violations endured by boys and girls” in Afghanistan over recent years.

“The recruitment of children, mostly by armed groups, including the Taliban and Daesh, continued to be documented, as were over 800 attacks on schools and hospitals,” added Dujarric, using an alternate name for the Islamic State (IS) group.

The 17-page study, which bore Guterres’ name but was compiled by his special envoy on children in wartime, Virginia Gamba, said that youngsters made up almost a third of all civilian casualties in Afghanistan.

They were mostly killed or maimed by fighting on the ground, improvised explosive devices, airstrikes, suicide bomb blasts, and from unexploded weapons that detonated unexpectedly after they were deployed.

“Children in Afghanistan have known nothing but heartbreaking realities as a result of violence and war,” Gamba said in a statement accompanying her report.

“The number of child casualties is appalling, and I urge all parties to immediately put an end to the suffering of children.”

The U.N. blamed the Taliban, Afghanistan’s branch of IS, and other armed groups for most (43 percent) of the 3,450 children who were killed and 9,149 others who were maimed in the 18-year-old war.

Still, 30 percent of child casualties were blamed on Afghan security forces, pro-government forces, the U.S. and other international partners — a large increase on the previous four-year period.

Gamba noted the growing civilian death toll since the Afghan Air Force became capable of launching aerial attacks in 2015. Since the beginning of that year, some 1,049 children were killed or injured in attacks from the skies.

In one extreme case, Afghan Air Force helicopters in April 2018 fired rockets and heavy machine guns at an open-air graduation ceremony at a madrasa in Dasht-e Archi district of Kunduz Province, killing at least 30 children and injuring 51 others, the report said.

The Taliban, IS and Afghan security forces continue enlisting children as soldiers, the report said. Once they are released from service in militant groups, youngsters frequently end up in jail on national security charges.

“While the protection and well-being of children can only be reached through long-term peace, we must seize all available opportunities to improve right now the protection of boys and girls in Afghanistan,” added Gamba.

The report comes after U.S. and Taliban negotiators struck a draft peace deal last month aimed at leading to drawdowns of the 14,000 U.S. troops and thousands of NATO troops in the landlocked, South Asian country.

U.S. President Donald Trump broke off talks after Taliban militants carried out a Sept. 5 bomb attack in the capital Kabul that killed 12 people, including a U.S. soldier. Pakistan and the Taliban have since called for a fresh round of negotiations.

The Taliban currently controls more territory than it has since 2001, when the U.S invaded following the 9/11 attacks. The war has become deadlocked, with casualties rising among civilians and combatants despite fitful progress at peace talks in Qatar.