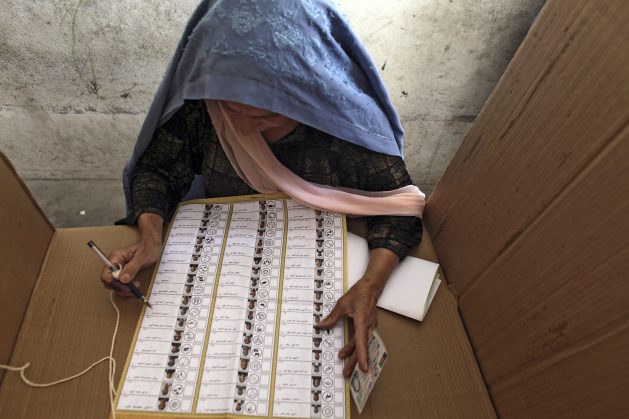 The United Nations Assistance Mission in Afghanistan documented some 100 attacks in the Afghanistan’s presidential election period, from Jun. 8 to Sept. 30. Some 85 civilians died and 373 others were injured. Pictured here is a dated photo of the country’s 2009 elections. Courtesy: UN Photo/Tim Page

The U.N. Assistance Mission in Afghanistan, known as UNAMA, documented some 100 attacks in the country’s election period, from Jun. 8 to Sept. 30, which claimed the lives of 85 civilians and injured 373 others.

On polling day itself, Sept. 28, some 249 civilians were injured and another 28 were killed, with children making up more than one-third of the victims in a day of carnage across the turbulent South Asian country.

The bloodshed underscores the fragile state of Afghan democracy and the relative strength of Taliban insurgents some 18 years after the United States and others invaded the country in a bid to tackle terrorism that has dragged on far longer than expected.

Tadamichi Yamamoto, head of UNAMA and the world body’s envoy to Afghanistan, lauded Afghans who bravely “defied the threats” and “cast their votes” despite fears of Taliban gunfire, grenades and other perils.

“These attacks, along with public statements made by the Taliban, revealed a deliberate campaign intended to undermine the electoral process and deprive Afghan citizens of their right to participate in this important political process, freely and without fear,” said Yamamoto.

Some 95 percent of the attacks were the work of the Afghan Taliban group, which has been waging an insurgency since it was toppled by a United States-led coalition following al-Qeada’s Sept. 11, 2001, attacks on the U.S.

Most of the Taliban strikes were carried out with grenades, rockets and mortars, but some home-made bombs were also planted near polling stations, which included schools, researchers said in the eight-page report.

Speaking with IPS and other reporters in New York on Tuesday, U.N. spokesman Stephane Dujarric blamed “most of the violence” on the “Taliban’s deliberate campaign to disrupt Afghanistan’s presidential election”.

“The report not only documents the harm to civilians caused by the Taliban’s violent offensive to disrupt the election but also highlights a pattern of abductions, threats, intimidation and harassment carried out by the Taliban against civilians,” Dujarric said.

Only about one-quarter of eligible voters cast their ballots — a low turnout of an estimated 2.6 million votes that was attributed to Taliban threats and concerns over the fairness of elections in a country that is riddled with graft.

Though the vote was safer than a parliamentary ballot in 2018, Afghanistan has since been gripped with political uncertainty and the front-running candidates complaining about the process even before a result has been called.

The leading candidates — President Ashraf Ghani and his main rival Chief Executive Abdullah Abdullah — both claimed victory on polling day, even though preliminary results will not be released until this Saturday at the earliest.

Unless one of the candidates secures a majority of more than 50 percent, the elections will proceed to a second round. The Independent Election Commission says that biometric voter verification and other safeguards have cleaned up Afghan elections.

The U.S. invaded Afghanistan in October 2001, weeks after the 9/11 attacks, to topple the Taliban. The hardliners regrouped and have waged a fierce insurgency for years against the government, US forces and other Western allies in Afghanistan.

The Taliban control more of Afghanistan than at any time since its regime was toppled in 2001, and government security forces are struggling to contain the militants as several rounds of U.S.-Taliban peace talks in Qatar have so far failed to clinch a deal.

In another report released on Tuesday, the International Crisis Group, a research and advocacy organisation, warned that 2018 was Afghanistan’s deadliest year yet, with a death toll comparable to the Syrian and Yemen wars combined.

The group warned of “extended political wrangling” between presidential candidates should they contest the outcome of the presidential vote, while noting the “glimmers of an opening for the resumption of U.S.-Taliban talks”.

“If talks restart and produce a deal, that could mark the beginning of a serious peace process. If, on the other hand, they remain frozen, Afghanistan may descend into worsening violence,” the group said in a statement.