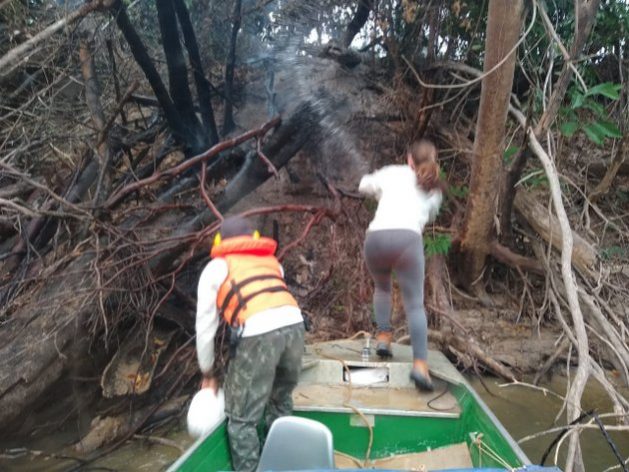 The fire reached the banks of the Madeira River, near Porto Velho, capital of the state of Rondônia, in northwestern Brazil, where there were 4,715 fires from January to Aug. 14 this year, according to monitoring by the Amazon Environmental Research Institute. Credit: Courtesy of biologist Daniely Felix

RIO DE JANEIRO, Aug 23 2019 (IPS) - August is the month of major political crises in Brazil, but no one suspected that an environmental issue would be the trigger for the storms threatening the government of President Jair Bolsonaro, just eight months into his term.

Protests against the fires sweeping Brazil’s Amazon rainforest are spreading around the world, especially in Europe, and are beginning to be held in Brazil, where they are expected to rage over the weekend in at least 47 cities, according to the Climate Observatory, a coalition of environmental organisations.

“Bolsonaro Out!” is the cry heard in the streets of Barcelona, London, Paris and other European cities, and in Brazilian ones as well.

The increased use of fire to clear land for agriculture, since July, seems to be a reaction to the insistence with which the president and his Environment Minister Ricardo Salles have insulted the environmental movement and dismantled the system of environmental protection, reviving the appetite of landholders, especially cattle ranchers, for clearing land.

“The crisis became political because of the response by Bolsonaro, who, instead of announcing measures to address the problem, decided to politicise it,” Adriana Ramos, public policy advisor for the Social-Environmental Institute (ISA), told IPS.

The first reaction by the far-right president was to blame the forest fires on nongovernmental organisations (NGOs), such as ISA – precisely the ones that have worked the hardest to promote environmental policies and laws in this megadiverse country of 201 million people. 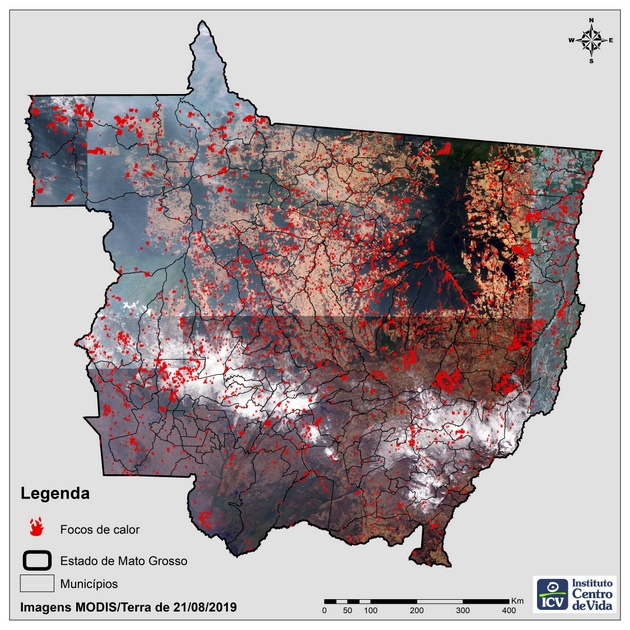 Map of fires in Mato Gosso, the Brazilian Amazon state most affected by fires, and the largest soybean producer. The highest concentration occurs in the center-north of the state, the area with the highest production of soybeans, corn and cotton. In the extreme northwest is Colniza, the municipality that registered the largest number of fires, and which illustrates the encroachment by agriculture in the rainforest: Courtesy of the Life Science Institute

The stance he took was a clear indication that Bolsonaro does not intend to assume his responsibilities, but will look for culprits instead, as he has done on many issues, from economics to public safety, since he became president on Jan. 1.

“Bolsonaro does not need NGOs to smear Brazil’s image around the world,” says a communiqué protesting his remarks, signed by 183 Brazilian civil society organisations.

This is “an international crisis,” said French President Emmanuel Macron, who announced that he would address the issue at the Aug. 24-26 summit of the Group of Seven (G7) advanced economies in Biarritz, in southern France.

Both France and Ireland have made it clear that they will not ratify the free trade agreement between the European Union and the Southern Common Market (Mercosur – Argentina, Brazil, Paraguay and Uruguay) if the Brazilian government continues to violate its environmental and climate commitments.

Comparative table on fires with respect to the same period in 2018, with a cumulative increase this year of 87 percent until Aug. 19 August and 205 percent between Jul. 15 and Aug. 19. Credit: Courtesy of the Life Science Institute

The exponential increase in the use of fire to clear land is a reflection of the expanding deforestation, according to the non-governmental Amazon Environmental Research Institute (Ipam).

This year, as of Aug. 14, the number of fires rose to 32,728, 60 percent more than the average for the past three years. Drought, a common factor in this destruction, does not explain the fires on this occasion, as the current dry season is less severe than in previous years.

In central-western Mato Grosso, Brazil’s largest soybean-producing state, there were 7,765 fires, compared to just over 4,500 in the previous two years, when there were strong droughts.

Colniza, the most affected municipality in Mato Grosso, is an example of the expansion of the agricultural frontier.

Vinicius Silgueiro, geotechnology coordinator at the local Life Centre Institute (ICV), told IPS that the fires were set both to “clean up” the area deforested in previous months and to “weaken” the primary forests for subsequent deforestation.

“A sensation of impunity and the dismantling of the institutions for environmental oversight and conservation provoked the resurgence of the slash-and-burn technique,” he said.

The cutting in half of the budget of the Prev-Fire, a system for preventing and fighting forest fires, was one of the factors, he said.

“In addition, the presidential discourse and his attacks” on the government agencies that monitor and combat deforestation “encouraged” the sectors that destroy forests illegally, he argued.

The effects are not limited to the Amazon jungle. Clouds of smoke darkened the skies over São Paulo on the afternoon of Aug. 19 and burn particles were identified in local rain, about 2,000 kilometres from the probable sources: Santa Cruz de la Sierra in Bolivia, or the Brazilian states of Mato Grosso in the southwest and Rondônia in the northwest.

São Paulo, a metropolis of more than 22 million people, has been suffering from this kind of air pollution for more than a decade, due to the burning of extensive sugarcane fields in nearby municipalities in the interior of the southeastern state. 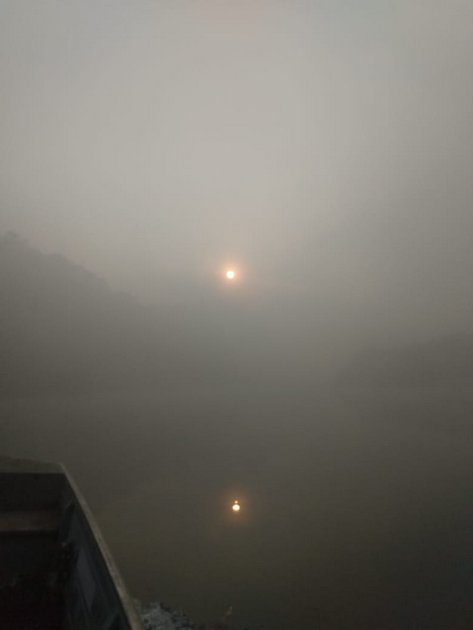 The smoky air over Porto Velho, capital of Rondônia, an Amazonian state in the northwest of Brazil, on the border with Bolivia, where deforestation is also intense. Particulate air pollution from the fires is affecting health throughout the Amazon and even reached São Paulo, some 2,000 km southeast, on Aug. 19. Credit: Courtesy of biologist Daniely Felix

But the ban on the use of fire in the harvesting of sugarcane and its mechanisation eliminated that factor of respiratory illnesses, which has now reemerged as a result of the fires in the distant rainforest.

But the Amazon jungle is indispensable for feeding the rains in the areas of greatest agricultural production in south-central Brazil.

That’s why big agricultural exporters are now calling for government measures to curb deforestation. They fear trade sanctions by importers, especially in Europe, which at this stage seem unavoidable.

The agribusiness sector was an important base of support for Bolsonaro’s triumph in the October 2018 elections.

It has a strong parliamentary “ruralist” bloc and mainly consists of anachronistic segments seeking profits by expanding their property rather than boosting productivity, such as extensive cattle ranching, which is encroaching on the rainforest and indigenous lands, undermining environmental conservation.

The devastation of the Amazon “was foreseeable” since the electoral campaign, because of Bolsonaro’s discourse in favor of “predatory exploitation of forests and indigenous reserves,” said Juarez Pezzuti, a professor in the Nucleus of High Amazon Studies at the Federal University of Pará (UFPA).

“We, the researchers of the Participatory Biodiversity Monitoring programme, can no longer visit study areas” in the middle stretch of the Xingu River Basin, in the Eastern Amazon, “because it is not safe,” he told IPS from the northern state of Pará.

The “grileiros,” the people who invade public lands, destroy forests and threaten to attack local residents and researchers, he said.

This environmental crisis has political consequences.

Since January, Bolsonaro has lashed out at the widest range of sectors, upsetting large swathes of society, including students, scientists, lawyers, artists and activists of all kinds.

At any moment one of his outbursts could become the last straw. The environmental issue could seriously damage his popularity, which has been declining since the start of his term, as protecting the Amazon rainforest has the support of a majority of Brazilians as well as much of global society.

“Let’s wait and see what the taskforce created by the government can do to address the problem. We have to give it the benefit of the doubt for the sake of the greater collective interest” – the conservation of the rainforest, said ISA’s Ramos, from Brasilia.

As he saw his image threatened due to the fires in the Amazon, Bolsonaro decided to install a “crisis cabinet” of his ministers to discuss measures against the use of fire to clear land, which has upset people throughout Brazil and around the world this month.