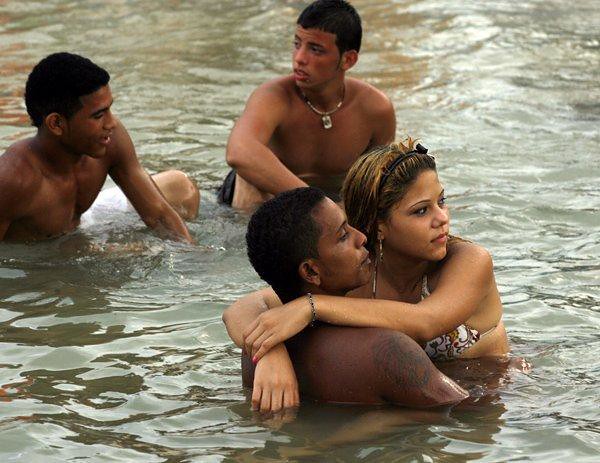 A new report found that most adolescents across the globe are not getting enough exercise as screen time increasingly replaces physical activity in homes across the world. Credit: Jorge Luis Baños/IPS

UNITED NATIONS, Nov 27 2019 (IPS) - It is a common complaint of parents globally that their children and teenagers spend far too many hours sprawled on couches playing video games, sharing selfies with online friends and giggling over TikTok videos.

Now, the call for youngsters to put down their mobile devices and head outdoors for some healthy activity comes with the backing of researchers at the World Health Organisation (WHO), a United Nations agency.

Dr Regina Guthold, a WHO expert on child and adolescent health, said her new report found that most adolescents are not getting enough exercise as screen time increasingly replaces physical activity in homes across the world.

The 13-page study, published in The Lancet Child & Adolescent Health journal, found that more than four-fifths of schoolchildren aged 11-17 years do not get the recommended one hour of physical activity per day.

“The electronic revolution has led to changes in movement patterns among adolescents, replacement of active play with digital play, less walking and more sitting, slowing down or compromising efforts that have been made to increase physical activity,” Guthold told IPS.

Researchers gathered data from 1.6 million schoolchildren across 146 countries from 2001 to 2016.

They found that 81 percent of youngsters did not get their daily hour of exercise. This broke down to 85 percent of girls, compared to 78 percent of boys.

This is a problem, said Guthold. Active adolescents have healthier hearts, bones, muscles and tend not to become overweight. There is also evidence that exercise helps teenagers socialise and think more clearly.

Over a lifetime, being active can lower the threat of many diseases, from heart attacks to strokes and diabetes.

There are big variations around the world. Some 97 percent of South Korean girls do not get their hour-a-day of activity. The Philippines is a laggard for boys, with only 93 percent getting a healthy amount of exercise.

Researchers noted relatively low rates of inactivity among boys in Bangladesh (63 percent), India (72 percent) and the United States (64 percent) — which was attributed to South Asia’s obsession with cricket and the emphasis on sports at American schools.

While Guthold could not definitively blame Snapchat and Instagram for a generation of inactive youngsters, she said that it was likely the root cause for a phenomenon that can be observed from Albania to Zimbabwe.

“We speculate that the electronic revolution has contributed to most countries not having been successful in reducing insufficient activity levels,” Guthold, an expert on healthy lifestyles for the Geneva-based group, told IPS.

Researchers also noted that the gap between boys and girls is widening.

Girls were less active than boys in all but four countries — Tonga, Samoa, Afghanistan and Zambia.

The starkest difference between boys and girls is found in the United States and Ireland. In those two countries, 64 percent of boys and a much greater 81 percent of girls are inactive, researchers said.

“The trend of girls being less active than boys is concerning,” said Dr Leanne Riley a co-author of the study.

“More opportunities to meet the needs and interests of girls are needed to attract and sustain their participation in physical activity through adolescence and into adulthood.”

Another WHO researcher, Dr Fiona Bull, said governments should tackle the gender gap.

Officials need to address the social, economic, cultural, technological, and environmental reasons that boys get more exercise than girls — and then do something to tackle inequalities.

“Countries must develop or update their policies and allocate the necessary resources to increase physical activity,” said Bull.

“Policies should increase all forms of physical activity, including through physical education that develops physical literacy, more sports, active play and recreation opportunities.”