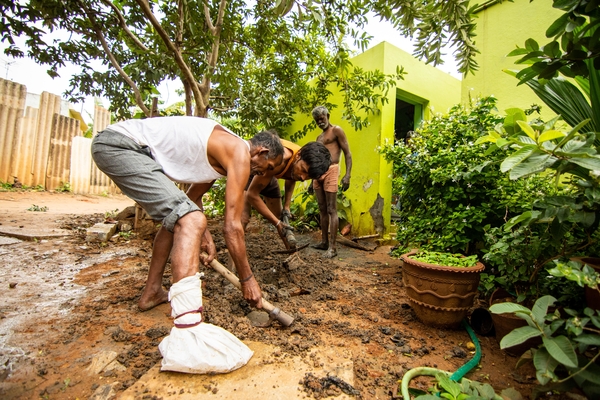 UNITED NATIONS, Nov 15 2019 (IPS) - People who empty out sewage tanks and scrub down latrines doubtless perform a vital, thankless and even undesirable task. A new report, however, shows that doing such jobs could also cost workers their lives.

A study from the World Health Organization (WHO) and others has revealed that millions of sanitation workers in low-income countries are routinely exposed to contagious bugs, powerful chemicals and filthy conditions that can turn out to be deadly.

The 61-page study titled ‘Health, safety and dignity of sanitation workers‘ holds up the world’s sanitation workers as unsung heroes who risk their lives cleaning other people’s muck, saying they should at the very least get protective clothing and basic employment rights.

The report by WHO, together with the International Labour Organization, the World Bank, and WaterAid, a charity, described people around the world emptying pits and septic tanks, cleaning sewers and manholes and handling fecal sludge at treatment and disposal works.

Researchers shone a spotlight on the case of Wendgoundi Sawadogo, a sanitation worker in Ouagadougou, capital of the landlocked West African country, Burkina Faso, a city of some 2.4 million people.

The 45-year was photographed climbing into latrines and open pits, holding muck-smeared ropes without gloves. In a statement accompanying the report, he described finding discarded syringes and broken calls in fetid pits.

Sawadogo spoke of colleagues struggling to lift the concrete slabs that cover pits, occasionally breaking fingers, toes, and feet. The work is “really dangerous” and some of his co-workers have perished in such trenches, he added.

“You have no paper to show that this is your profession. When you die, you die,” said Sawadogo.

“You go with your bucket and your hoe without recognition, without leaving a trace anywhere or a document that shows your offspring that you have practiced such a job. When I think of that, I’m sad. I do not wish any of my children to do the work I do.”

Another emptier in the same country, Inoussa Ouedraogo, described a slab crushing his finger in an injury that cost the 48-year-old about $100 in local currency during 11 months of “painful”  treatment, in which time he had to carry on working.

Researchers described sanitation workers toiling in sewage pits around the world without safety gear — risking exposure to cholera, dysentery and other killer bugs. Some 432,000 people perish from diarrhoeal deaths each year, the report said.

They also have to work in tanks amid fumes of ammonia, carbon monoxide, sulfur dioxide and other toxic gases that can cause workers to lose consciousness and die, or face long-term breathing and eyesight problems.

Few low-income countries have health and safety guidelines to protect sanitation workers, researchers said. There are no reliable global statistics, but it is estimated that one manhole worker dies unblocking sewers by hand in India every five days.

Dr Maria Neira, a public health director at WHO, called for much sanitation work to be mechanised so that workers do not have to touch human waste with bare hands. She called for better health and safety laws, training, protective gear, insurance, and health checks.

“Sanitation workers make a key contribution to public health around the world – but in so doing, put their own health at risk. This is unacceptable,” said Neira. “We must improve working conditions for these people.”