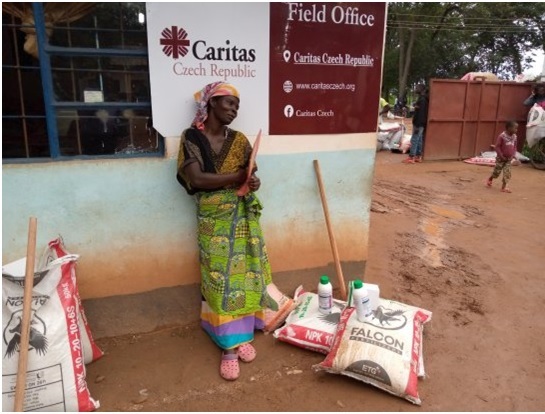 Luvunzu Mutwale, his wife, and their seven children are from the Katanga region in the Democratic Republic of Congo (DRC). They fled to neighboring Zambia in 2015 to escape civil unrest at home, and they currently live in the Meheba refugee camp in Zambia’s Northwestern province.

LUSAKA, Zambia, Feb 27 2020 (IPS) - The Mutwales farm a small plot of land in the camp, growing primarily cassava and maize for food. They are also one of the 105 refugee farming families participating in an initiative during the 2019/2020 growing season to help them cultivate nutritious, vitamin A-biofortified orange maize, which was developed by the International Maize and Wheat Improvement Center (CIMMYT) in partnership with HarvestPlus.

The initiative is part of a livelihoods project supported by the United Nations High Commission for Refugees (UNHCR) and implemented by CARITAS, a Catholic humanitarian organization.

“My family and I are most grateful to UNHCR for providing us with inputs to grow a half hectare of orange maize,” said Mutwale. “I have heard of the many nutrition and health benefits and I’m very delighted that after harvest, my family will experience them when we start consuming the maize.” Mutwale also hopes to be able to sell some of the harvest to earn income and invest in inputs for a second growing season and pay his children’s school fees.

Vitamin-A deficiency can lead to impaired vision—even blindness—and a higher risk of diarrhea and other infections. Pregnant women with vitamin A deficiency may be at increased risk of mortality. Nationally in Zambia, more than half of children under five are vitamin-A deficient.

Zambia has been a refugee destination for more than 50 years, primarily from Angola, the DRC, Rwanda, and Burundi. The three major refugee settlements are Meheba in Northwestern Province, Mayukwayukwa in Western Province, and Kala in Luapula province. Through the UNHCR, the refugees are provided basic food, shelter, and access to clean water and sanitation, as well as health services and education infrastructure.

The UNHCR livelihoods project is one of many social welfare interventions aimed at improving the well-being of refugees in the Zambian camps.

In addition to farmer training and nutrition education, Harvestplus Zambia also helps catalyze an orange maize business model for the farmers based on forging linkages with input suppliers and establishing formal contracts with maize purchasers (i.e., processors and offtakers).

The system helps build confidence on all sides, ensuring sufficient maize is grown as well as purchased. For example, Butemwe Milling, a local processor, has already placed an order for 10,000 bags of the refugee farmers’ orange maize at 50 kgs per bag, for a total order of 500 metric tons.

There was strong interest from refugee farmers to participate in the orange maize initiative—about 1,500 applied but resources were limited during the pilot. Selection criteria included the applicants’ level of economic vulnerability and the capacity of the household to grow the maize.

The 105 participating families received 10 kilograms of orange maize seed and various inputs required to cultivate a half hectare. The fertilizer and other inputs were procured through an open tender process, which attracted bids from several suppliers, including local agro-dealers. A true platform for business engagement in biofortification was created.

The objective is for the participants to eventually “graduate” to self-sustaining investment in orange maize cultivation after receiving start-up support during the 2019/20 season (which runs from about November 2019-May/June 2020). And if this pilot in Meheba camp provides successful, the program may expand to other refugee camps.

HarvestPlus and its partners are eager to get biofortified crops to refugees and other vulnerable populations who are at high risk of nutritional deficiencies and related health impacts.

Another refugee-focused project is under way in Uganda, where HarvestPlus is partnering with Self-Help Africa to support more than 1,000 households in eight refugee settlements and host communities in the northern Adjumani district.

HarvestPlus is a program of the CGIAR global research partnership for a food secure future and is based at the International Food Policy Research Institute (IFPRI), a CGIAR research center.

For more information about the work of HarvestPlus Zambia, contact Joseph Mulambu: j.mulambu@cgiar.org