In the southern African nation of Eswatini, women, who already have too many household chores, have had to spend many hours for days on end in the fields, tilling and weeding the soil. But thanks to the gradual introduction of Climate-Smart Agriculture, some are beginning to harvest the gains of more time for their families. 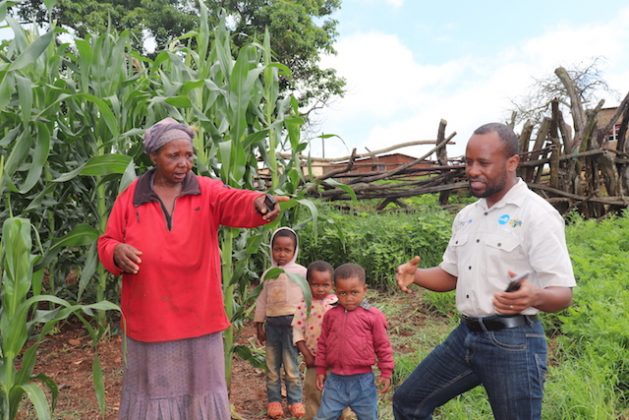 Mantfombi Msibi (left) and Bheki Ginindza, the Climate-Smart Market Oriented Agriculture project manager (right) talking in her field while her grandchildren look on. Thanks to Climate-Smart Agriculture, the 63-year-old Msibi no longer has to spend days on end weeding her fields. Credit: Mantoe Phakathi/IPS

NGWEMPISI, Eswatini, Feb 27 2020 (IPS) - Aside from the seven hours Mantfombi Msibi (63) would spend daily during the Eswatini farming season planting, applying herbicides and weeding her 1.2-hectare maize field, she would also spend E1 750 ($125) on tractor services. It was a huge cost of both time and money. But this season, Msibi will be benefiting from climate-smart farming technology that has opened up a new world of farming to her, saving her time in the process.

“Not only was this activity laborious for my ageing husband and I, but one of our grandchildren would be forced to abscond from school for several days just to help out with the work,” Msibi told IPS.

Besides cultivating the field, the family also has livestock; cattle, pigs and chickens, which also have to be taken care of. That excludes other household chores such as cooking and looking after her three younger grandchildren all whose parents passed away.

This season, Msibi was introduced to climate-smart agriculture techniques, which has significantly improved her life and that of her family. Compared to the amount of work that she used to do for many hours a day over several weeks, with the new climate-smart techniques of direct seeding and boom spraying, she only spends about five hours cultivating her field.

These are promoted by the Food and Agriculture Organisation of the United Nations (FAO) as part of the Climate-Smart Agriculture technique.

Now Msibi has no need to till the soil anymore because climate-smart technology destroys weeds, thereby saving her from the laborious weeding process.

“I now have enough time to look after other family responsibilities. Most importantly, I get time to rest and none of the children is forced to abscond from school because of farming,” said Msibi.

Msibi is one of the beneficiary farmers under the Ministry of Agriculture’s conservation agriculture programme, whose aim is to improve the uptake of Climate-Smart Agriculture.

According to Jabu Dlamini, the conservation agriculture chairperson for the Manzini Region, this technology applies herbicide that destroys weed without any residual effect to the soil.

“It’s a very environmentally friendly technology and that’s why the government is promoting it as a CSA technique,” Dlamini told IPS.

Besides the benefits to the environment, Dlamini said it reduces the number of time farmers have to spend in the field.

“When using the conventional way, a farmer would pay for seven to eight hours on a 1.2ha field for tractor services and would still have to do other things such as applying herbicides and weeding which is laborious,” said Dlamini.

Introduced as a pilot in two Regional Administrative Areas; Ngwempisi and Ntfonjeni, this programme is relatively new although it is gaining momentum among farmers.

“We’re working on the data for now on how many farmers are benefitting but those who have tried it don’t want to look back to conventional farming,” said Dlamini.

This technology follows research by the Climate-Smart Market Oriented Agriculture Project (CSMA) where it was discovered that women have too many household chores yet they still have to spend many hours for days on end in the fields.

This does not only limit the quality of their production but it also puts a strain on their health.
According to Bheki Ginindza, the CSMA project manager, the idea is to increase the uptake of the use of this technology by up to 30 percent because of its ability to reduce greenhouse gas emissions by up to 70 percent.

“This technology increases soil organic matter in that after harvesting the maize stalks are left to rot in the field which improves the soil health,” said Ginindza, adding: “The soil is a very important carbon sink.”

What is also a benefit about the direct seeder is that it uses much less fuel compared to its conventional counterpart in that it works for a much shorter time and its fuel consumption is less.

While this promises to be a good technology for farmers, it is relatively new in the country so there are fewer suppliers who are importing these types of tractors.

The CSMA is also promoting agro-forestry, which is a CSA technique where crops and trees are grown alongside the same field to improve soil health and food and nutrition security for the whole family.

“But the challenge is that farmers don’t like trees in their fields because they need to be maintained so that they don’t create shade for the crops,” said Ginindza. “The trees also attract thieves who want the fruits.”

The CSMA aims to support farmers to be climate-resilient, generate sustainable income, incorporate gender balance and reduce poverty in Eswatini. It is funded by the European Union (EU) through the Common Market for Eastern and Southern Africa (COMESA).