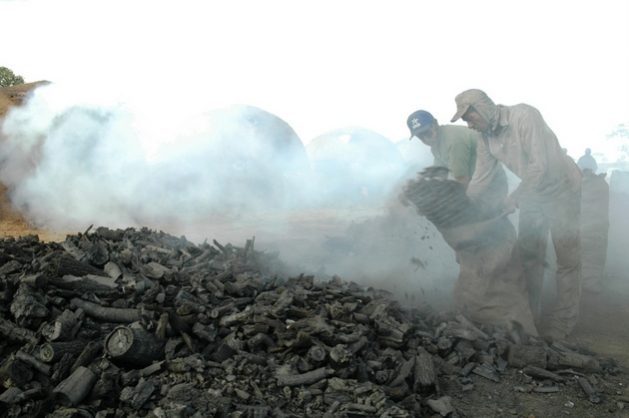 Workers produce charcoal in Andrequice, a town in the state of Minas Gerais in southeastern Brazil. The activity employs large numbers of workers who are subjected to modern slavery, in addition to damaging the environment by deforesting large areas. It was a frequent target of inspections carried out by the Mobile Inspection Team for Combating Slave Labour, especially during the first decade of this century. Credit: Courtesy of João Zinclar/CPT

RIO DE JANEIRO, Mar 5 2020 (IPS) - “Slave labour is not declining; it has taken on new forms and is growing; it expanded to new sectors where it did not previously exist,” said Ivanete da Silva Sousa, an activist in the fight against modern-day slavery in northern Brazil.

This scourge expanded from livestock farming, charcoal and sugar production and other rural activities to urban areas: the construction and textile industries, among other sectors, she told IPS.

As one of the founders of the Centre for the Defence of Life and Human Rights (CDVDH), created in 1996, Sousa has monitored the evolution of contemporary slavery, characterised by forced labour, excessive working hours, degrading conditions, and restrictions on freedom of movement, as typified by the Brazilian Penal Code.

The Centre was born in Açailandia, in the west of the state of Maranhão, because this municipality of 112,000 inhabitants was a hub of slave labour to produce the charcoal consumed by the local iron and steel industry, which exports pig iron, a product of smelting iron ore that is used in the production of steel.

"The discovery of slave labour in new parts of Brazil and new branches of activity revealed situations that probably existed already, but which until then no one had reported or which had not been sufficiently or properly investigated.” -- Xavier Plassat

It was also a hotbed of trafficking of virtually captive workers, as it was located on the border of Maranhão, the largest supplier of labour for degrading and illegal work, together with Pará, the Amazon jungle state where slavery conditions are rife.

For these reasons Carmen Bascarán, a Catholic lay missionary from Spain, chose Açailandia as the headquarters of the CDVDH, to put into practice her ideas to help the poor. She was the soul and leader of the Centre, which added her name to its own when she returned to her home country in 2011.

Street vendors of hammocks made in Ceará, another neighbouring state to the east, are recent examples of workers in slavery-like conditions identified in Maranhão, Sousa said from Açailandia in her dialogue with IPS.

Stores are also taking advantage of the new facilities provided by the use of the “hour bank”, adopted in the 2017 reform of the labour laws, to force their employees to work many extra hours and give up their weekly day off, without the obligatory compensation.

“Hours worked accumulate,” but the compensation in hours off in later days, as stipulated by the law, “never arrives,” said the activist, the administrative secretary of the CDVDH for the past six years.

The 2017 reform, defended as an adaptation to the current conditions in the economy and labour relations, offered new opportunities for the “modernisation” of slave labour: “It became more difficult for people to detect slave labour,” Sousa said. 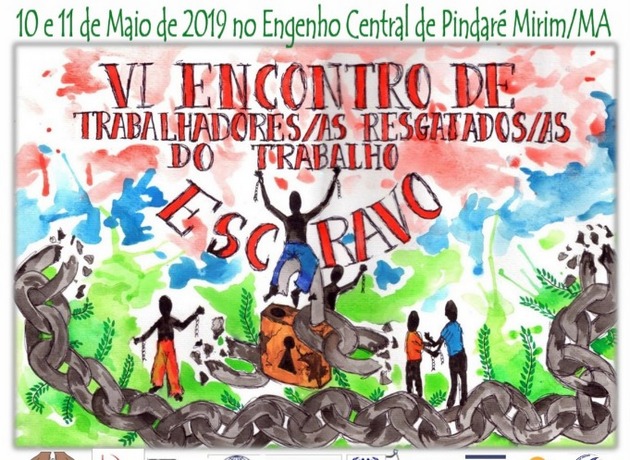 A poster from the latest gathering of workers rescued from neo-slavery conditions. Since 2014, the Centre for the Defence of Life and Human Rights has been organising these annual meetings, which are held in different locations in the state of Maranhão every year on May 13, the day the abolition of slavery in Brazil (in 1888) is commemorated. In the gatherings, workers discuss their experiences and how to overcome poverty and inequality in order to eradicate slave labour. Credit: Courtesy of CDVDH

The statistics collected by different government agencies engaged in the fight against slave labour also point to a complex picture which has evolved over time.

The Catholic Church’s Pastoral Land Commission (CPT) processed the data gathered from 1995 – when Brazil acknowledged the problem and began to combat it systematically – to 2019.

In the case of Brazil, a country of continental dimensions and with 220 million inhabitants, there are an estimated 369,000 workers in slavery conditions, according to a study based on data from 2016 and conduced in conjunction with the International Labour Organisation (ILO) and the International Organisation for Migration (IOM).

In the past 25 years, a total of 54,778 workers were rescued from slavery or degrading conditions by the authorities, especially the Mobile Inspection Team, which brings together people from the ministry of labour, the labour prosecutors office, and the police.

In this process, the rescue operations that were concentrated in the agricultural frontiers of the Amazon jungle states of Pará, Mato Grosso and Maranhão spread throughout the country, to the wealthier and more industrialised southern and southeastern regions as well.

Since 2006, the phenomenon has been expanding in urban areas, especially the construction and textile industries.

“The discovery of slave labour in new parts of Brazil and new branches of activity revealed situations that probably existed already, but which until then no one had reported or which had not been sufficiently or properly investigated,” Xavier Plassat, who coordinates the CPT’s campaign against contemporary slavery, told IPS.

“These statistics have to be analysed carefully”, because they can lead to misleading conclusions, Plassat, a Dominican friar, warned in an interview. 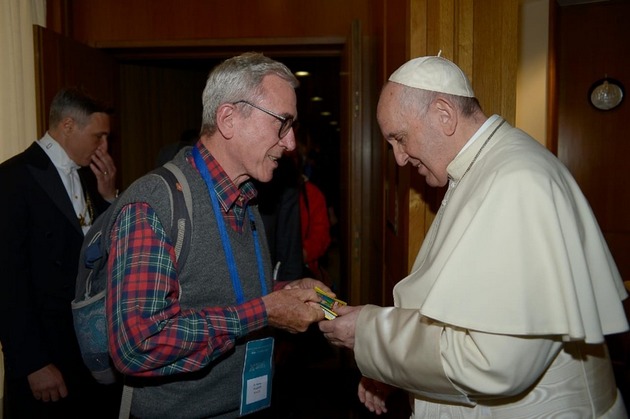 The large number of workers rescued in the first decade of this century, for example, was due to inspections in the sugar industry, which identified in one fell swoop hundreds of workers subjected to abusive conditions during the sugarcane harvest, he pointed out.

That situation changed quickly with the mechanisation of cane cutting, imposed by local governments in response to air pollution in nearby cities, created by the practice of pre-harvest sugar cane field burning.

One of the 169 targets of the Sustainable Development Goals (SDGs) calls for “immediate and effective measures to eradicate forced labour, end modern slavery and human trafficking and secure the prohibition and elimination of the worst forms of child labour”.
Dominican friar Xavier Plassat said the target, number 7 of SDG 8 on decent work, "has a concrete positive effect, but the governments of the last three years have forgotten the commitments" of the SDGs.
"What helps to promote the targets of SDG 8 in Brazil is the presence of the International Labour Organisation with a well-designed programme to combat slave labour that outlines what to do after the rescue" of the victims, said Plassat, who coordinates the Catholic Pastoral Land Commission’s efforts against slave labour in Brazil, in reference to the Integrated Action designed to keep workers from falling back into the trap.
At the international level, the Global Sustainability Network (GSN), which emerged in 2014 as a result of an international meeting of religious leaders of different faiths and denominations, also fights forced labour and other forms of human trafficking, especially promoting target 7 of SDG 8, by pushing for national legislation to combat new forms of forced labour slavery.

In the sectors of cattle breeding and farming, where some employers are abusive, there was a similar attempt to reduce the workforce by means of mechanisation, and to reduce the use of agrochemicals as well, said Plassat, who is from France and has lived in Brazil for 31 years.

In the charcoal industry, modern-day slavery was reduced by the heavy scrutiny and inspections triggered by multiple complaints, as well as by the loss of a large part of its market due to the crisis in the pig iron trade.

Finally, Plassat added, the economic recession in Brazil, which began in 2015, led to high unemployment, which made it less likely for workers afraid of losing their incomes – even when earned in terrible conditions in poor-paying jobs – to report abuses.

Complaints, and thus inspections and rescue operations, also fell off, possibly because employers resorted to different tactics to circumvent the crackdown on this form of trafficking in persons.

“They started to use smaller groups of workers, in short-term tasks, to avoid the risk” of being caught, said the friar, who also explained that employers abandoned the practice of transporting workers in large groups over long distances, to escape detection.

In the Amazon, “there is ‘surgical’ deforestation, which is on a smaller-scale and takes place in protected areas, where satellite images reveal nothing,” he said.

The result is that fewer workers in slavery conditions are detected, even though inspection operations have not been reduced.

Efforts to combat the phenomenon now require “more intelligence in the inspections, examining the companies’ books,” for example, he said.

The central government reduced the budget for the agencies fighting slave labour. However, the rescue operations continue because local authorities in some states are making a great effort, albeit with limited resources, to fight the problem.

Minas Gerais, Bahia, São Paulo and Goiás are the states that presented the best results in recent years, said Plassat from Araguaina, the city of 180,000 inhabitants where he lives in the central state of Tocantins, near Maranhão and Pará, the areas where the most numerous rescue operations were carried out in the first decade of the century.

The CPT and the CDVDH, which form part of the Integrated Action Network to Combat Slavery (Raice) that promotes initiatives aimed at “breaking the cycle of slave labour” in the heavily affected states of Maranhão, Pará, Tocantins and Piauí, stress the need for prevention rather than merely repression.

Addressing the vulnerabilities and lack of local alternatives that drive people into migration and forced labour, and training rescued victims to keep them from falling back into the trap, are necessary measures to effectively eradicate the new types of slavery.