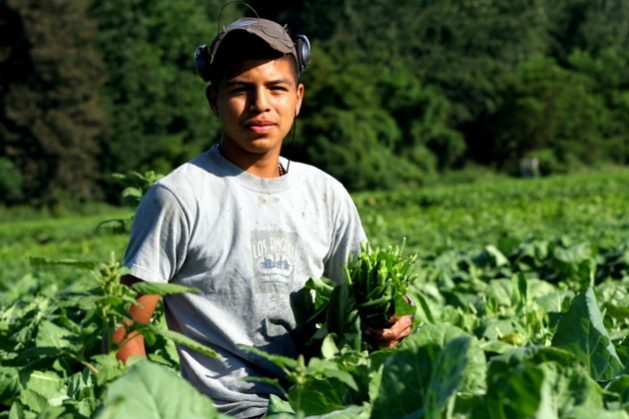 Considered essential to the U.S. economy, as Donald Trump himself now acknowledges, Mexico's seasonal farmworkers are exposed to the coronavirus pandemic as they work in U.S. fields, which exacerbates violations of their rights, such as wage theft, fraud, and other abuses. CREDIT: Courtesy of MHP Salud

MEXICO CITY, Apr 21 2020 (IPS) - As the high season for agricultural labour in the United States approaches, tens of thousands of migrant workers from Mexico are getting ready to head to the fields in their northern neighbour to carry out the work that ensures that food makes it to people’s tables.

But the SARS-CoV-2 (COVID-19) pandemic, of which the U.S. has become the world’s largest source of infection, threatens to worsen the already precarious conditions in which these workers plant, harvest, process and move fruits and vegetables in the U.S.

Exposed to illegal charges for visa, transport and accommodation costs, labour exploitation, lack of access to basic services and unhealthy housing, Mexican seasonal workers driven from their homes by poverty must also now brave the risk of contagion.

Evy Peña, director of communications and development at the non-governmental Centro de los Derechos del Migrante (Migrant Rights Centre – CDM), told IPS from the city of Monterrey that the COVID-19 pandemic is exacerbating violations of the rights of migrant workers.

“Temporary visa programmes are rife with abuse, from the moment workers are recruited in their communities. They suffer fraud, they are offered jobs that don’t even exist in the United States. It’s a perverse system in which recruiters and employers have all the control. There are systemic flaws that will become more evident now,” the activist said.

In 1943, the United States created H2 visas for unskilled foreign workers, and in the 1980s it established H-2A categories for farm workers and H-2B categories for other work, such as landscaping, construction and hotel staff.

Now, the two countries are negotiating to send thousands of farmworkers within or outside of the H2 programme, starting this month, to ensure this year’s harvest in the U.S. The Mexican government has polled experts to determine the viability of the plan, IPS learned.

The migrant workers would come from Michoacan, Oaxaca, Zacatecas and the border states. The plan would put leftist President Andres Manuel López Obrador in good standing with his right-wing counterpart, Donald Trump; generate employment for rural workers in the midst of an economic crisis; and boost remittances to rural areas.

For his part, Trump, forced by a greater need for rural workers in the face of the pandemic and under pressure from agriculture, abandoned his anti-immigrant policy and on Apr. 1 even issued a call for the arrival of Mexican migrant workers.

“We want them to come in,” he said. “They’ve been there for years and years, and I’ve given the commitment to the farmers: They’re going to continue to come.”

U.S. authorities can extend H-2A visas for up to one year and the maximum period of stay is three years. After that, the holder must remain outside U.S. territory for at least three months to qualify for re-entry with the same permit. 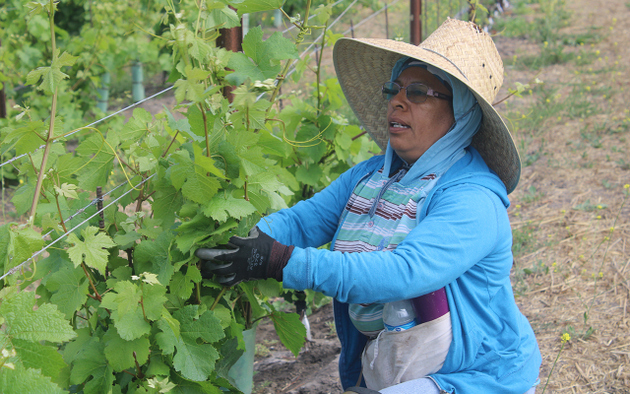 A Mexican migrant worker works at a vineyard in California, one of the U.S. states most dependent on seasonal labour from Mexico in agriculture, and which has now urged President Donald Trump to facilitate the arrival of guest workers from that country so crops are not lost. CREDIT: Kau Sirenio/En el Camino

The most numerous jobs are in fruit harvesting, general agricultural work such as planting and harvesting, and on tobacco plantations, according to the U.S. Department of Labor.

Migrant workers traditionally come from Mexican agricultural and border states and their main destinations are agricultural areas where there is a temporary or permanent shortage of labourers.

Jeremy McLean, policy and advocacy manager for the New York-based non-governmental organisation Justice in Motion, expressed concern about the conditions in which migrants work.

The way the system works, “it’s not going to be easy to follow recommendations for social distancing. Hundreds of thousands of people are going to come and won’t be able to follow these recommendations, and they will put themselves at risk. It could spell another wave of infection and transmission,” he warned IPS.

“This population group has no health services and no medical insurance. If they fall ill in a remote area, what help can they get?” he said from New York.

On Mar. 26, the U.S. Embassy in Mexico reported that it would process without a personal interview the applications of those whose visas had expired in the previous two years or who had not received them in that time, under pressure from U.S. agribusiness.

Trapped with no way out

The migrant workers’ odyssey begins in Mexico, where they are recruited by individual contractors – workers or former workers of a U.S. employer, fellow workers, relatives or friends, in their hometowns – or by private U.S. agencies.

Although article 28 of Mexico’s Federal Labour Law, in force since 1970 and overhauled in 2019, regulates the provision of services by workers hired within Mexico for work abroad, it is not enforced.

It requires that contracts be registered with the labour authorities and that a bond be deposited to guarantee compliance. It also holds the foreign contractor responsible for the costs of transport, repatriation, food for the worker and immigration, as well as the payment of full wages, compensation for occupational hazards and access to adequate housing.

In addition, it states that Mexican workers are entitled to social security benefits for foreigners in the country where they are offering their services.

Although the Mexican government could enforce article 28 of the law in order to safeguard the rights of migrant workers who enter and leave the United States under the visa programme, it has failed to do so.

In its recent report “Ripe for Reform: Abuse of Agricultural Workers in the H-2A Visa Program”, the bi-national CDM organisation reveals that migrant workers experience wage theft, health and safety violations, discrimination, and harassment as part of a human trafficking system.

For Mayela Blanco, a researcher at the non-governmental Centre for Studies in International Cooperation and Public Management, the problem is the lack of monitoring or inspections of recruiters and agencies.

“In Mexico there are still many gaps in the mechanisms for monitoring and inspecting recruitment. There is still fraud,” she told IPS. “How often do they inspect? How do they guarantee that things are working the way they’re supposed to?”

There are 433 registered placement agencies in the country, distributed in different states, according to data from the National Employment Service. For the transfer of labour abroad, there are nine – a small number considering the tens of thousands of visas issued in 2019.

For its part, the U.S. Department of Labor reports 239 licenced recruiters in that nation working for a handful of U.S. companies.

Data obtained by IPS indicates that Mexico’s Ministry of Labour only conducted 91 inspections in nine states from 2009 to 2019 and imposed 12 fines for a total of around 153,000 dollars. Some states with high levels of migrant workers were never visited by inspectors.

Furthermore, the records of the federal labour board do not contain any reports of violations of article 28.

Mexico is a party to the Fee-Charging Employment Agencies Convention 96 of the International Labour Organisation (ILO), which it violates due to non-compliance with the rights of temporary workers.

Peña stressed that there is still a gap between the U.S. and Mexico in labour protection and said workers are being left behind because of that gap.

In response to the pandemic and its risks, 37 organisations called on the U.S. government on Mar. 25 for adequate housing with quarantine facilities, safe transportation, testing for workers before they arrive in the United States, physical distancing on farms and paid treatment for those infected with COVID-19.

Blanco emphasised the lack of justice and reparation mechanisms. “The more visas issued, the greater the need for oversight. Mexico is perceived as a country of return or transit of migrants, but it should be recognised as a place of origin of temporary workers. And that is why it must comply with international labour laws,” she said.

McLean raised the need for a new U.S. law to guarantee the rights of migrant workers, who are essential to the economy, as underscored by the demand reinforced by the impact of COVID-19.

“We pushed for a law to cover all temporary visa programmes so that there would be more information, to avoid fraud and wage theft. But it is very difficult to get a commitment to immigration dialogue in the United States today,” he said.

But the ordeal that migrant workers face will not end with their work in the U.S. fields, because in October they will have to return to their hometowns, which will be even more impoverished due to the consequences of the health crisis, and with COVID-19 in all likelihood still posing a threat.