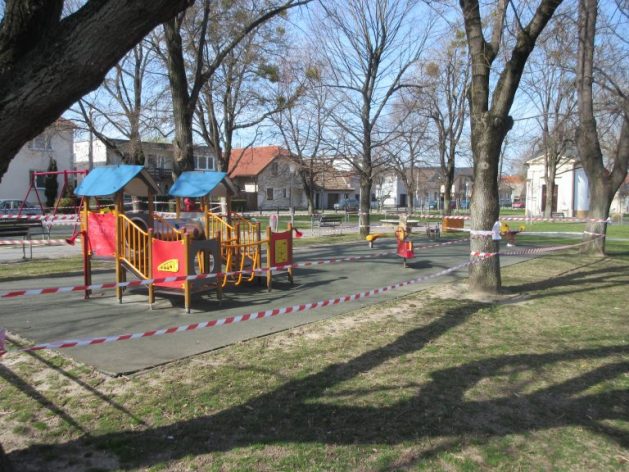 This playground just outside the Slovak capital, Bratislava, was sealed off to stop people spreading the virus. Similar measures were in place in cities and towns across Europe. Credit: Ed Holt/IPS

UNITED NATIONS, Apr 17 2020 (IPS) - United Nations Secretary General António Guterres on Thursday pleaded with global leaders and families to ensure the protection of the world’s children, millions of whom he says are vulnerable to a myriad of threats as a result of the shutdown arising from the global coronavirus pandemic.

While children are at a significantly lower health risk than adults from the coronavirus, the social and economic impacts as a result of both the disease as well as the lockdown can be extremely harmful on children, a new report has revealed.

Guterres made his remarks at the launch of the policy brief “The Impact of COVID-19 on children” that examines the different areas in which children are affected: health, family life, education, lack of access to healthcare, and increased risks as a result of heightened presence online.

The report claims that about 60 percent of all children around the world are currently in a country that is maintaining some level of a lockdown, which is limiting their mobility and/or access to society. Nearly all the grave impacts arise out of children not being able to go to school anymore.

The report states that with 188 countries enforcing a lockdown, more than 1.5 billion children and youth are being impacted in terms of:

Furthermore, children with underlying medical conditions, including those living with HIV, are facing a higher risk of not being able to access their appropriate medicines and care.

Many children around the world who previously had their only meals provided through educational institutions, have now been left  without. The report estimates that more than 368 million children in about 143 countries are being affected by this, and are having to seek their food and nutrition through alternative means.

With heightened stress levels among quarantined families, children could face the brunt and fall victim to family violence, the report warned. They’re also at a risk of witnessing domestic violence, which has been on the rise given many adults are stuck at home with their abusers.

Other advocates working in the field of children’s rights have also raised alarm bells about the issue.
In response to the policy brief released on Thursday, international NGO Save the Children agreed with the Secretary General’s concerns and highlighted different ways in which this abuse is carried out.

“Social disruption and high stress at home can have a deep impact on children, and millions of them now face an increased risk of violence, abuse, neglect, and exploitation,” Janti Soeripto, president and CEO of Save the Children, said in a statement on Thursday.

“Families stricken by poverty often see no alternative to marrying off their daughters or putting their children to work just to survive,” she added.

With children unable to physically attend schools, many are have had to go online for learning, which requires various digital tools. However, disparity in this access means that not everybody can receive the same level of training.

There is also gender disparity as more boys have access to digital technology than girls, which makes it fundamentally more difficult for girls to attain their education this way. The report expressed concern that this might, in the long run, lead to girls dropping out of school, and also would increase the risk of teen pregnancy.

While many children are accessing their lessons and staying connected with friends online, this too can expose them to a different set of risks altogether.

“School closures and strict containment measures mean more and more families are relying on technology and digital solutions to keep children learning, entertained and connected to the outside world,” Dr. Howard Taylor, executive director of the Global Partnership to End Violence, said in a statement on Wednesday, “but not all children have the necessary knowledge, skills and resources to keep themselves safe online.”

The Partnership, in collaboration with the U.N. Children’s Fund (UNICEF) and other rights organisations, released a report detailing the layers of this issue and pointing out ways in which different stakeholders can do their part in ensuring safety of children now that they have an increased presence online.

The report points out that children are more likely to exhibit riskier behaviour online or “outreach to new contacts” at a time when they have limited access for socialising. This means they’re more prone to be at a risk of grooming by online predators, being cyber-bullied, being manipulated into sharing content such as sexually explicit photos which would later be used for extortion methods.

While these are all matters of concern, it’s governments and family members that can play a crucial role in protecting children from these issues.

The UNICEF report recommended that governments must make sure that child protective services be open and accessible; technology companies should make sure their services are built in secure manners that don’t compromise the child users’ data; and parents should be vigilant about keeping antivirus and software updates on their kids’ phones.

The Secretary General further called on social media companies to execute their “special responsibility to protect the vulnerable.”