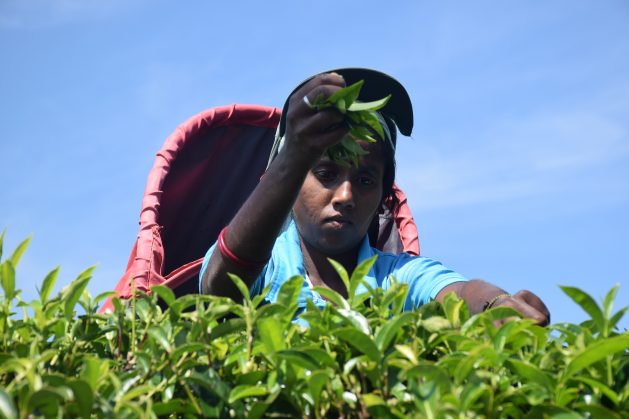 An Indigenous woman worker harvesting the tender leaves in a tea farm in Unakoti district of Tripura State before the coronavirus lockdown. Credit: Stella Paul/IPS

UNAKOTI, India, May 4 2020 (IPS) - As the sun sets over the hills, Prafulla Debbarma, a small tea grower in Dhanbilash village in north eastern India, walks along the labyrinth path of his farm and past a thick blanket of well-grown tea plants. In the fading light, the farmer appears deeply worried. This tea farm, the sole source of his livelihood, remains unharvested thanks to the ongoing COVID-19 crisis.

Across the region, tea harvesting begins on Apr. 1. But as India declared a total lockdown to halt the spread of coronavirus on Mar. 25, farmers in Tripura — the fifth-largest tea producer in India — also had to halt all activities, which included not being allowed to bring in additional labour for harvesting. Two weeks later, on Apr. 12, the government finally allowed harvesting, but by then the tea bushes had grown bigger with new leaves losing their tenderness — a crucial factor in determining the quality of the tea.

According to Debbarma, who is head of the state’s Association of Small Tea Growers — a 4,700-strong community of independent, smallholder tea farmers or growers — everything was fine until the pandemic.

“Our tea was starting to get recognised and markets were just opening for us slowly. The government also was promoting this sector. But the lockdown has destroyed everything because from harvesting to sale, there will be a chain of losses now,” he told IPS.

The supply chain includes plucking the tender tea shoots in spring, drying, processing, packaging and selling, which is done through auctions. Small tea growers, few of whom own a processing facility, sell their entire produce to bigger tea farms in the region.

So being at bottom of the supply chain pyramid, Debbarma explained, means that small growers are also the most vulnerable as they have little say in the sale of the produce or price control. The Rangrung tea estate, in Unakoti, in India’s Tripura state, is owned collectively by a group of small tea farmers. Credit: Stella Paul/IPS

A few kilometres away from Debbarma’s farm is Rangrung, a tea estate owned collectively by a group of small tea farmers. Many of these farmers also work as day labourers on other plantations as their own farms are too small to provide a livelihood.

Dulal Urang, one of Rangrung’s smallholder farmers who also works as a day labourer, is worried that the economic effects of the COVID crisis may push sector back to an era of uncertainty similar to the one almost two decades ago.

However, over the past few years, the tea sector had begun thriving again.

According to the United Nations, tea plays a meaningful role in rural development, poverty reduction and food security in developing countries.

But in India, tea estates have been historically known as pockets of poor nutrition, ill health and under nourishment, mostly because of low wages and poverty. In Tripura, an overwhelming majority of the workers here earn between $26 to $66 per month, a Tripura University study found. It noted, “the present wage rate is Rs.71 ($0.94) per day, it may be increased up to Rs.150 ($1.98) per day or more”.

The set government wage in Tripura is actually 176 rupees or $2.33 a day for an adult and 88 rupees or $1.66 a day for a non-adult. A UNICEF-backed study also notes that a significant number of tea estates across the country also employ child labour.

However, farms that have better market access and higher selling prices had been slowly changing for the better.

Debbarma, who started his own processing unit recently, employs some 29 people and sells most of his produce to Hindustan Lever — Unilever’s India arm.

“The price was good, and the procurement process is transparent. If we produce more, we can pay more to [our workers] and change our entire community,” said the farmer.

Kanchan Uriya a member of the Rangrung village council noted that where estates paid the government daily wage, life had been better for tea pickers.

“Wherever the right wages are paid, the living condition has improved. You can see in tea estates like Manu Valley where workers have regular food supplies, mobile phones etc. But some [tea estates] are still not paying it,” she told IPS.

But some of the smallholder tea farmers, who also worked as day labourers, had been contributing by producing high quality organic tea, said Bijit Basumatary, head of the Organic Small Tea Growers Association of North East (OSTGANE).

In international markets, the difference between the price of organic and non-organic tea is huge: while a kg of the best quality of non-organic tea sells for about $5, organic tea can be sold for at least at $105 per kg.

Though to sell organic tea, a tea planter needs to acquire a certificate from an authorised agency and recommendation of the Tea Board of India (TBI) — the nodal government agency on tea trade. It’s a complex process, involving a variety of tests on the variety, quality and yield rates, among others.

With limited resources and without the backing of big business houses, small tea growers found it hard to get the organic tag.

Yet, two smallholder tea farms in Tripura, Maheshkhola and Mohanpur, had received the coveted organic certification after they met the National Programme for Organic Production Standards.

And other like Debbarma had been lobbying the government for support in getting the certification, while proactively learning organic farming techniques.

Debbarma, who is also the vice chair of OSTGANE, organised one such training at his own tea farm prior to the coronavirus lockdown.

Combating the effects of climate change

The growers were also planning a shift to natural gas from coal — a move supported by India’s premier fossil fuel explorer Oil and Natural Gas Commission (ONGC), Om Prakash Singh, a senior ONGC official had said during a press conference in January.

If implement quickly, this could be a small but significant step towards easing the burden of the troubled industry, which has been hit by climate change.

Combined with organic farming, the shift to an alternative, clean energy supply would help the small tea growers in Tripura restore plant and soil health, increase yield and better combat the climate threat in the future. Coronavirus may have reversed the progress

But amid the COVID-19 lockdown, this continued improvement of conditions seems impossible now, Uriya said. Especially as most tea farms follow a ‘no work, no pay’ policy.

The lockdown, which was meant to end today, May 4, has been extended for a further two weeks.

According to Debbarma, the combination of a delayed harvest, coupled with a low market price is almost certain to cause financial damage and losses too heavy to recover.

Uriya is afraid that this will result is much lower wages for tea pickers.

“If they didn’t pay the right wages when business was good, how will they pay when there is little or no business?” she said.

In the meantime, small tea farmers, like Urang, want to ensure their harvests are wasted and that they can continue earning a living.

“Right now, I am only hoping that my harvest is sold and there will be enough work after this season. Otherwise, our survival will be difficult, especially when the rains come,” Urang told IPS.