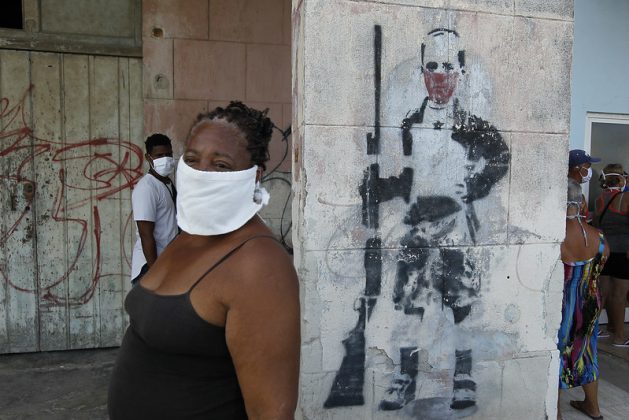 A woman wearing a mask to protect herself from the contagion of the coronavirus, waits to buy food outside a store in the Playa municipality, in Havana, Cuba. As of Tuesday, Jun. 16, 1.7 million people have been affected by the virus across Latin America and the Caribbean -- doubling in the last week. Credit: Jorge Luis Baños / IPS

UNITED NATIONS, Jun 18 2020 (IPS) - The multi-dimensional impacts of the coronavirus pandemic in Latin America could lead to a “hunger pandemic” if not addressed with urgency.

Norha Restrepo, communications officer at the World Food Programme’s (WFP) Latin America office, shared this concern with IPS following a briefing by the United Nations agency on Tuesday about COVID-19’s impact on the region. As of Tuesday, Jun. 16, 1.7 million people have been affected by the virus across Latin America and the Caribbean — doubling in the last week.

Miguel Barreto, WFP’s Regional Director for Latin America and the Caribbean, raised concerns about the region’s massive informal labour sector, which have been especially hard-hit by lockdowns, as well as the grave effects of other compounding factors such as food insecurity and climate change.

“Our region already had problems related to economic and climate shocks, as well as insecurity and displacement,” he said at the briefing, adding that between 50 and 70 percent of workers in the region earn their income through jobs in the informal sector, which makes them more vulnerable and facing food insecurity under lockdown.

“Now, with COVID-19 restrictions in place to save lives, millions have lost all or part of their income. Many do not know where their next meal is coming from,” he said.

“In an extraordinary situation like this one, every other aspect of society will definitely be impacted,” she said. “But for the most vulnerable, the people who really depend on the society and the economy moving, the impact on hunger was immediately seen — and this can really get worse. So we definitely have to do much more to avoid this from becoming a hunger pandemic as well.”

Experts all pointed out that Latin America and the Caribbean have recently become the hotspot for the virus because it’s a region that was already facing its share of struggles.

“Latin American countries became hot spots because measures of prevention and control are much less effective than in industrialised countries,” Dr. Cesar Chelala, a global health consultant who has in the past voiced concerns about the public health issues in the region, told IPS.

In a March 2019 report, Chelala detailed how issues such as “sprawling urbanisation, environmental problems, and increasing levels of obesity that affect all age” as well as prevalence of non-communicable diseases were a massive concern in the region.

With the virus being especially quick to spread in crowded areas, and affecting people with underlying conditions, the prevalence of Chelala’s highlighted factors are worrisome.

“Any serious underlying condition lowers a person’s immunity and, as a result, the impact is much bigger. That is why not only very sick people but also older people are more prone to getting the most serious forms of the infection,” he told IPS.

Beyond the concerns of the direct impact of the virus, there are also concerns of secondary impacts — such as the consequences of the lockdown and food insecurity.

With such a large part of the workforce being out of job during lockdown, the poor are only getting poorer, and having trouble accessing food — whether because of financial troubles or their inability to physically go to a store, said Restrepo of WFP.

As a result, issues such as food insecurity have heightened, according to Restrepo, who added that with COVID-19, there has been an increase in people living with severe food insecurity — from 700,000 to 1.6 million people.

Furthermore, she added, the migrant crisis is also affecting the situation. She said more than five million Venezuelan migrants are in the region, and are extremely vulnerable as they’re not part of any social protection system because they are not citizens.

These migrants also maintain informal jobs, and thus, for them it’s “extraordinarily complicated to cope,” she added.

Meanwhile, other concerns about the individual economies in the region remain.

Dr. David Alexander Walcott, Founder of NovaMed and a doctor in Jamaica, told IPS that given tourism is crucial for Jamaica’s economy, the lockdown means people are having to make difficult choices between earning a livelihood and remaining alive.

Potential solutions would require the collaboration of every actor, said Restrepo.

In addition to that, Chelala pointed out the role the education sector can play in providing appropriate messages to the students and the general population. “Accessible water and sanitation, and the hygiene measures involved, are important to control the spread of the disease,” he added.

Restrepo suggested that the countries would benefit from soft credit to governments by  international financial institutions. This way, she said, “governments can invest the money into protecting and supporting the most vulnerable people.”

She also suggested social protection which can help people stay at home so those working in the informal work sector don’t have to go out or have to choose between death and an income.

She added: “Because the pandemic is such an enormous magnitude, it means everybody has to be involved — from the individuals to really enormous institutions with a lot of capital.”