A recent diplomatic spat between Zimbabwe and the U.S. began after a senior U.S. official accused Zimbabwe of fomenting unrests across America in the wake of the killing of the unarmed African American, George Floyd. 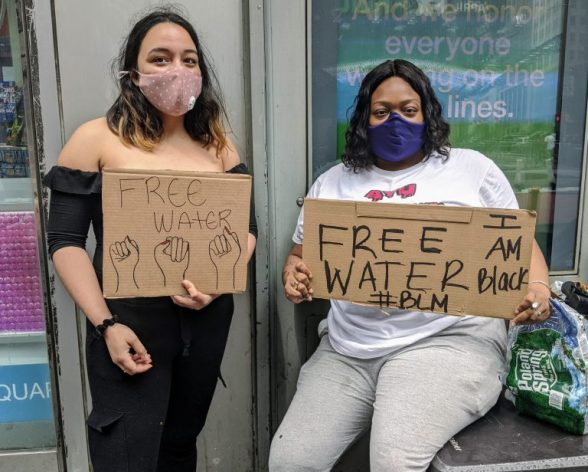 Zekiya Louis (R) and Manuela Ramirez (L) handing out free water to protesters in Times Square, New York during a protest over the death of George Floyd. Credit: James Reinl/IPS

BULAWAYO, ZImbabwe, Jun 8 2020 (IPS) - “As tall as he is, if he continues to do that I will kick him out of the country,” thundered Zimbabwe’s former President Robert Mugabe in 2008, his anger aimed at the then United States ambassador James McGee after the diplomat questioned the results of Zimbabwe’s 2008 general elections.

It was not the first time the late president had threatened a U.S. diplomat. In 2005, Mugabe had threatened to throw out then U.S. ambassador to Zimbabwe, Christopher Dell, telling him “he could go to hell” after Washington’s top man in Harare had criticised the Mugabe administration.

But now, with a new president and administration at the helm, it appears as if the long-running frosty relations between the countries continues.

The recent diplomatic spat between Zimbabwe and the U.S. began after a senior U.S. official accused the southern African country of fomenting unrests across America in the wake of the killing of an unarmed African American man, George Floyd, on May 25.

While the current administration under President Emmerson Mnangagwa has shied away from Mugabe’s bellicose tone, the country’s foreign affairs minister Sibusiso Moyo said in a statement released after his meeting with Nichols that comments made by O’Brien were “false and deeply damaging to deeply damaging to a relationship already complicated due to years of prescriptive megaphone diplomacy and punitive economic sanctions”.

Moyo added that Zimbabwe had taken note of “the measures deployed by the U.S. authorities to deal with the challenges currently confronting them. At the same time, we recall the harsh U.S. criticism and condemnation of our own response to multiple instances of illegal, violent civil unrest”.

These comments also came days after the U.S. and the European Union had released a joint statement criticising a spate of human rights violations in Zimbabwe where members of the police and the military were accused of assaulting and kidnapping citizens.

However, analysts note that the frosty diplomatic relations between the two countries have come a long way, and it will take time to restore mutual trust and respect.

“Even in the Obama Administration, Zimbabwe was an ‘easy hit’. There were far more authoritarian regimes than Robert Mugabe’s but, with the ending of Apartheid, Zimbabwe in its land nationalisations presented itself as a ‘black/white’ issue, an Apartheid in reverse. So it became an easy country to criticise because what were complex issues could be presented so starkly and simply,” Stephen Chan, Professor of World Politics at the University of London’s School of Oriental and African Studies, told IPS.

“Two of America’s recent ambassadors, Johnnie Carson and, currently, Brian Nichols, are black – so there are presentational issues in being too critical. In Zambia, the ‘offending’ U.S. Ambassador who was white was recalled at the demand of the Zambian Government,” Chan told IPS by email.

Despite these concerns and ongoing rift with the U.S. and EU, the Zimbabwean government  has turned to public relations lobbyists to reboot its battered imagine.

“The Zimbabwe regime is propped up by human rights abuses, by repression, by silencing the masses, this is why they continue with abuses while hoping that propaganda and public relations will clean their soiled image internationally,” Dewa Mavhinga, Human Rights Watch’s southern Africa director, told IPS.

“As a result, the Zimbabwe government spends huge amounts paying PR companies in Washington DC in the hope that those companies will help with image issues, but the truth is simply that the Zimbabwe government must stop abuses and start respecting human rights. No-one in the international community will respect a country that allows abductions, torture and rampant rape of women,” Dewa told IPS.

Government spokesperson Nick Mangwana would later tell local media that Zimbabwe was not seeking to be enemies with the U.S., something Chan, the international politics professor, said Zimbabwe cannot afford.

“Zimbabwe desperately needs to retain as good a set of relations as possible with the U.S. as part of the West. The country is basically bankrupt. It almost begs for help. Even in moments of argument, it cannot afford to alienate a country like the U.S.,” Chan said.

While Zimbabwe has in the past threatened to expel “meddlesome” U.S. ambassadors, the current government has resisted the temptation.

“Removing an ambassador would be a major diplomatic step. If the Zimbabwean government were to remove him (ambassador Nichols), the U.S. would likely react by suspending, temporarily at least, Zimbabwean diplomats in the U.S. or reduce its diplomatic presence in Zimbabwean until the government made some meaningful progress on political and economic reforms,” Nathan Hayes, an analyst with the United Kingdom-based Economist Intelligence Unit, told IPS.

“Ultimately, it would not be a game Zimbabwe would win,” he said.

After he was summoned by Zimbabwe’s foreign affairs minister, U.S. ambassador Nichols issued his own statement, looking beyond the ongoing row which served as a reminder of the U.S. continuing humanitarian support of Zimbabwe.

“The American people’s unwavering commitment to the welfare of Zimbabwe’s people has kept us the largest assistance donor,” Nichols said.

In January this year, the U.S. reported that it had provided $318 million to Zimbabwe in 2019, adding “notwithstanding ongoing anti-democratic and repressive practices by the Government of Zimbabwe which continue to affect the bilateral relationship, the United States remains the ‎largest provider of health and humanitarian assistance”.

According to the U.S. Agency for International Aid (USAID), the U.S. has provided “more than $3.2 billion in development assistance to Zimbabwe since its independence in 1980”.

“Zimbabwe must be careful about biting the hand that feeds it,” Piers Pigou, Crisis Group’s Senior Consultant for Southern Africa, told IPS.

“The colourful posturing and allegations from the government that are levelled at successive U.S. Ambassadors, invariably reflect a clumsy ideological posturing that seeks to avoid an empirically rooted engagement on the substantive issues of contestation,” Pigou told IPS.

“Zimbabwe’s credibility as a commentator and protector of human rights will only develop once it puts in place, develops and invests in the institutional capacity, competencies and independence of its democracy supporting institutions and builds an identifiable culture of accountability,” he said.

As anger against the U.S. swelled across the globe in condemnation of Floyd’s death, in Zimbabwe ruling Zanu PF supporters had planned to hold a demonstration on Jun. 4 outside the U.S. embassy in Harare in what could have done nothing to promote entente between the two countries.

“The U.S. and Zimbabwe have open antagonism. There is a clash of pretentious political ideologies,” William Mpofu, a political analyst and researcher at the University of the Witwatersrand in South Africa, told IPS.

“Under Mugabe the ideology was pretentious pan-Africanist radicalism. The U.S. has pretended to democracy and liberalism. These two rhetorics have a natural antagonism but they are both fake and fundamentalist. The U.S. can do without Zimbabwe. Zimbabwe cannot survive without U.S.,” Mpofu said.

With coronavirus lockdown restrictions that have seen countrywide state sanctioned human rights abuses in Zimbabwe in place indefinitely, and with general elections coming in 2023, elections historically marred by state sponsored repression, analysts are watching whether this will further sour relations between the two countries.