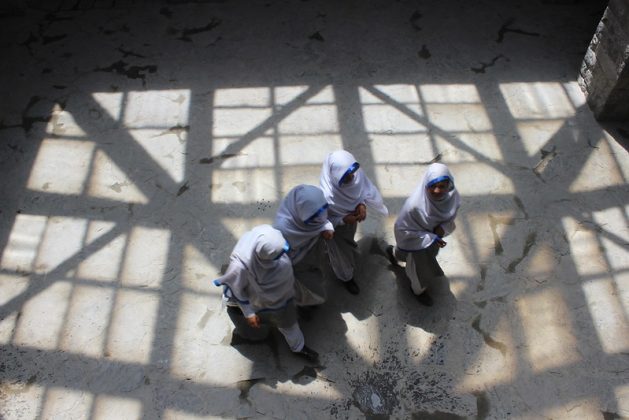 Millions of school-aged children in Pakistan drop out before completing primary education. The COVID-19 pandemic has magnified the already-existing inequities for women and girls. A recent study from the Malala Fund estimates that an additional 2o million secondary school girls might never return to school after the crisis has passed.Credit: Zofeen Ebrahim/IPS

UNITED NATIONS, Jul 21 2020 (IPS) - Catherine Bertini, former executive director of the World Food Programme, began the IPS United Nations Bureau webinar “The Impact of the COVID-19 Pandemic on Women and Girls” by reminiscing on a talk she gave in 1995 entitled “Women eat last”. She remarked that after 25 years, the phrase is still something that is relevant to the present day.

“So often in societies, it is the women who prepare the food, gather the food, grow the food and find it somewhere. Even if their families are desperately poor [they] are the ones who prepare it and serve it. And they serve it first to their husbands and boys. So some things take much longer to change than we can possibly change them,” Bertini said.

The webinar, which took place on Jul. 14, had six guest speakers, including moderator Doaa Abdel-Motaal, the advisor of the Guarini Institute for Public Affairs in Rome, Italy.

The speakers all touched upon how the pandemic will affect women’s and girls’ access to food and education and the effect it is having on their mental health, particularly in developing countries and countries of conflict and refuge.

According to Bertini, at the end of 2019 there were an estimated 80 million people in need of food and who could die if not aided.

WFP has stated that millions more have been forced closer to starvation and if no action is taken many will die as “an unprecedented 138 million people who face desperate levels of hunger as the pandemic tightens its grip on some of the most fragile countries on earth”. WFP has appealed for $5 billion in aid.

Bertini said that there are external factors that contribute to less access to food, especially during the pandemic.

“These issues come because of the physical access, economic access, transport issues, production issues and other issues related to the effects of the crisis of COVID-19. This is in addition to the other issues that the poor have to deal with in so many places,” Bertini said.

The majority of the food WFP provides is distributed through women and girls, Bertini explained, because they will most likely be the ones preparing food in households.

“With COVID-19, all of the issues that have been problematic for women and girls throughout the world and throughout time have become worse,” Bertini said.

The COVID-19 pandemic has magnified the already-existing inequities for women and girls, as caretakers, professionals and as citizens of the world. According to Yasmine Sherif, director of Education Cannot Wait, a recent study from the Malala Fund estimates that an additional 2o million secondary school girls might never return to school after the crisis has passed. This may be due to internal conflicts within the countries, natural disasters, economic strife or even forced displacement.

“In countries of conflict or refuge, education is both there to help and empower the girls and adolescent girls and it is also a protection method. It keeps them away from having early child marriages and having children when they are children themselves. It also keeps them in a protective environment from getting involved in trafficking and gender based violence that can come as a result of conflict and during crisis, especially during the COVID-19 pandemic,” Sherif said.

Sherif said that if these young girls do not return to school, they will be affected by extreme poverty because of conflict and the consequences that come with being in a place of refuge or immense violence.

Sherif said these factors were related to the issue of food access that Bertini raised, adding that young girls and adolescents are the group most affected.

Sherif used South Sudan as an example of a country that has recently found freedom but where, prior to the COVID-19 pandemic, 72 percent of primary school aged girls did not attend school.

“We are really speaking about an education crisis that was there well before we had a health crisis. If we do not invest in education, especially girls education, we are going to leave behind 50 percent of the world’s population gravely affected by conflicts and disasters. And that can only perpetrate the vicious cycle of crisis, conflict, hunger and poverty. Unless we invest in girls and women, we cannot speak about sustainable development and we cannot speak about recovery from COVID-19,” Sherif said.

Susan Papp, managing director of Policy and Advocacy at Women Deliver, a global advocacy organisation that champions gender equality and the health and rights of girls and women, told IPS that the COVID-19 crisis is demonstrating that “if we want to deliver health, well-being, and dignity for all, governments and decision-makers must apply a gender lens to response and recovery efforts. Policies that do not apply a gender lens will fall short for everyone”.

“Decision-makers across sectors must commit to rebuilding a stronger and more equal society for everyone including girls and women. This starts with governments collecting data disaggregated by age, gender, race, and other factors to better understand the needs of girls and women and ensure they respond to those needs effectively,” she said.

Along with the collection of data, Papp said that a key part of applying a gender lens to COVID-19 is to institute a gender marker to tag investments and programming that incorporate gender considerations.”

In the absence of gender sensitive, gender responsive measures to ongoing global crisis women and girls will emerge from the pandemic even further behind than they were pre-COVID-19.