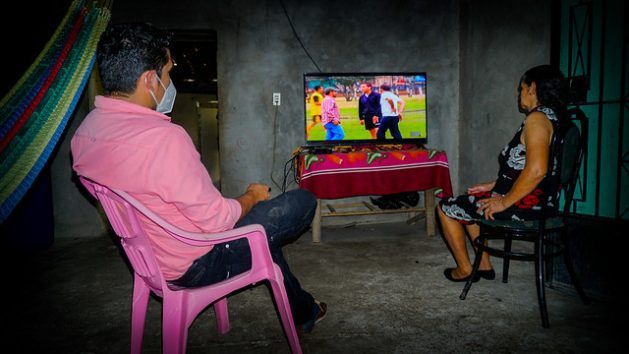 Benilda Membreño and her son Jaime Márquez enjoy a television programme, a luxury before 2006, when the village of Potrerillos in the eastern Salvadoran department of San Miguel lacked electricity. With the technical and financial support of national and international organisations, the inhabitants of Potrerillos were able to install a mini community hydroelectric plant. CREDIT: Edgardo Ayala/IPS

CAROLINA, El Salvador, Sep 30 2020 (IPS) - Ermelinda Lobos’s life has improved substantially since she and the rest of the people in her small village, hidden in the mountains of northeastern El Salvador, worked hard to build a mini hydroelectric plant and become self-sufficient in energy.

Now the seamstress sews on an electric machine and has light bulbs instead of the kerosene lamps she used before 2006, when there was no electric power in the village of Potrerillos in rural Carolina, a municipality of some 6,000 inhabitants in the department of San Miguel.

“I used to sew with a pedal machine, and I used a kerosene lamp for light and ironed with a charcoal iron that burned my hands. Now I sew with an electric machine in the light provided by light bulbs,” Ermelinda proudly told IPS.

The mini power plant, with a capacity of 34 kilowatts (kW), harnesses the waters of the Carolina River to move a turbine that activates a generator to produce enough electricity for 40 beneficiary families, not only in Potrerillos, but also in another nearby community: Los Lobos, in the neighbouring municipality of San Antonio del Mosco.

The work in Potrerillos started in 2005, with the assistance of the Basic Sanitation, Health Education and Alternative Energies (Sabes) association, which has promoted similar projects in the country, such as the El Calambre mini-plant in the hamlet of Joya de Talchiga, in the municipality of Perquín, also in the northeast.

The funds for the project in Potrerillos were provided by the government of the Spanish region of Navarra, and funds for the electromechanical equipment also came from the Energy and Environment Alliance with Central America, which promotes sustainable development in the area with funding from European countries.

“I am very proud of our little hydropower plant,” added Ermelinda, as she finished sewing a blouse, because “without it I would still be using the old machine moved by my feet, in the light of kerosene lamps.”

Local residents explained to IPS during a visit to the hamlet that they provided the labour for the toughest tasks, when the work began in 2005. About 100 people live here, distributed in 21 families.

Bringing construction materials to the dam site and digging in the riverbed to divert the course of the river so the foundations could be laid, among other tasks, were part of the daily activities of the community as the project took shape. 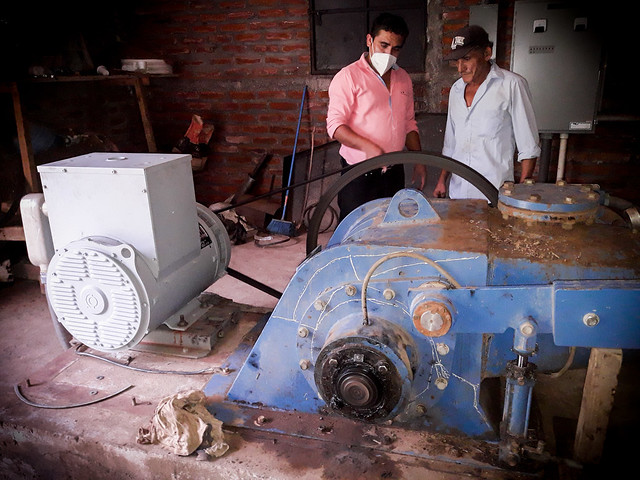 Neftalí Membreño (R), in charge of the machine room, checks the turbine and generator of the mini hydroelectric plant in the village of Potrerillos, Carolina municipality in the eastern Salvadoran department of San Miguel. This small rural community made up of 21 families built a small dam in 2006 that supplies them with electricity at a low cost. CREDIT: Edgardo Ayala/IPS

“We had to carry stones, dig, mix the cement and many other things,” Benilda Membreño, one of the people who was most excited when she heard about the possibility of building a community mini hydropower plant in Potrerillos in 2005, told IPS.

Benilda even took on the task of convincing doubters that they could build a small hydroelectric dam driven by the waters of the Carolina River, and obtain good quality electricity.

“When the construction work started and the cables were installed, there were still skeptical people who did not think such a small river could generate electricity. I on the contrary was involved throughout the entire process. It was hard to work in the water, you should have seen how hard it was,” added Benilda, while feeding deer in a corral on her small farm.

Besides the deer, she has cows, pigs and chickens, which provide food and income for her family.

Subsistence agriculture, and to a lesser extent small-scale livestock farming, are the main economic activities in Potrerillos, as they are in almost all of the countryside in this Central American nation of 6.8 million people.

Each family that took part in the work earned the right to receive electricity in their home when the plant finally began producing power in 2006.

“The day we got electric power I even cried, I was so excited,” Benilda recalled.

According to official data, 99 percent of households in urban areas of El Salvador have electricity, but the proportion drops to 95.2 percent in rural areas, where two percent still use candles or kerosene lamps for lighting. 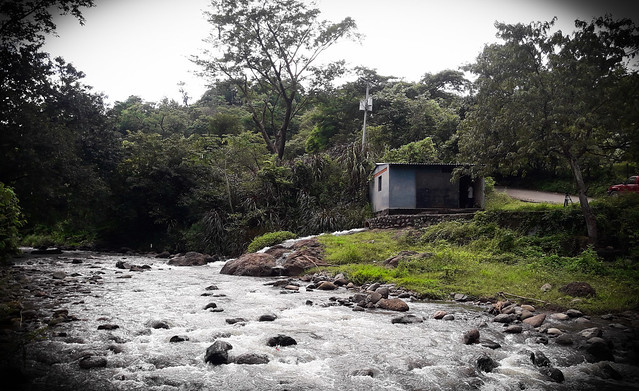 View of a segment of the Carolina River, whose waters move the turbine that activates the generator which provides electricity to the people of the villages of Potrerillos and Los Lobos, located in the mountains of northeastern El Salvador. In the background can be seen the mini-plant’s powerhouse. CREDIT: Edgardo Ayala/IPS

The mini-hydroelectric plant is composed of a low concrete dike that contains part of the river water, which is transported through a channel to a loading chamber several meters below, running from there down to the turbine in the powerhouse.

Unlike mega-hydroelectric projects, which usually completely dam the river flow, the mini power plant in Potrerillos is designed so that the water diverted to move the turbine returns to the river, thus ensuring sustainable usage.

In addition to having good lighting at night and being able to watch television, among other amenities, small enterprises have also emerged in the village that generate new income for some families, thanks to the electric power.

Besides working as a seamstress, Ermelinda has a shop whose main attraction is cold drinks from a refrigerator, while in Benilda’s house a small welding workshop operates.

“There is a man from another community who is a carpenter, and he comes here to use his power tools. That means the voltage we have is good, strong enough to run electrical appliances, even welding machines,” said Jaime Márquez, who was visiting his mother, Ermelinda, but lives in the town of Carolina.

Another advantage of receiving energy from a community project, rather than a private company, is the cost of the electricity.

Jaime said that in Carolina he pays more than 20 dollars a month for electric power and knows people who spend up to 35 dollars, while in Potrerillos the monthly bill is no more than five dollars.

In the midst of the coronavirus pandemic, the generator broke down and the villagers returned to a life without electricity, listening to the nightly news on small battery-powered radios to the dim light of candles.

“There was a little noise in the generator, the bearings inside had moved, and I said, ‘something’s wrong here’. A mechanic opened it and said yes, it was the bearings,” said Neftalí Membreño (no relation to Benilda), who is in charge of the powerhouse. 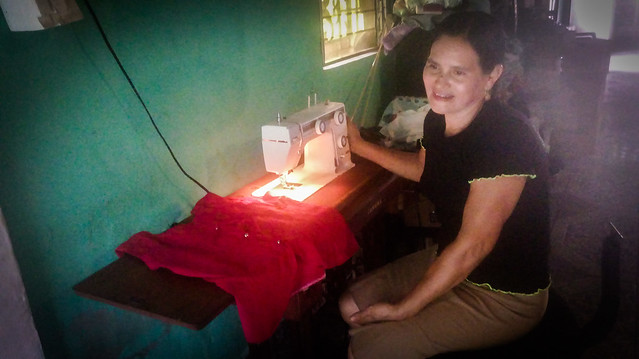 Ermelinda Lobos sits at her electric sewing machine, one of the benefits brought by the energy produced by the mini hydroelectric plant built in her community in northeast El Salvador. Before her village had electricity, the seamstress did her sewing on a pedal-operated machine in the light of kerosene lamps, and used an iron heated with charcoal. CREDIT: Edgardo Ayala/IPS

The decision was made not to repair the generator but to buy a completely new one, from the United States. However, due to the health emergency caused by the COVID-19 pandemic everything was delayed and the community spent two months without electricity, a setback that was difficult for the families, even though they knew it was temporary.

In addition, the breakdown caused an increase in expenses for the families, because each household had to buy candles and kerosene for the lanterns, while sending their cell phones to Carolina for recharging.

“Those two months without electricity I spent an extra 30 dollars,” Benilda said. “I don’t like to watch soap operas, but I do like to use Facebook on my phone.”

Finally, after the long wait, the new generator arrived in September, shortly before IPS’ visit. The total cost, including transportation and customs, was 3,217 dollars, which the families of Potrerillo had already collected as a community, before the Carolina mayor’s office decided to contribute the funds.

“Today it is ready and in perfect shape to continue working,” said Neftalí, after showing IPS the turbine and generator and confirming that everything was working well after the installation.

In those two months, employees of the private company that distributes energy in eastern El Salvador, the Empresa Eléctrica de Oriente (EEO), visited the small hamlet to try to convince the local residents to abandon the community energy effort and become its customers, the villagers told IPS.

The company is the local subsidiary of the U.S. transnational consortium AES, active in 14 countries, with more than 300,000 customers in the east of El Salvador. The group also has three other subsidiaries that provide electric power in other regions of the country.

The distribution and sale of electricity was privatised in the country in the late 1990s.

“They came to offer us electric power service, but I don’t want to reach an arrangement with the company. I prefer our mini-plant because the benefits are great,” said Ermelinda, who pointed to the low cost of energy offered by the small plant, while she took soft drinks out of the refrigerator and sold them to a couple of customers.

“Besides, it’s not the same thing to pay an international company as to pay less money for a community effort that has cost us all here, which is the fruit of our efforts,” she said with conviction.