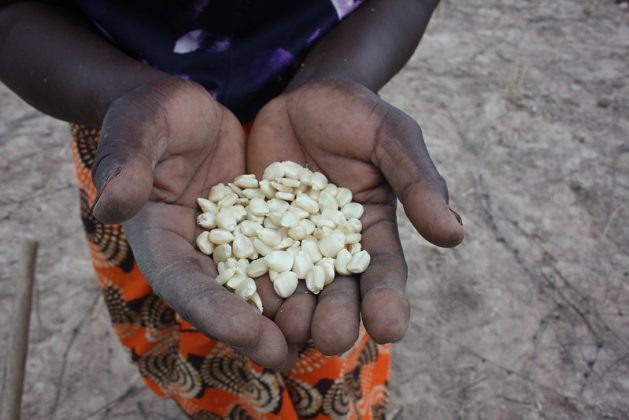 Food systems are at threat, owing to climate change “massively interfering” with food systems around the world, leading to droughts, floods and fires. Credit: Busani Bafana/IPS

“Food is more than what satisfies our hunger, it’s more than what nourishes our bodies and brains,” Kalibata, former Minister of Agriculture and Animal Resources in Rwanda, said in a passionate speech in February. “Food is…economics, politics.”

In an interview with U.N. News last week, Kalibata said being born in a refugee camp in Uganda shaped her view on food sustainability in many ways. Her family was provided land by the U.N. High Commission for Refugees, which they used to start a small farm. It opened her eyes to the different ways the agricultural sector has the potential to “provide huge opportunities for smallholder communities”.

But systems are at threat, owing to climate change “massively interfering” with food systems around the world, leading to droughts, floods and fires, she said in her February speech.

“Today’s food systems do not respond to what we need as people,” she added in her interview with U.N. News. “The cause of death for one in three people around the world is related to what they eat.”

Kalibata has ambitious plans for the Food Systems Summit. She said there’s a U.N. Task Force dedicated to the summit that will be guiding existing research “so that nothing falls through the cracks”, and it will be collaborating with experts examining scientific data from around the world.

However, her leadership has been met with resistance from some watchdogs. Since 2014, Kalibata has been president of the Alliance for a Green Revolution in Africa (AGRA), a Gates Foundation project that aims to address food insecurity as a means to address poverty across Africa.

Since Kalibata’s leadership of the 2021 Food Systems Summit was announced in February, a petition has been circulating to revoke her status as the special envoy.

“Given the history of AGRA, the appointment of its President to lead, prepare, and design the Summit, will result in another forum that advances the interests of agribusiness at the expense of farmers and our planet,” read part of the petition.

It claims that AGRA’s core interest remains in satiating corporate interest, and funnelling public resources in that direction.

“Their finance-intensive and high input agricultural model is not sustainable beyond constant subsidy, which is drawn from increasingly scarce public resources,” read the petition, adding that there is a large imbalance in the power dynamics between the farmers and multinational grain traders, among others, who profit off the operation, while farmers “remain trapped in cycles of poverty and debt.”

It remains to be seen how it will affect her leadership, given climate change and sustainability efforts are increasingly distancing themselves from big corporates and those aligning with them.

Meanwhile, Yemen, which has been ravished by a famine for almost five years, is once again in critical need as torrential rains and floods have created an urgent need for food and safety measures.

The spokesperson for the U.N. Secretary General announced that the U.N. and their partners have distributed emergency food supplies among other resources. Yemen remains one of the most food insecure countries in the world, ranking 111 out of the lowest ranking of 113.

For the upcoming Food Systems Summit, it would also be crucial to keep an eye on how it will address the country’s famine and food insecure concerns.