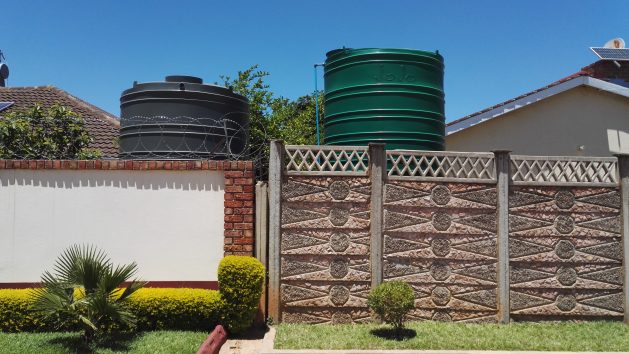 Water tanks installed in homes in a Bulawayo suburb. The city has been facing a decades long water crisis. Credit: Ignatius Banda/IPS

BULAWAYO, Zimbabwe, Oct 21 2020 (IPS) - Dotted across the Zimbabwean city of Bulawayo, the water tanks installed in private residences is evidence that years of a water crisis, that has seen some suburbs here going for months without running water, has not spared anyone. The large plastic drums, locally called Jojo tanks after the company that manufacturers them, and which have a storage range of up to 10,000 litres, have assumed a class status of sorts in Bulawayo.

Desperate residents, like Philemon Hadebe, who can afford to have responded to the water crises by installing the giant tanks in their residences.

Such tanks are traditionally used to harvest rain water and also store groundwater, but in COVID—19’s new normal, everything has been upended.

“This is about survival,” Hadebe told IPS.

“You cannot go for weeks without water in a house where you have kids that’s why I bought this thing,” he said pointing to the 2,500 litre water tank in his yard.

“I let the water run whenever it is made available (in the taps) and it has helped a lot to stock up for when the taps run dry for days and even weeks,” he said.

Is he is not concerned about the water bill?

“You have no time to worry about the water bill. These are desperate times,” Hadebe said. It’s despite the fact that the local municipality has lamented the failure of residents to settle their bills, which the council says has crippled service delivery.

Those residents who cannot afford bulk storage use any container available, including 2-litre plastic containers. But when these  run out, they turn to unprotected water sources, a practice city health officials say has resulted in a spike of waterborne diseases such as typhoid and dysentery.

The local authority blames water shortages on a range of factors that include low levels in supply dams, breakdown of infrastructure installed before the country’s independence in 1980 and also constant power outages said to cripple pumping water from dams.

“Bulawayo has always faced a perennial water problem which has been met with a tepid preparedness by council. Every year the city is plunged into a crisis. The last such crisis was in 2007 but the current one has been the worst ever,” Ndlovu told IPS.

While some residents are installing water tanks, this comes at a steep cost.

Business has been brisk for the manufacturers, but this has come at a huge cost for the city’s efforts to save the little water left in supply dams.

Early this month, the city’s town clerk Christopher Dube highlighted the extent of the water crisis, telling local media that the city had run out ideas.

“We no longer have water in the city while consumption has increased. Residents have also resorted to buying Jojo tanks (bulk water containers) and whenever we shut supplies we do so because our reservoirs would have run dry,” Dube said.

The municipality says stocking water by residents has led to a citywide increase of water consumption, and fines imposed on excessive water used have not deterred residents such as Hadebe.

Other residents have resorted to sinking boreholes in their homes, and selling the water. But concerns have previously been raised by municipality about the haphazard and unregulated groundwater.

As part of long-term efforts to address the water crisis, and which might render domestic bowsers redundant, the African Development Bank (AfDB) is supporting the city with a $33 million grant under the Bulawayo Water and Sewerage Services Improvement Project (BWSSIP).

According to the AfDB, the grant will “rehabilitate and upgrade water production treatment facilities, water distribution, sewer drainage networks and wastewater treatment disposal facilities in the southwestern part of the city”.

City mayor Solomon Mguni told IPS he could not discuss the issue, but in a council report last month he blamed the crisis on “vandalism of infrastructure and power outages which interrupt pumping”.

For now, residents with the financial clout are creating their own domestic solutions albeit at a cost for the long term sustainability of already strained water sources.

Pressure groups however insist the city could have done better.

“Despite the fact that water account is a the cash cow for the Bulawayo City Council, there is less investment in water resources,” Ndlovu said.

Meanwhile, the country’s meteorological services department has forecast above normal rains this season, which could provide not only relief to the parched city, but could also be bad news to Jojo tank retailers.