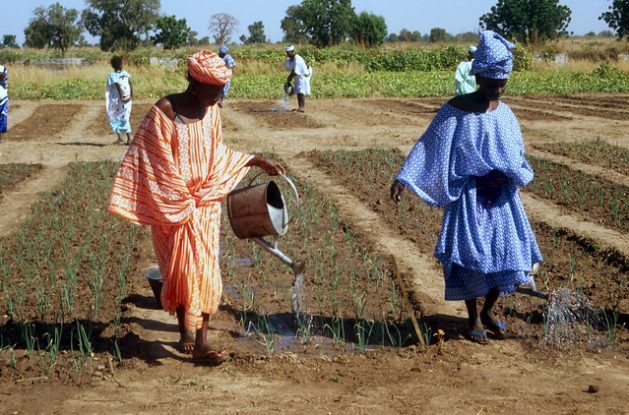 Women farmers irrigate crops of onions and other vegetables. They participate in a special programme to improve Senegal's food security. Credit: FAO

ROME, Oct 21 2020 (IPS) - The month of October 2020 will be recalled as one of the most important moments in raising awareness about world food security, whether in the global debate or in the search for possible concrete solutions.

On October 9, the 2020 Nobel Peace Prize was awarded to the World Food Programme (WFP), and a few days later, on 16 October, during FAO’s World Food Day, prominent world personalities and leaders, including Pope Francis, called for effective and sustainable solutions to hunger problems.

The world produces enough food for everyone, so it is unacceptable that 690 million people are undernourished, 2000 million do not have regular access to sufficient amounts of safe and nutritious food, and 3000 million cannot afford a healthy diet
Maximo Torero, FAO’s Chief Economist

Meanwhile, in parallel, leading experts released a series of studies that indicate ways to move towards the resolution of this fundamental issue for the future of humanity.

The Director-General of the Food and Agriculture Organization of the United Nations (FAO), QU Dongyu, acknowledged that these declarations make “the eye of the international community turn to millions of people who suffer from food insecurity or who are at risk of suffering from it.”

According to QU, what is needed now is “intelligent and systematic action” that provides “food to those who need it and improves what they already have”, taking measures to “prevent crops from rotting in the fields due to lack of efficient supplies”, promoting the use “of digital tools and artificial intelligence in order to predict dangers to production, automatically activate harvest insurance and reduce climate risk.”

In addition, we should act to “save biodiversity from continuous erosion”, turn “cities into the farms of tomorrow” and governments should implement policies to make healthy diets more accessible.

David Beasley, WFP Executive Director, reflected on the 2020 Nobel Peace Prize that was awarded to the Organization and stressed that it “has focused global attention on the hungry and the consequences of conflict.”

Meanwhile, he added, “the climate shock and economic pressures have further aggravated the situation”, and currently “the global pandemic and its impact on economies and communities is pushing millions of people to the brink of starvation.”

According to a recent FAO report, 690 million people (about 8.9 percent of the world’s population) suffer from hunger and the effects of COVID-19 may increase this figure by 130 million people before the end of 2020.

Pope Francis recalled that “it is not enough to produce food, but it is also important to ensure that food systems are sustainable and provide healthy and affordable diets for all”, seeking “innovative solutions that can transform the way we produce food for the well-being of our communities and our planet, strengthening recovery capacity and long-term sustainability.”

The Catholic pontiff described hunger “not only as a tragedy but a shame,” calling for concrete policies and actions.

He suggested that “a brave decision would be to establish, with the money used for arms and other military expenses, a world fund to be able to definitively defeat hunger and help the development of the poorest countries” and, in this way, avoid “many wars and the emigration of so many of our brothers and their families who are forced to abandon their homes and countries in search of a more dignified life.”

In October, a group of renowned international organizations and think tanks, including FAO, called on donor countries to double investments to eradicate hunger by 2030. In 2015, the international community at the United Nations headquarters in New York set 2030 as the year in which to reach the global goal of eliminating hunger and poverty, as well as to achieve other major Sustainable Development Goals (SDGs).

According to the study, donors must spend an additional $ 14 billion on average a year by 2030, which is equivalent to doubling current spending for food security and nutrition.

According to FAO’s Chief Economist, Maximo Torero, “the world produces enough food for everyone, so it is unacceptable that 690 million people are undernourished, 2000 million do not have regular access to sufficient amounts of safe and nutritious food, and 3000 million cannot afford a healthy diet.”

If the contributions of the richest countries are doubled as requested, “with technology, innovation, education, social protection and trade facilitation” hunger can be overcome within the deadlines set by the international community, said the expert.

David Laborde, a scholar at the International Food Policy Research Institute (IFPRI), argued that in addition to the contribution of donor countries, the poorest countries must increase spending from their own budgets to achieve the SDGs “and double the income of 545 million of small-scale farmers and limit agricultural emissions in accordance with the Paris Climate Agreement.”

In order to advance on these reflections that allow more concrete solutions, the Secretary-General of the United Nations, António Guterres, proposed the holding of a Summit on food systems, whose preparatory meeting will be held in Rome before the boreal summer of 2021, and the final meeting of Heads of State and Government or their high representatives will take place in September of next year in New York.

According to Queen Letizia of Spain, it is necessary to reconsider “current food production models from the perspective of social, economic and environmental sustainability.” In her opinion, it is also a “public health priority linked to the degradation of the environment in its broadest sense, to the loss of agro-biological diversity, to food waste and to the duty to ensure decent livelihoods for the workers in the food system,” recalling the growth trends of malnutrition, micronutrient deficiencies, overweight and obesity.

In the search for ways to build synergies between countries, in order to face the effects of COVID-19 on food security and its possible future solutions, the President of Italy, Sergio Mattarella, recalled the initiative that his country presented to the FAO.

It is a proposal aimed at creating a coalition of nations on food, which has already been welcomed by about 40 countries from all regions, to exchange experiences of what is happening, identify where the areas of greatest risk are, explore the best ways to face these effects and prepare for the post-COVID-19 phase in this sector.

“An adequate and balanced diet must be within the reach of everyone, together with the old connection with culture, tradition and land,” fighting “the hateful action of food waste”, calling on the international community to assume protection” of the precious goods that Earth offers us” to safeguard it “for future generations.”