Waldeli Melleiro is a project manager at the Brazil Office of Friedrich-Ebert-Stiftung (FES) and Christoph Heuser is the resident representative at the FES Brazil Office. 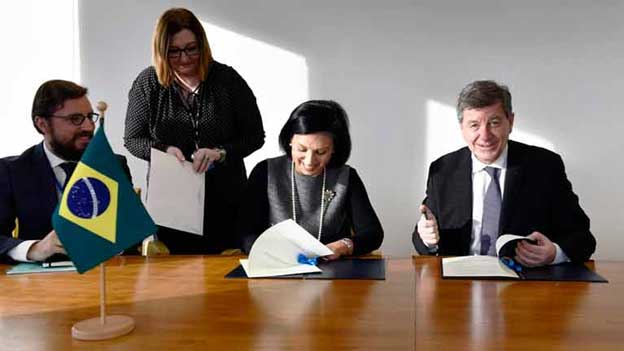 On 31 January 2018, the Government of Brazil deposited the formal instrument of ratification with the International Labour Office for ratification of the Convention on Decent Work for Domestic Workers, 2011 (No. 189) . Accordingly, Brazil became the twenty-fifth member State of the ILO and the fourteenth member State in the Americas region to ratify this Convention. It is estimated that there are about seven million domestic workers in Brazil, six million of them women, and more than in any other country in the world. Moreover, the majority of domestic workers are women, with indigenous peoples and persons of African descent being over-represented in the domestic work sector. But how has the Convention been implemented?. Credit: International Labour Organization (ILO), Geneva

SAO PAULO, Brazil, Oct 21 2020 (IPS) - The inclusivity of Brazilian society is put to the test as the coronavirus pandemic highlights a labour sector ripe with historical and structural inequality: domestic work.

The first death of COVID-19 in Rio de Janeiro was emblematic of the country’s inequities: a domestic worker who caught the new coronavirus from her employer. Much has since been written about the Brazilian government and its catastrophic inaction during the pandemic.

But the new normal also highlights a sector that has always been present in Brazil but with little public attention. A sector, in which the historical and structural inequality in Brazil is very much represented: domestic work.

With about 6 million female workers, domestic work is the second-largest occupation for women in Brazil. They are mostly black (about 65 per cent) and many are over 45 years old (46.5 per cent).

They start working sometimes as teenagers or even children, and because they lack access to most labour rights and social protection, even after 50 years or more of continuous work they still do not have the right to retirement and well-deserved rest.

They live far from their workplaces, often earn less than the legal minimum wage of around 200 USD per month, and are nonetheless often responsible (45 per cent of them) for the income of their families.

Among the poorest of these workers (less than 1,5 USD/day), 58.1 percent are heads of household, which gives an indication of the extreme poverty in which their families live.

The lack of labour protection

Domestic workers have long been fighting for recognition of the value of their work and for labour rights. The struggle in Brazil goes back to the 1930s, with the founding of the Professional Association of Domestic Employees of Santos.

In 1988 the new Constitution guaranteed paid leave and a 13th month of salary, among others. But domestic workers continued to have fewer rights than those in other professions.

Several further rights were only obtained in 2013 under the former administration of Dilma Rousseff, including the limiting of working hours to eight per day and 44 per week, the right to recognition of overtime, and paid retirement.

Despite these advances, many female workers are still excluded from many of those rights, which are guaranteed only to those who work at least three days a week in the same job. And even where the conditions are met, many employers persistently fail to respect workers’ rights, while monitoring compliance is difficult.

Those who work for the same employer for one or two days a week, known as day workers, remain completely unassisted by the law and social protection.

Furthermore, the degree of informality in domestic work is very high: In 2018, only 27 percent of women workers had a formal contract, if we are adding those paying individually even without having a formal contract, only 39 percent contributed to social security.

Thus, the vast majority of female domestic workers are not entitled to unemployment insurance, sickness benefit and retirement.

The new normal of work during and after the pandemic

Domestic work is one of the occupations most affected by the pandemic.

Many workers are in high-risk age groups; their working conditions expose them to more possibilities of contamination; they use public transportation over long distances; they care for elderly people or children with unavoidable physical proximity; and they often have to work without proper protective masks, gloves, or alcohol gel.

Or even worse: in order to keep their jobs and limit contamination, some stay for days and weeks on end in the homes where they work, away from their families.

As the pandemic took hold, the government allowed employers of domestic workers to suspend the contract for up to two months, with two months of secure employment after the suspension. It also allowed partial employment.

But this only helped the minority of domestic workers with such a contract. Most have precarious positions and many of those, especially day workers, have been dismissed and left without income and vulnerable.

Despite the pandemic, domestic workers are standing firm in the fight for labour rights. In March 2020 Fenatrad (National Federation of Domestic Workers) launched a campaign under the slogan “Take care of those who take care of you, leave your domestic worker at home, with paid wages.”

According to Luiza Batista, president of Fenatrad, there was good coverage in social networks, but in practice there was little adhesion by employers. Fenatrad has been carrying out an intense programme of denunciation and negotiation.

The group has also campaigned against a controversial measure by some state governments, for example Pará, to declare domestic work as an essential service during lockdown, forcing workers to continue working.

This measure was reversed after pressure from Fenatrad to specify what functions within domestic work are essential. The category was refined to include only nannies, careers for the elderly, and those caring for people with special needs and whose employers are keyworkers, e.g. in the health or security sectors.

Still the question remains: if domestic work is essential why it is not valued? It is fundamental work, but it is marginalized and carries the prejudices of a society in which social rights are not within reach for everyone.

The pandemic stresses the importance of domestic work and at the same time showed its precariousness as well as the inequality within the Brazilian society. It is time to reflect on the need for change in paid domestic work, aiming at a fair and inclusive society.

The new normal should recognize and value domestic work, including adequate labour rights as an important step on the long way to a more just society.