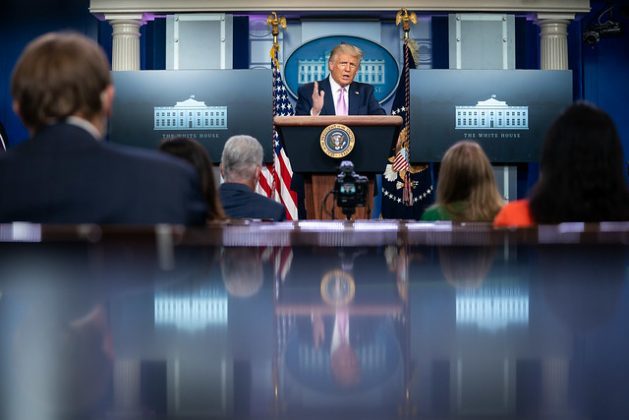 OXFORD, Nov 23 2020 (IPS) - The 2020 election has revealed a deeply divided nation, perhaps at its most divided since the Civil War. Many Americans are still uncertain about how the transition to the new administration will be achieved with a minimum of disruption and perhaps even violence. However, the split between pro and anti-Trump voters is not based on two sets of facts, but on facts and “alternative facts” or falsehoods.

By all accounts, it is clear that President Trump has lost his bid for re-election, but many of his supporters still continue to claim that he has won. More than two weeks after the election when courts have dismissed claims of vote rigging, and a majority of world leaders have congratulated the incoming President Biden, Trump’s attempts to undo the election result have been a farce.

In recent days, the courts have again dealt a series of deadly blows to Trump’s claims of a stolen election. On November 20th, Georgia finished its statewide audit of the votes, confirming that President-elect Joe Biden had defeated President Trump by 12,284.

Trump introduced a new level of crudeness and vulgarity to US politics and made use of terms that belong in the gutter, not in a serious presidential campaign.

In an unusual move, Trump invited Republican Michigan lawmakers to the White House, presumably to influence the outcome of the certification of votes. On Saturday 21 Nov, the Michigan Republican Party and Republican National Committee sent a letter to the State Board of Canvassers asking them to delay certification for 14 days. But the Michigan Department of State said delays and audits were not permitted by law, and confirmed that Biden had won by more than 154,000 votes in the state.

In Pennsylvania, Trump’s lawyers sought to invalidate millions of mail-in votes where Biden has a margin of more than 81,000 votes in the state, but Federal Judge Matthew Brann of the US District Court in the Middle District of Pennsylvania, a well-known Republican, dismissed the lawsuit saying “like Frankenstein’s Monster” it had been “haphazardly stitched together”. Brann added: “… this Court has been presented with strained legal arguments without merit and speculative accusations, unpled in the operative complaint and unsupported by evidence.”

In the face of compelling evidence that Trump has lost the election, many experts see his continued refusal to concede as setting a dangerous precedent and posing a threat to democracy. Some have argued that “Trump has never been more dangerous than he is now”.

“On his darkest day, Richard Nixon would never have attacked democracy the way Donald Trump has now done,” John Dean, who served as White House counsel for Nixon, told AP. “At the potential of losing, Trump has shamed himself and soiled the American presidency. God save us when he actually loses.”

The Republican Senator Mit Romney put it best in a tweet: “Having failed to make even a plausible case of widespread fraud or conspiracy before any court of law, the president has now resorted to overt pressure on state and local officials to subvert the will of the people and overturn the election. It is difficult to imagine a worse, more undemocratic action by any sitting American president.”

Before some members of Trump’s base start feeling nostalgic about Trump’s period in office, it is important to remind ourselves of some of the main characteristics of that era and what it represented domestically and internationally.

Trump conducted his 2016 presidential campaign by using very insulting terms in describing his rivals, something which he continued to do after being elected president. In fact, it can be argued that he never stopped campaigning, and his behavior in office was practically a long campaign for re-election.

In the entire US history, no president has ever insulted his opponents, including the leading members of his own party, in the way that Trump has done. These are just some of the terms that he used frequently to refer to some leading US politicians: Sleepy Creepy Joe, Cheating Obama, Crooked Hillary, Nervous Nancy, Wild Bill, Crazy Bernie, Little Rubio, Lying Cruise, Little Bloomberg, Leaking Sneaky Dianne Feinstein, Wacko John Bolton, Low Energy Jeb, Jeff Flakey, Leaking Comey, Al Frankenstein, Pocahontas, Corrupt Kaine, etc.

These were not meant as terms of endearment or jokes, but as deliberate insults to demean, belittle, bully and intimidate his opponents and incite violence against them. During his debates with 2016 Democratic Candidate Hillary Clinton the crowd often chanted “lock her up”, and Trump cheered them on.

I wonder if Trump has ever bothered to think what people in other countries might think of US politicians when a US president describes his colleagues in those unflattering ways. No wonder that the US reputation in the world has plummeted under Trump.

Trump repeated the same disgusting pattern of behavior during the 2020 election campaign towards former Vice-President Joe Biden and his running mate Senator Kamala Harris. Harris is the first black woman and the first South Asian American woman to be chosen as vice-president. She has had a distinguished career as a senator and Attorney General of California, and is highly educated. Yet, Trump insulted Harris’s intelligence by saying that her presidency would be “an insult to our country.”

Not only did he attack her policies, but also used personal, racist and sexist insults against her. Apart from claiming that she would be “a big slasher of funds for our military”, Trump repeatedly accused her of being “disrespectful and nasty”. During an interview on 8 October 2020, Trump falsely said that Harris was a communist and twice referred to her as “a monster”.

He slammed Harris’s treatment of Brett Kavanaugh during his confirmation hearing for his nomination to the US Supreme Court, saying “That was a horrible event. I thought it was terrible for her. I thought it was terrible for our nation. I thought she was the meanest, the most horrible, most disrespectful of anybody in the US Senate.” During the election campaign he said of her: “Kamala Harris is really Bernie Sanders with a skirt”, describing her as “shameless” and “clearly willing to do anything for power.” This is reminiscent of the way that Trump often speaks of women and people of color.

In fact, shortly after winning the presidency, Trump appointed his daughter and son-in-law to senior political positions without any obvious merit or qualifications on their part. This can only be regarded as an extreme act of nepotism, almost unprecedented under former administrations.

It is remarkable that all his campaign speeches consisted mainly of slogans and insults and were almost totally lacking in any policies or visions for the future.

The language that Trump has adopted to refer to his rivals and even colleagues is not the kind of language that a US president or indeed any decent person should use in reference to distinguished people.

Trump introduced a new level of crudeness and vulgarity to US politics and made use of terms that belong in the gutter, not in a serious presidential campaign. He has demeaned the office of the US president, something that may take a long time to overcome.