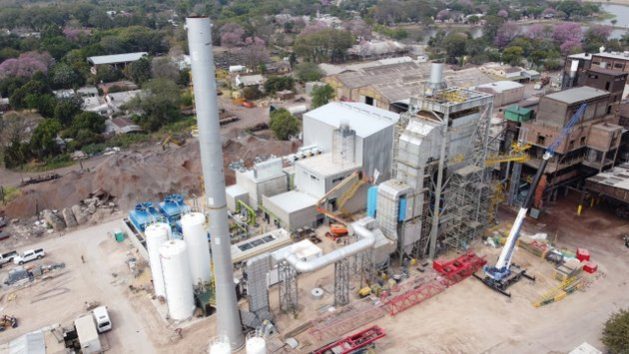 The Unitán company's biomass electricity generating plant in the municipality of La Escondida, in the northeast Argentine province of Chaco, which began to operate in December, cost 18 million dollars to build and will supply up to 6.6 MW to the country’s power grid. CREDIT: Courtesy of Unitán

BUENOS AIRES, Feb 19 2021 (IPS) - The forest is the main resource in the Chaco, a vast plain shared by Argentina, Bolivia and Paraguay. And how to use it sustainably is the most difficult question. Two recently inaugurated power plants fired by forest biomass provide a possible answer, although they are not free of controversy.

The plants, located in northeastern Argentina, generate electricity from waste from the production of tannin, a wood extract traditionally used for tanning leather.

The international trade in tannin peaked in the early 20th century before going into decline. But in the last 15 years research has opened the door to the development of new uses in areas such as animal production and paper and cardboard manufacturing, replacing chemical additives.

“The biggest threat to native forests today is deforestation to make way for agricultural production. But at other times it was irrational management of the forestry industry, which continues to be one of the main generators of employment in the province,” said Luciano Olivares, undersecretary of Forestry Development in the Argentine province of Chaco.

“That’s why we believe that using the waste from tannin production to produce renewable energy is an environmentally friendly solution, especially in a province like ours, where half of the 100,000 square kilometres are covered with native forest,” he added in a conversation with IPS by telephone from Resistencia, the provincial capital, some 1,000 kilometres north of Buenos Aires.

The plants were inaugurated on Dec. 2 with the virtual presence of President Alberto Fernández from Buenos Aires, who touted them as a good example of the path “that we have to build” to overcome the pandemic.

Poverty rates in the Chaco have always been among the highest in this vast Southern Cone country of 44.5 million people. But due to the pandemic, the poverty rate has soared to nearly 50 percent of the provincial population of 1.1 million. 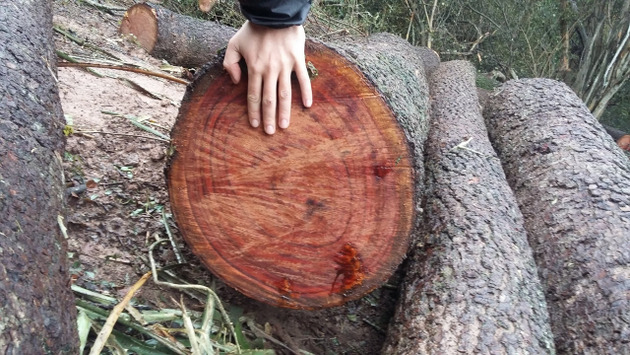 A freshly felled trunk of willow-leaf red quebracho lies in a forest in the Chaco region in northeastern Argentina. Native to South America, this straight-trunked tree is highly valued for its high tannin content and its hardwood, which gave rise to its name in Spanish: “quebra hacho (axe breaker)”. CREDIT: Courtesy of Riccardo Tiddi

The president said the sustainable use of the forest can contribute both to “better distribution of income” and to “the possibility of using renewable energies in production.”

Electricity generation was undertaken in the area by two companies with more than 100 years of experience in the extraction of tannin from the willow-leaf red quebracho (Schinopsis balansae), a tree which forms forests in the Chaco and is renowned for its high-quality hardwood.

Unitán reported that it invested 18 million dollars in the construction of its power plant, which has an installed capacity of 6.6 MW. The plant built by the other company, Indunor, cost 25 million dollars and will contribute 10 MW to the national grid, besides what it uses to fuel the factory itself.

These are two of the most important private companies in a province where public sector jobs and social assistance play an especially large role. Both are closely involved in the life of the two small towns where their industrial plants are located: Puerto Tirol and La Escondida, respectively.

Tannin is obtained by immersing shredded wood in hot water, in a manner similar to brewing tea. The wood residue is sent to a boiler, where it generates high-pressure steam that runs a turbine to produce electricity. 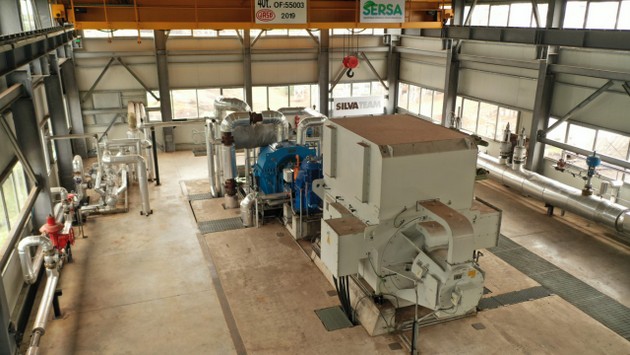 “In the Argentine Chaco there was a massive deforestation process at the beginning of the 20th century, which had to do with the tannin industry and the provision of railway ties for the expansion of the railroad,” explained Adrián Zarrilli, a professor at the National University of Quilmes who specialises in environmental history. “This came to a halt in the 1940s, among other things because chemical products emerged that were more effective than tannin for tanning leather.”

Zarrilli is critical of the current use of quebracho trees for producing electricity. “I believe that sustainable development models can be developed in the Chaco, such as integrated management of forests and livestock farming. But cutting down what little is left of the native forest to produce tannin, a replaceable product, and then generating electricity with the waste, seems irrational to me,” he said in Buenos Aires.

The companies, however, assert that their activities, far from being harmful to the environment, are helping to regenerate native forests in the Chaco. This ecoregion accounts for the bulk of deforestation in Argentina, which in the period 2014-2018 amounted to 179,000 hectares per year, according to official data.

Michele Battaglia, president of Indunor, told IPS that “our factory has two sources of quebracho. One, unfortunately, is the deforestation generated by agricultural producers. The other is sustainable forest management.”

Battaglia, a descendant of an Italian family that first got involved in the plant extracts business in 1854 and came to Argentina in 1925, explained that “in the Chaco we extract only five tons of quebracho per hectare, out of the 70 to 100 available. 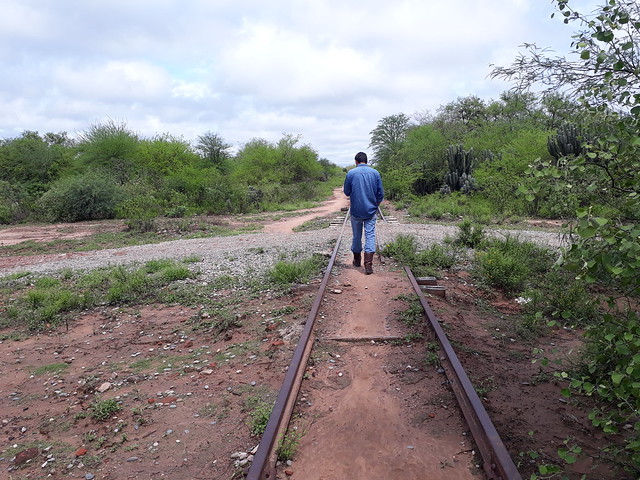 A man walks along an old, abandoned railway track in a rural area of Argentina’s Chaco region where most of the native forest has been cleared. This region accounts for the bulk of the nearly 180,000 hectares of forest that, according to official data, are lost each year in Argentina. CREDIT: Daniel Gutman /IPS

“We remove the biggest trees so the little ones have room to grow and don’t waste energy competing with each other,” he said over the phone from La Escondida.

Battaglia states that “contrary to what environmental activists say, a forest that is left untouched in the Chaco becomes too crowded and retains less carbon and less water than a well-managed forest. That is why it is best to manage forests. In the Chaco we have the opportunity to carry out a social, economic and environmental revolution, if we generate economic activity with the forests that today are underutilised.”

Unitán’s vice president, Ariel López Mato, also mentioned to IPS the generation of electricity “as another way to produce income while caring for the environment.”

In addition, he highlighted the new value of tannin, which now is used as a natural antibiotic for cows, pigs and chickens, whose infections were usually treated with zinc oxide.

“There are many uses that can be given to the forest, especially if the waste products from industrial processes are used, within the framework of what is now called circular energy. We are now experimenting with the use of wood ash as a substitute for lime in manufacturing bricks and repairing roads,” added López Mato from Puerto Tirol, by telephone. 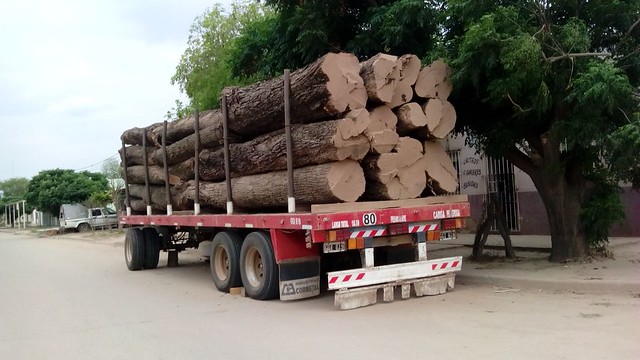 A truck carries freshly cut native tree trunks in the town of Miraflores, in the northeast Argentine province of Chaco. Forests are an important resource in one of the poorest regions of the country, and part of the wood extracted comes from the clearing of land by agricultural producers. CREDIT: Daniel Gutman /IPS

However, environmental organisations are not convinced of the rationality of continuing to cut quebracho trees for the tannin business, which decades ago attracted dozens of companies, of which today only Unitán and Indunor remain.

“If these companies had hundreds of thousands of hectares of their own land on which they cut quebracho trees that they themselves planted 50 or 100 years ago, that would be one thing. But almost all of what goes into the tanneries comes from private farms or indigenous reserves, and this encourages deforestation,” Riccardo Tiddi, a physicist of Italian descent from Resistencia, told IPS.

“They consume many tons of quebracho per year and most of it is bought from third parties, so the companies are not responsible for where the material comes from,” added Tiddi, who has lived in the province for years and is part of Somos Monte Chaco, an environmental collective made up of peasant farmers and indigenous people.

According to official data, 12,648 hectares of native forest were lost in the province in 2019, 52 percent under permits and the rest illegally.