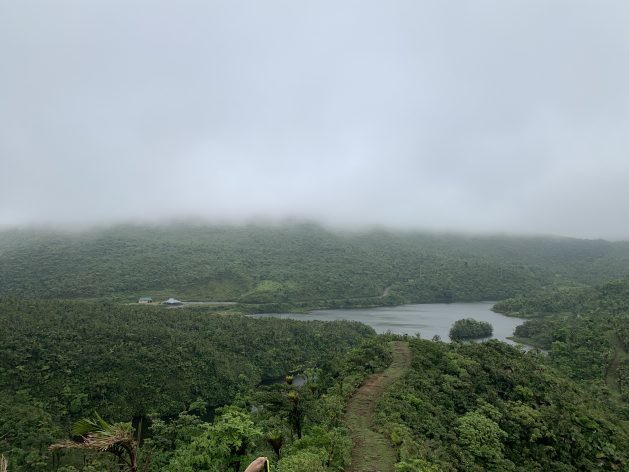 The WMO has warned that the ability of land ecosystems and oceans to act as sinks may become less effective in the future. Laudat, Dominica. Credit: Alison Kentish/IPS

DOMINICA, Oct 27 2021 (IPS) - A few days before the international community gathers for COP26, widely considered the most important climate conference since the 2015 gathering which resulted in the Paris Climate Agreement, the World Meteorological Organization (WMO)  is reporting that despite global hits in trade and travel by the COVID-19 pandemic, the concentration of greenhouse gases in the atmosphere reached a new high in 2020.

The United Nations Agency issued its annual Greenhouse Gas Bulletin on October 25. It is the seventeenth bulletin and it concludes that from 1990 to 2020, heating of the earth by greenhouse gases spiked by 47 percent, with carbon dioxide responsible for almost 80 percent of this hike.

“Concentration of carbon dioxide (CO2), the most important greenhouse gas, reached 413.2 parts per million in 2020 and is 149% of the pre-industrial level,” the report stated, adding that “the economic slowdown from COVID-19 did not have any discernible impact on the atmospheric levels of greenhouse gases and their growth rates, although there was a temporary decline in new emissions.”

“Roughly half of the CO2 emitted by human activities today remains in the atmosphere. The other half is taken up by oceans and land ecosystems,” it added, warning that “the ability of land ecosystems and oceans to act as “sinks” may become less effective in future, thus reducing their ability to absorb carbon dioxide and act as a buffer against larger temperature increase.”

The statistics are crucial ahead of next week’s climate talks. Countries are being urged to commit to increasingly ambitious targets for reducing greenhouse gas emissions.

“It is clear from the science that the concentration of greenhouse gases is driving climate change and if we are able to mitigate those emissions and phase out the negative trend in climate, that should be our aim,” said Petteri Taalas.

“Some features will continue for hundreds of years like the melting of glaciers and sea-level rise as we already have such a high concentration of carbon dioxide and this problem will not go away soon……..we have to start dealing with emissions in this decade. We cannot wait, otherwise, we will lose the Paris targets. The progress has been too slow,” Taalas added.

The WMO’s chief of atmospheric and environment research division Oksana Tarasova says climate commitments by nations must translate into action.

“There is no way around it. We need to reduce emissions as fast as possible. When countries are making commitments to be carbon neutral, the atmosphere gives us a very clear signal that our commitments should be converted into something that we can see in the atmosphere. If we do not see at least a decrease in the growth rate of the major greenhouse gases, we cannot declare success in the climate agenda,” she said.

They concluded that the world is ‘nowhere near’ where it needs to be to tackle the climate crisis. Executive Secretary of the United Nations Framework Convention on Climate Change Patricia Espinosa called for an ‘urgent redoubling of climate efforts’ to ensure that global temperatures do not soar past the goals of the Paris Agreement.

“Overshooting the temperature goals will lead to a destabilized world and endless suffering, especially among those who have contributed the least to the GHG emissions in the atmosphere,” she said.
“This updated report, unfortunately, confirms the trend already indicated in the full Synthesis Report, which is that we are nowhere near where science says we should be.”
For WMO officials, a timely, ‘stark scientific message’ is being sent to the world.

“At the current rate of increase in greenhouse gas concentrations, we will see a temperature increase by the end of this century far in excess of the Paris Agreement targets of 1.5 to 2 degrees Celsius above pre-industrial levels,” WMO Secretary-General Taalas said.