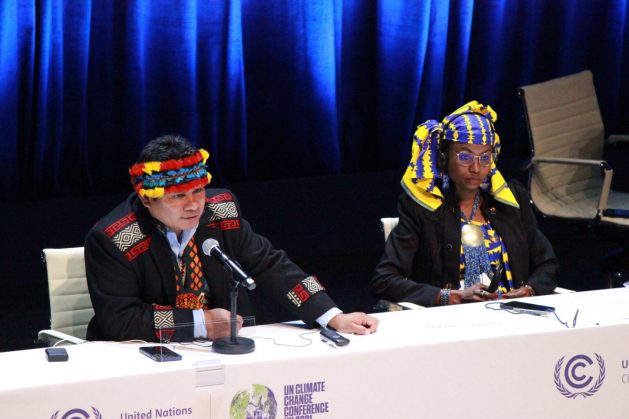 In the face of substantial international offers of funding for indigenous lands and forests at COP26, indigenous peoples are calling for specific schemes for their participation. Shuar leader Katan Kontiak (left) of Ecuador and Hindou Oumarou Ibrahim of Chad took part in a Nov. 2 forum on the indigenous peoples and local communities platform. CREDIT: Emilio Godoy/IPS

GLASGOW, Nov 4 2021 (IPS) - “For my people, the effects of climate change are an everyday reality. The rainy season is shorter and when it rains, there are floods. And we’ve suffered droughts.” said Hindou Oumarou Ibrahim, a member of the Wodaabe or Mbororo pastoral people of Chad.

For the founder of the non-governmental Association of Indigenous Women and Peoples of Chad, one pernicious effect is the violence generated, because “When people lose their resources, they fight for them, water, for instance,” she told IPS after a forum on the progress made by native groups at the climate summit in Glasgow, Scotland.

Around the world, indigenous peoples face the ambiguity of protecting ecosystems, such as forests or coastal zones, while at the same time suffering the onslaught of climate fury unleashed by humanity’s addiction to fossil fuels, like droughts, destructive storms and rising sea levels.

For decades, native peoples have insisted that their traditional knowledge can contribute to the fight against climate change. The emergence of the covid-19 pandemic in 2020 reaffirmed the results of treating nature as just another commodity.

Although in the last decade, indigenous representatives have gained a place at environmental summits, such as the 26th Conference of the Parties (COP26) of the United Nations Framework Convention on Climate Change (UNFCCC), which began on Sunday Oct. 31 in this city in the UK, now they want to be more than just token participants.

“We hope that the summit takes indigenous communities into account. We need funds that go directly to indigenous peoples,” Graciela Coy, an indigenous woman from Ak’Tenamit (our people, in the Q’eqchi’ language), a non-governmental organisation that works in northern Guatemala, told IPS.

Representatives of indigenous organisations have gained a place in every part of the COP. They participate as observers in the official sessions where the agreements are debated, in the parallel summit of social movements and in all the other forums held during the two weeks of the climate conference.

One of the expectations this year among indigenous people is the approval of the three-year working plan of the Local Communities and Indigenous Peoples Platform that emerged at COP21, which approved the Paris Agreement in 2015.

The proposal must be approved by the Facilitative Working Group, composed of seven indigenous and seven government representatives and endorsed at COP24, held in the Polish city of Katowice in 2018. It must then be ratified by the plenary of the 196 Parties to the COP and is to include capacity building activities for indigenous groups, the mapping of measures for their participation in the UNFCCC and financing.

Between 2019 and 2021, the group conducted 11 activities, with no physical sessions due to the pandemic.

Climate policies are the focus of COP26, which ends Nov. 12, after being postponed for a year as a result of the covid-19 pandemic.

Government delegates at COP26 are addressing carbon market rules, climate finance of at least 100 billion dollars per year, gaps between emission reduction targets and necessary reductions, strategies for carbon neutrality by 2050, adaptation plans and the working programme for the local communities and indigenous peoples platform.

Victoria Tauli-Corpuz, an indigenous activist from the Kankana-ey Igorot people of the Philippines, said the inclusion of human rights in the financing of emission reductions and adaptation to the effects of the climate crisis, as well as in the creation of carbon markets, is fundamental.

“Indigenous peoples suffer too the climate solutions, such as renewable energy projects. There should be effective safeguards, for guaranteeing indigenous peoples’ human rights” in climate policies, the former U.N. Special Rapporteur on the Rights of Indigenous Peoples between 2014 and 2020 told IPS.

This respect has become urgent in areas such as the Amazon, the main jungle in Latin America shared by eight countries and a French territory, whose indigenous inhabitants have suffered the deterioration caused by the inroads made by agribusiness, livestock, soybean, hydrocarbon and mining companies, as well as the construction of dams, railroads, highways and river ports.

For this reason, Tuntiak Katan, a member of the indigenous Shuar people of Ecuador and general coordinator of the Global Alliance of Territorial Communities (GATC), told IPS that the removal of extractive activities from this ecosystem is a fundamental condition for making progress in protection of the climate.

“Indigenous peoples already protect 950 million hectares of land worldwide. What we are asking for is the protection of 80 percent of the Amazon by 2025. We are the voice of the women, children and elders” who suffer the impacts on the territories, said Katan, vice-coordinator of the non-governmental Coordinating Body of Indigenous Organisations of the Amazon River Basin (Coica).

The most recent scientific evidence shows that native peoples are the most effective protectors of tropical forests, which is why greater efforts are required for their conservation in the face of growing threats. 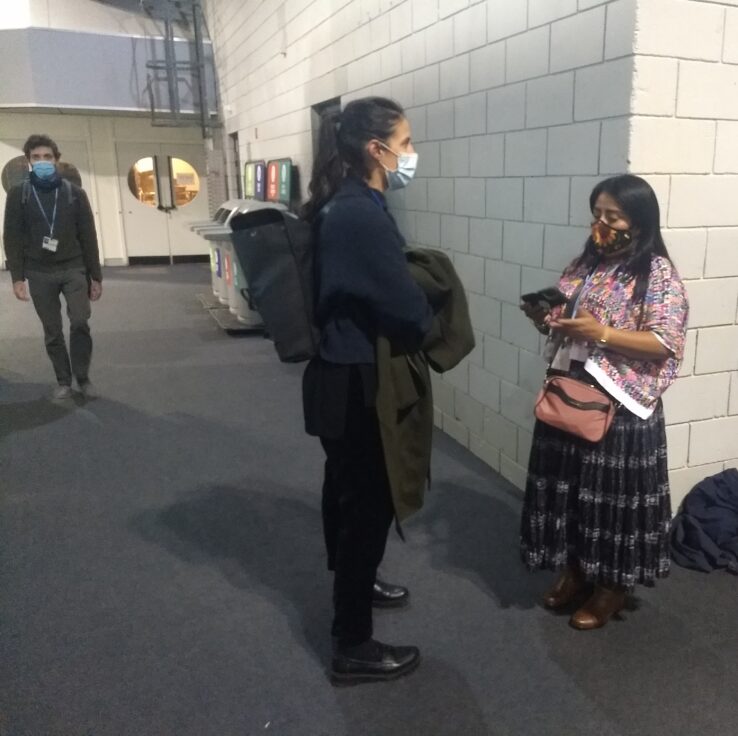 In the face of the abundant offers made during the first week of COP26 activities to promote indigenous land tenure and reforestation, indigenous peoples were skeptical and demanded direct participation in these schemes.

Oumarou Ibrahim and Coy agreed on the need to define mechanisms to ensure that the resources provided reach the territories directly.

“World leaders should be our partners. Financing should be adapted to people’s needs. The issue is how resources are going to reach directly to the indigenous peoples,” said Oumarou Ibrahim.

In Coy’s opinion, the fight against climate change requires the allocation of funds, which should be transferred “to indigenous peoples, as there is a lot of international aid” that does not always materialise in local communities.

In an acceptance of what native peoples have been demanding for years, the governments of Germany, the Netherlands, Norway, the United Kingdom, the United States and 17 private funders announced on Nov. 1 the provision of 1.7 billion dollars to help indigenous and local communities preserve tropical forests between 2021 and 2025.

It is estimated that each year only 270 million dollars are allocated to forest care and just 46 million dollars go to the direct guardians of the forest: their ancestral inhabitants.

Direct multilateral funding to aboriginal populations has been a recurring barrier to efforts to protect natural resources.

For example, the Green Climate Fund (GCF), created at COP16 in Cancun in 2010, has financed 121 community livelihood projects and delivered a total of 1.4 billion dollars.

For a total of 190 projects, it has disbursed two billion dollars and another six billion are in the pipeline. In addition, it has committed another 10 billion for projects. It has also registered 113 institutions to receive funds, but none of them are indigenous.

Furthermore, on Nov. 2, more than 105 nations signed up to the “Glasgow Leaders’ Declaration on Forests and Land Use” which sets the target of zero deforestation by 2030.

Indigenous peoples are also demanding to be included in the Nationally Determined Contributions (NDCs), the voluntary commitments adopted by each country for 2030 and 2050 in order to comply with the Paris Agreement and on which the goal of containing global warming to 1.5 degrees Celsius is based.

“We just need a push,” said Katan. “We are sure of what we do and that is why it is good that they are offering financing. But what needs to be done is to abandon extractivism and get the oil, mining and agribusiness companies out of our territories, and apply a holistic vision, combined with the vision of the indigenous peoples.”

Even if COP26 does not produce the results desired by indigenous peoples, they will continue to care for natural resources and to demand climate justice.

IPS produced this article with the support of Iniciativa Climática in Mexico and the European Climate Foundation.