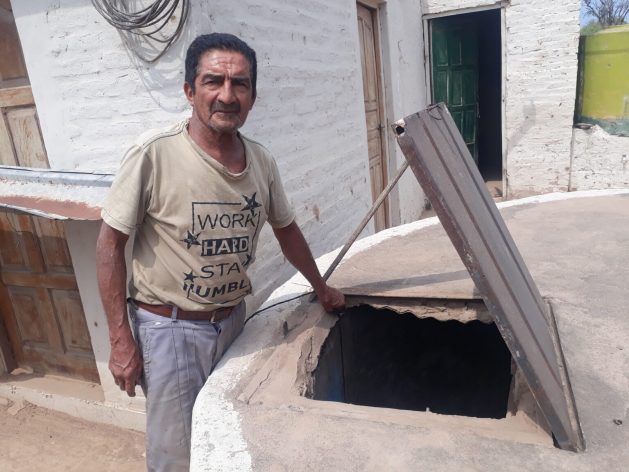 Francisco Montes shows the cement tank where he collects rainwater in El Impenetrable. Scarce rainfall in the last two years has created serious trouble for the inhabitants of this four-million-hectare ecoregion, who are scattered around the Chaco region of northern Argentina. CREDIT: Daniel Gutman/IPS

GENERAL GÜEMES, Argentina , Nov 2 2021 (IPS) - Next to the brick or adobe houses of El Impenetrable, a wild area of forest and grasslands in northern Argentina, loom huge plastic barrels where rainwater collected from the corrugated iron roofs of the houses is stored. However, the barrels are empty, because it has hardly rained for two years, local residents complain.

“Things have been very bad recently. It rained one day in September, but very little,” said Francisco Montes, who has lived for 35 years in a house in a large open area in the middle of a monotonous landscape of trees and bushes, several kilometres from his nearest neighbours.

On the dirt road leading to his house, it is rare to run into a person or a vehicle, but it is easy to come across cows, goats, horses and even pigs, since domestic animals are raised loose in this area, to roam freely in their arduous search for green pastures.

Located in the Argentine portion of the Chaco – the great sparsely forested plain covering more than one million square kilometres, shared with Paraguay and Bolivia – El Impenetrable was so named not only because of the thick brush and the scarcity of roads.

The ecosystem covering some four million hectares also owes its name precisely to the lack of water, which turns most of the vegetation a yellowish hue and is made more dramatic by the combination with temperatures that can be suffocating.

From droughts to floods

Rainfall in the area usually comes in just three months, during the southern hemisphere summer. And rains have been scarce for as long as anyone can remember in this part of the Chaco.

But for two years now the situation has been worse than usual, because the drought has been especially bad, after severe flooding in 2018 and 2019 that wrought havoc among local residents and their livestock, when it rained three times the historical average.

In the absence of piped water, Montes, who lives on his remote property with his wife, is one of the best equipped in the area to deal with the complex scenario, because in his field he not only has a large cement tank with a capacity to store thousands of litres of rainwater, which lately has been of little use. He also has an 11-metre deep well that allows them to extract groundwater.

But this is not enough either. “The water is very brackish. You would have to go at least 20 metres down to get good water,” he told IPS.

Montes, however, at the age of 73, has the resignation of someone who has lived a lifetime knowing that water is a scarce commodity. “Back then we used to take water directly from the river or from a well, when it was available,” he recalled.

He was referring to one of the branches of the Bermejo, one of the biggest rivers in the La Plata basin, which originates in Bolivia and passes about 500 metres from his field. The Bermejito – or “little Bermejo”, as the branch is known locally – is one of the few rivers in El Impenetrable, and the vegetation on its banks is a deep green colour that is not usual in this region. 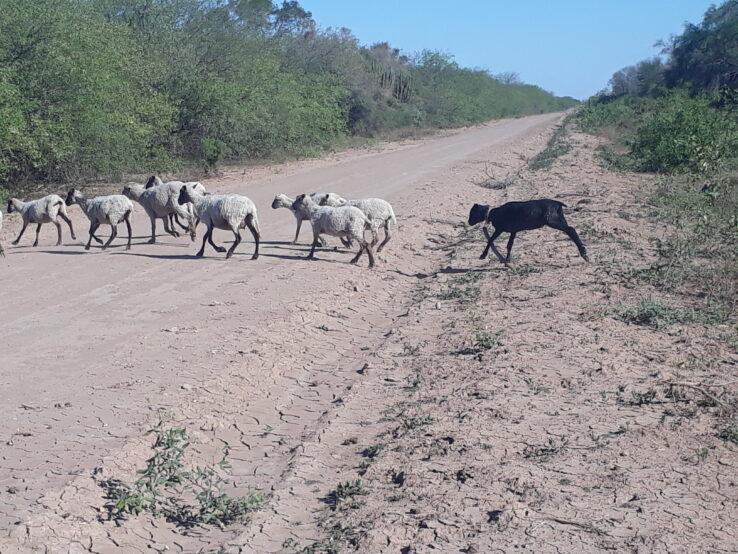 Goats cross a dirt road in El Impenetrable, an ecosystem of four million hectares, where livestock is raised loose, to roam the area in search of pasture. CREDIT: Daniel Gutman/IPS

A few kilometres from Montes’ home, near the entrance to the El Impenetrable National Park -a 128,000-hectare protected area created in 2014 – there is a 160 square metre rainwater collector sheet metal roof facility with two tanks that can store up to 40,000 litres.

It was built in 2019 to supply local residents, as part of the “Native Forests and Community” programme.

This Ministry of the Environment and Sustainable Development programme was supported by a 58.7-million-dollar loan from the World Bank and 2.5 million dollars from the national government and seeks to generate community roots in areas where there are no sources of employment.

Native Forests and Community benefits vulnerable rural communities, both indigenous and non-indigenous, through infrastructure works and training for the sustainable management of natural resources.

One of the programme’s priorities is to promote the use of renewable energies, and it has installed solar panels for electricity generation and solar stoves in areas where the most commonly used fuel is firewood.

According to official figures, the initiative has so far benefited 1,200 families from 60 communities in different provinces of the country, most of them in El Chaco and the rest of northern Argentina. 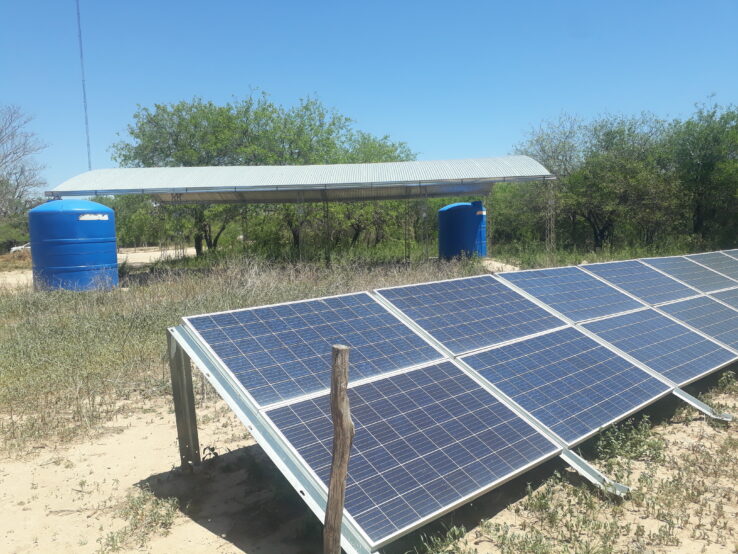 A community solar panel and rainwater harvesting roof installation near the El Impenetrable National Park in northern Argentina was built in 2019 by the Ministry of Environment and Sustainable Development, with support from the World Bank. CREDIT: Daniel Gutman/IPS

Esteban Argañaraz lives only 100 metres from the rainwater collector. Sometimes he goes to fetch water from the community tanks, although he cannot get enough there either, so he resorts to buying drinking water in the nearest town, Miraflores, which is 60 kilometres from his home down a dusty dirt road.

“This year I brought an 8,000-litre water tank. It cost 700 pesos (about seven dollars), but the complicated part was transporting it, which cost 4,000 pesos (40 dollars),” Argañaraz explained to IPS, while showing the well that was dug in front of his house to accumulate water for the animals and irrigation, which is completely dry.

Argañaraz, 60, and his wife have a garden at home to grow vegetables and fruits. But they have had to practically abandon it since 2020, due to the lack of water. Skinny cows and goats are another reflection of the severe drought.

The inhabitants of El Impenetrable rarely manage to sell any animals and almost everyone survives on social assistance. This ecosystem – environmentally degraded by the extractive economy – is part of Argentina’s Northeast region, which has the highest poverty rates in the country, with 45.4 percent of the population living in poverty.

But the situation is complicated in urban areas as well. In fact, the provincial capital Resistencia, with a population of 300,000, has the highest poverty rate in Argentina, at 51.9 percent.

Unpredictability is the rule

“The main characteristic of rainfall in (Argentina’s Chaco province) is its high variability: there are cycles of dry, normal and wet years. The other important aspect is that most of it is concentrated in one part of the year: in the case of El Impenetrable, the rainy season lasts only three months,” water resources engineer Hugo Rohrmann, former president of the Chaco Provincial Water Administration, told IPS. 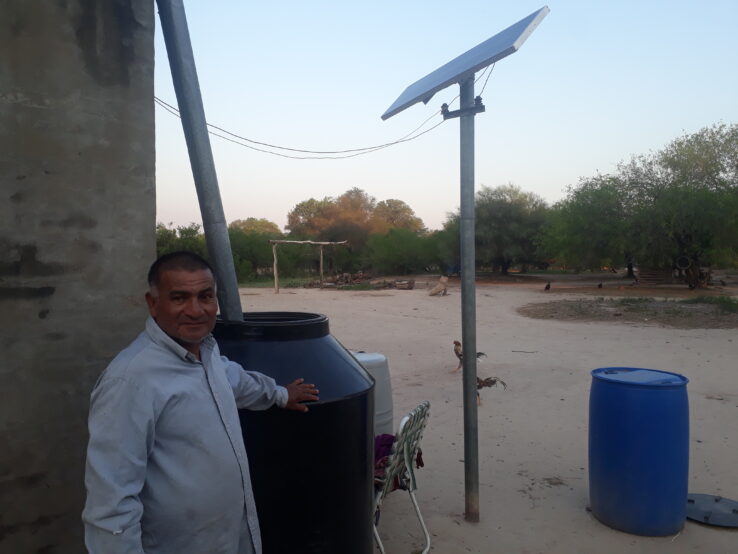 Jorge Luna, a family farmer raising cows, goats and pigs in El Impenetrable in northern Argentina, stands next to plastic barrels where he collects rainwater and a solar panel that provides electricity. Rainwater harvesting is a very limited solution for families in the El Impenetrable ecoregion due to the lack of rain. CREDIT: Daniel Gutman/IPS

The expert pointed to another important fact: rainfall in El Impenetrable is usually between 600 and 800 millimetres per year, but evaporation, due to heat that can reach 50 degrees C in summer, is much higher – up to 1,100 millimetres.

“That is why neither wetlands nor aquifers with the capacity to supply a population are formed and there is no other choice but to collect rainwater, which is also scarce. The lack of water is becoming more and more evident and makes life more and more difficult for the local population,” Rohrmann added from Resistencia.

Constanza Mozzoni, a biologist from Buenos Aires who has been living in El Impenetrable for two years doing social work, has a categorical answer when asked what life is like for the local population, both indigenous and non-indigenous people: “Everything revolves around how to get water,” she told IPS.

Mozzoni works for the Rewilding Argentina Foundation, an environmental conservation organisation that works in and around the El Impenetrable National Park, and lives in a prefabricated house that also has a rainwater harvesting roof.

The foundation, however, provides all its staff with bottled water that is brought from the town of Miraflores, along the only safe road in El Impenetrable.