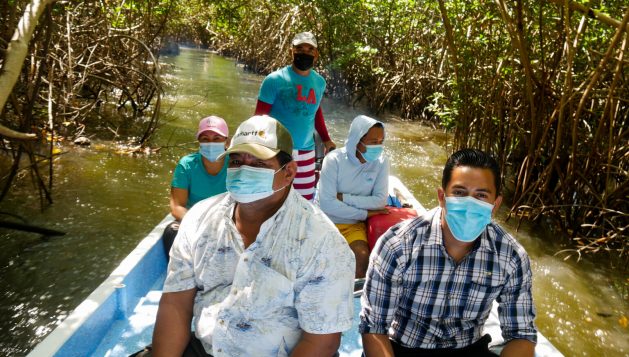 Members of families threatened with eviction ride in a boat down a mangrove channel in the community of Cuatro Vientos, in the municipality of San Luis La Herradura, on the Salvadoran coast. They denounced to IPS that one of the country's main banks now claims to be the owner of the land where they have lived for 20 years. CREDIT: Edgardo Ayala/IPS

SAN LUIS LA HERRADURA, El Salvador, Dec 6 2021 (IPS) - Small farmer Francisco Martínez pushed his son’s wheelchair to another part of the courtyard of their house, located in a small coastal community in El Salvador, before saying sadly: “It would be a great injustice if they kicked us out of here.”

Martínez, 77, lives with his wife Gloria García, 50, and their severely disabled 21-year-old son Fredy Martínez in the Cuatro Vientos community, formed some 20 years ago by homeless families from different parts of the country.

The settlement is located in San Luis La Herradura, a municipality in the south of the department of La Paz, on the Salvadoran coast.

Martínez, his skin toasted by the sun, added: “Now we have reached the difficult moment when they want to remove us, which is very unfair,” referring to the threat of eviction that is hanging over his family and others in the settlement, from a bank and wealthy families in the area, as they told IPS during a day spent in their community.

Driven by necessity, some 180 poor families settled in Cuatro Vientos, on what they considered to be public land: a narrow 17-kilometer-long strip of land separating the Pacific Ocean and the Jaltepeque estuary, one of the main wetlands in this Central American country.

A paved road runs through the middle of the strip connecting the highly touristic area with the rest of the country.

In addition to Cuatro Vientos, 18 other settlements or communities have sprung up in the area over the past 50 years and have also been threatened with eviction, either by private consortiums or by wealthy families who have beach houses there.

On this strip of land, ostentatious wealth coexists with painful poverty.

Some families do have legal title to their plots, the ones that are located along the roadside, lawyer Teresa Hernández of the Foundation for Legal Studies for the Application of Law (Fespad) told IPS.

However, some 40 meters further inland towards the estuary, the situation is different for most of the people, who live in conditions of poverty and without documents certifying that they own the land.

“In general, all 19 communities find themselves in this legally precarious position,” the lawyer explained. 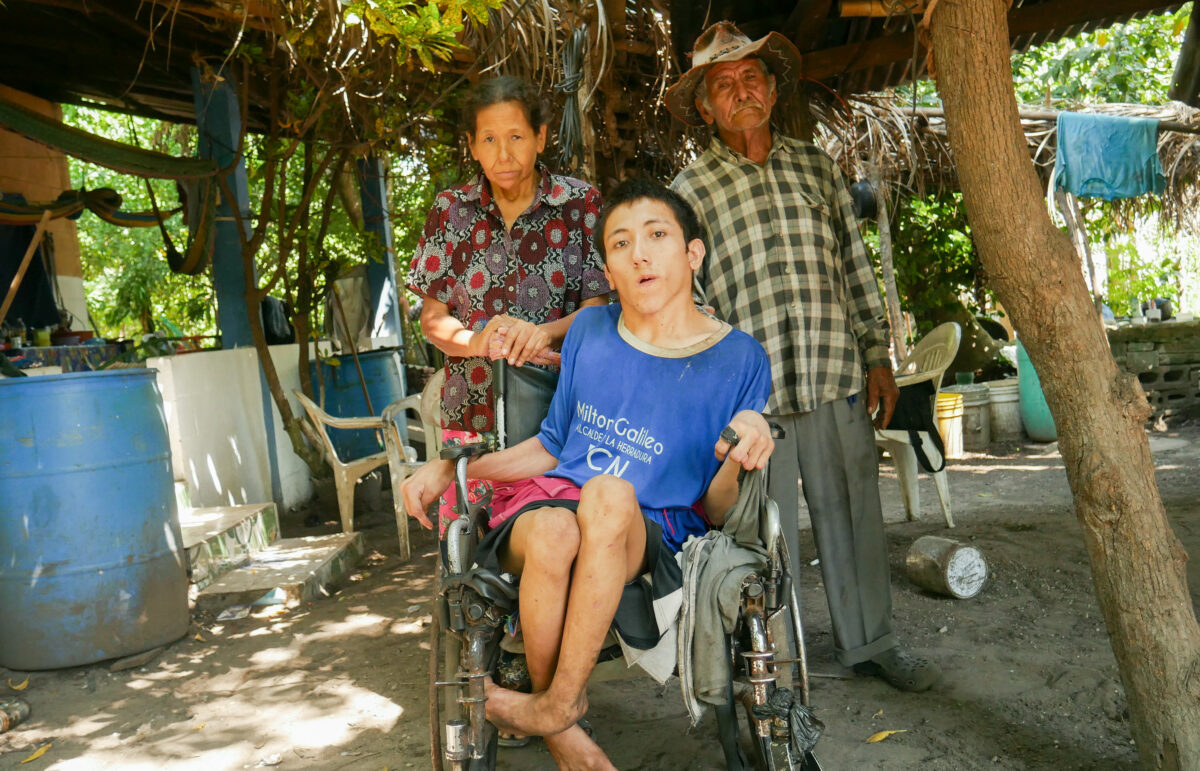 Francisco Martínez, 77, with his wife Gloria García, 50, and their severely disabled 21-year-old son Fredy Martínez pose for a photo in the courtyard of their house in Cuatro Vientos, a settlement formed some 20 years ago by homeless families from various parts of El Salvador. The Martínez family fears that they will be evicted because the property is claimed by one of the country’s main banks. CREDIT: Edgardo Ayala/IPS

Fespad and the Movement for the Defense of the Land in El Salvador (Movitierra) are providing legal assistance to the affected families, especially in 12 communities that have organized to fight for their rights.

About 850 families live in these 12 settlements, but the lawyer said she did not know the total number of inhabitants of the 19 communities.

According to official figures, about 10 percent of El Salvador’s 6.7 million people are in a position of land tenure insecurity.

Cases like those of the families in Cuatro Vientos, who thought they were living on land that they could call their own because it belonged to the State, but who now face the risk of removal.

The conflict over property rights in this area known as Costa del Sol arises from the fact that the land has a high value as a result of tourism, which drives the construction of hotel complexes.

In addition, for decades it has been impossible to establish exactly which land is privately owned and which belongs to the State, which has generated disputes over land ownership, the Fespad lawyer added.

Tourism businesses such as hotels and restaurants have set up shop there because of the beauty of the area: the sea on one side and the lush estuary, with its mangroves and wildlife, on the other.

Wealthy families have also built beach houses in the area for decades to spend vacations or weekends. That is why the real estate sector is also in high demand in the area.

Boats are moored to private docks in one of the channels of the Jaltepeque estuary. On El Salvador’s Costa del Sol, a narrow 17-kilometer-long strip separates the Pacific Ocean from one of the country’s main wetlands, where luxury homeowners and tourism and real estate companies are threatening to evict poor communities. CREDIT: Edgardo Ayala/IPS

Every beach, whether on an estuary or on the sea, belongs to the State, and wealthy families and companies have been buying up adjacent or nearby lands, initially considered private in origin. But after decades of disorder, the limits of what is private and what belongs to the State have become entangled.

Hernández said that in order to clarify these boundaries, the government’s land registry should carry out a cadastral survey to determine the background of these lands and define who owns them. But this has not been done and the communities do not have the resources to carry it out on their own.

She added that, in view of this situation, Fespad and Movitierra requested in 2019 that the governmental Institute of Property Legalization (ILP) conduct an inspection to determine the boundaries between State and private land in at least five communities on the Costa del Sol, as a pilot test.

The covid-19 pandemic stalled the effort, but it was resumed in April.

However, although the investigation into the legal status of the property in these settlements has been completed, the final report has not been released.

“The final report of those inspections has been requested and the ILP has not delivered it to us, the communities or Fespad, as applicants together with Movitierra,” said Hernández. 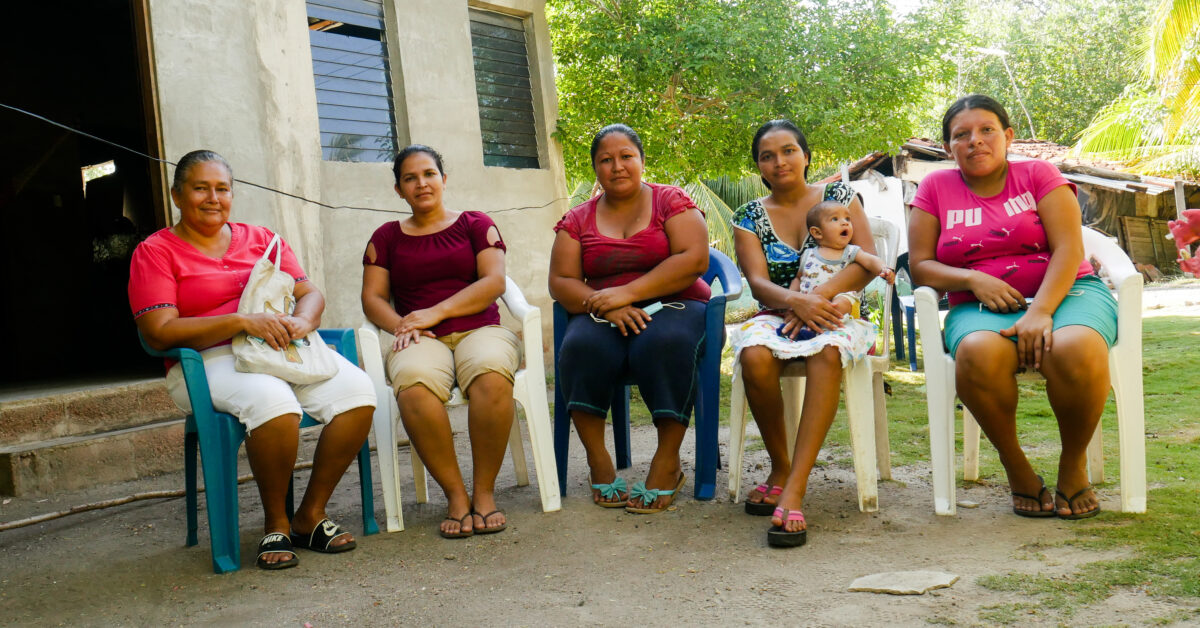 A group of women from the community of El Mozote, on the Salvadoran coast, express their concern about the uncertainty of not knowing if they will be evicted from their homes built on a plot of land claimed by a real estate company. They are asking the authorities to carry out a complete survey of the land. CREDIT: Edgardo Ayala/IPS

Threats of eviction, which in some cases have already materialized, are based on the argument that the poor families do not have property titles, while the companies and wealthy families claim to possess them.

These sectors claim part of the land where poor people live, many of whom work in the hotels or in the vacation homes of the opulent families who generally sail their yachts in the estuary.

“There was a hole here, and with the pennies I earned, I filled it in and made my champita (hut) covered with coconut and banana palm leaves,” Martínez told IPS, while taking care of his son in the wheelchair.

On a visit to the area by IPS, the affected families in Cuatro Vientos said the threats come mainly from the private Banco Agrícola, one of the most important banks in the country.

According to the families, the bank owns a plot of land about a block and a half in size – approximately one hectare – where several families built their houses two decades ago believing that it was abandoned land, which is common in the area.

These plots had owners decades ago, but for one reason or another were no longer used and over time became overgrown by weeds.

Now the bank has reportedly found a buyer and wants to remove the families living on that specific plot.

“We did not come to this land to take advantage of anybody, but out of need. I had nowhere to live,” said Martinez, whose small house stands on the disputed land.

According to some estimates, El Salvador has a housing deficit of 1.3 million homes. 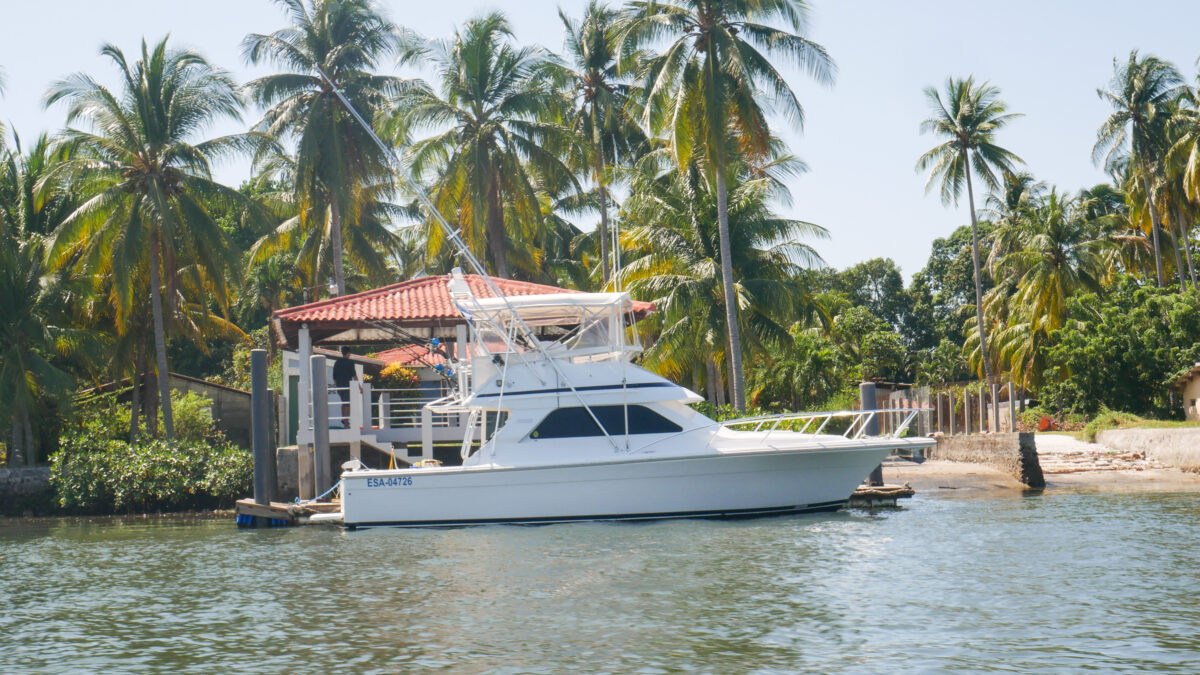 Along El Salvador’s Costa del Sol the ostentatious wealth of families who own beach houses and yachts moored at the docks stands in sharp contrast with the poverty of hundreds of families who have built shacks in areas that were considered state property and from which companies and families now want to evict them. CREDIT: Edgardo Ayala/IPS

Several families in Cuatro Vientos met with IPS to explain how the situation affects them.

They live with the uncertainty of not knowing when they may be forced by the police to leave their homes, which took them so much effort and sacrifice to build.

“I have sleepless nights, my eye twitches, I have nightmares, I’m so worried,” Alba Díaz told IPS.

Diaz, 48, is a single mother raising three teenage sons and a daughter without many job opportunities. She manages to earn a living by going to take care of her mother and grandfather, for which an uncle pays her 100 dollars a month. She also sells pizzas from time to time.

“We are threatened by the bank, they want to take back the property and sell it, we don’t know exactly,” she added.

But that’s not all.

The bank also seems to be interested in seizing other areas outside the land it owns, plots of land where other families live.

Those affected in Cuatro Vientos mentioned a strange situation in which police officers wearing masks showed up in July accompanying two people who told some families that they were there on behalf of the government to carry out a census.

The two people, who they said were probably representatives of the bank, collected personal identity document numbers, they added.

“I ran, but I couldn’t find them. I asked myself: Masks? Masked policemen don’t come to conduct a census,” said Diaz.

Francisco Martinez’s wife Gloria García confirmed that the hooded men and the two other people came to their house.

“They came here, who knows why. We gave them our identify document numbers and signatures. We don’t know if they came from the bank or from where,” Garcia said.

On Nov. 16, the Banco Agrícola sent an official statement of its position in an e-mail to IPS.

“It is important to clarify that, as an agricultural bank, no eviction action is being considered or planned for the inhabitants of the Cuatro Vientos community,” it stated.

The bank confirmed a day later that it did own a piece of land there since June 2000, but that it sold it in March 2021 and that the property is currently in the process of being registered in the name of the new owner. The bank also denied that any of its representatives had visited the community.

Meanwhile, in another community located on the Costa del Sol strip, El Mozote, some 125 families are also living in uncertainty and threatened with eviction, because a real estate company is trying to evict them, claiming to be the owner of the land.

“They are State lands, we have cadastral records that say they are State lands, but when people clear them and fix them up, others want to take them over,” one of the residents, Mélida Alvarado, an activist in the collective struggle against eviction, told IPS.