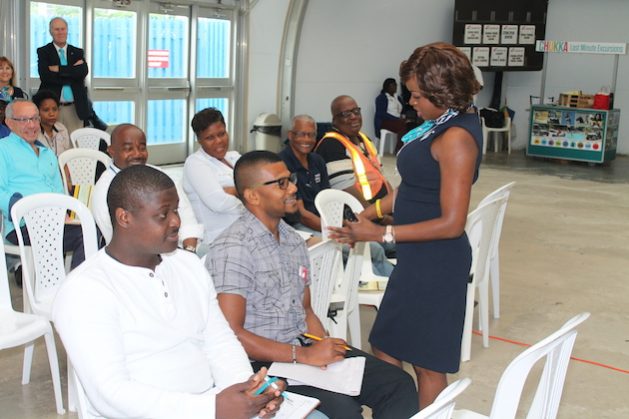 Trafficking survivor turned activist, and consultant Shamere McKenzie trains authorities and mentors survivors. The use of technology and awareness of how to spot and avoid traps used by human traffickers. Credit: Zadie Neufville/IPS

Kingston, Jan 31 2022 (IPS) - A single line at the end of the United States State Department 2021 Trafficking in Persons Report made headlines in Jamaica and had many perturbed. “Some police allegedly facilitated or participated in sex trafficking,” it read.

While the report cited no incidents, investigations, or police officers’ convictions for sex trafficking, Jamaicans on social media called for investigations. People cited the increasing levels of sexual abuse reported during the COVID-19 pandemic as justification.

US authorities have categorised Jamaica as “a source, transit, and destination country for adults and children trafficked for sexual exploitation and forced labour”.

Manager of the Trafficking in Persons (TiP) Secretariat Chenee Russell Robinson told journalists recently that more than 110 victims of sex trafficking were rescued in the last ten years. At an average of ten per year, she believes the number is far too high “because this number represents only the tip of the iceberg”.

Some matters are before the court, and investigations into other activities were ongoing, noting that while girls make up the majority of sex trafficking victims, there are a growing number of boys, too, she said.

Between 2015 and 2019, the number of teens reported missing on the island averaged approximately 1,400 a year, data from the Child Protection and Family Services Agency shows. With numbers increasing annually and the figures for those returning home or recovered declining, the spectre of a rising sex trafficking trade is becoming one of the biggest worries for local authorities.

Child protection activists believe that most missing children who do not return home are victims of sex trafficking. Here, it is not uncommon for families, including mothers, to traffic their girl children in exchange for monetary or material payment, police say. This form of child sex trafficking may be more widespread in some communities.

Experts say that children who are sent by their parents to live with their more affluent relatives in urban areas regularly become victims. And according to the State Department report: “Sex trafficking of Jamaican women and children, including boys, occurs on streets and in nightclubs, bars, massage parlours, hotels and private homes, and resort towns”.

So, while the report commends Jamaica for its strides and multi-agency approach to combatting human trafficking, it scolds the government for reduced spending, a fall-off in apprehension and training. It also criticised the absence of “long-term services to support victims’ reintegration, prevent re-exploitation, or sustain protection throughout lengthy court cases”.

The report noted that Jamaica “does not fully meet the minimum standards for the elimination of trafficking but is making significant efforts to do so.” These efforts included a trafficking conviction with significant prison terms and restitution paid to the victim, a national referral mechanism that aims to standardise procedures for victim identification, referral to cross-government entities services and an annual report.

Significantly, authorities hold up several improvements The Trafficking in Persons (Prevention, Suppression and Punishment) Act, first enacted in 2007. Amendments speed up the prosecution of cases by introducing bench trials and increasing the penalties.

On July 9, 2013, the government amended the Act to increase incarceration periods to 20 years. The 2021 amendments removed the alternate and often controversial fine in place of imprisonment.

“Now a person convicted of trafficking can only be imprisoned or imprisoned and fined, so you cannot be fined only,” Russell explained.

Trafficking survivor turned activist, and consultant Shamere McKenzie told IPS in an interview that community awareness, involvement, and the use of technology to enhance the safety of possible victims could be the tools that tip Jamaica into Tier 1.

“There’s a lot we can do as a community to help our young people shape their morals and values and build their sense of awareness,” she said, noting that traffickers can recognise people with low self-esteem.

Since 2016 authorities have funded the development of two apps – Stay Alert and Travel Plan – to make it safer for especially young girls and women who use public transport. McKenzie believes communities and parents must learn to use technologies to keep their children safe.

A former student-athlete, she was lured by someone she thought was a caring friend into 18-months of living hell. Sidelined by a serious hamstring injury, the young Jamaican’s athletics scholarship to a top United States university was suspended. She was forced to work for the extra money she needed for school fees and rent when she accepted a friend’s help.

The short-term offer of a rent-free basement apartment and ‘extra work’ at the trafficker’s nightclub turned into forced sex work after being beaten into submission by a man she believed to be her friend.

While this episode took place in the US, it is not uncommon for Jamaicans and foreigners to be lured young women into prostitution by offering them jobs or simply ’a better life’.

The fisherman had met the girl’s father on one of his many trips to Haiti and had convinced him to send her to Jamaica for a better life. Three years after the ordeal began, police rescued the teen from Ebanks and Reeve’s home, where she had been looking after the couple’s children.

As the pandemic progresses, Robinson and other members of the Traffic in Persons (TiP) task force warn parents that traffickers have gone online, making it more difficult to track them. They’ve also warned teens and their parents that families are also trafficking their relatives.

The 110 rescued by the TiP task force are among the .04 per cent of the estimated human trafficking survivors worldwide identified. The number is an indicator that most go undetected.

Experts conclude that assessing the scope of human trafficking is difficult because many cases go undetected. However, estimates are between 20 million and 40 million people n modern slavery today earn the perpetrators roughly 150 billion US dollars annually. Some 99 billion US dollars comes from commercial sexual exploitation.

“We must begin to teach our youth to use the technology we have to protect themselves,” McKenzie said.

This article is part of a series of features from across the globe on human trafficking. IPS coverage is supported by the Airways Aviation Group.
The Global Sustainability Network ( GSN )  is pursuing the United Nations Sustainable Development Goal number 8 with a special emphasis on Goal 8.7, which ‘takes immediate and effective measures to eradicate forced labour, end modern slavery and human trafficking and secure the prohibition and elimination of the worst forms of child labour, including recruitment and use of child soldiers, and by 2025 end child labour in all its forms’.
The origins of the GSN come from the endeavours of the Joint Declaration of Religious Leaders signed on 2 December 2014. Religious leaders of various faiths gathered to work together “to defend the dignity and freedom of the human being against the extreme forms of the globalization of indifference, such as exploitation, forced labour, prostitution, human trafficking”.