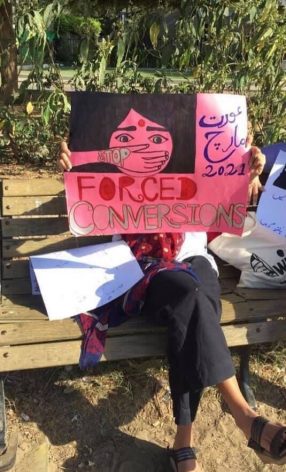 KARACHI, Jan 19 2022 (IPS) - Two years after Michelle, 15, was kidnapped, sold, forced to convert to Islam and married to a stranger, relatives still ostracise her.

“My aunts and uncles have left us, and my two older brothers, till a few months ago, were not even talking to me,” said Michelle, talking to IPS over the phone from Faisalabad, in the Punjab province of Pakistan. They believe she has brought dishonour to them.

Her captors and even the cleric who officiated the marriage are free despite committing multiple offences, including abduction, trafficking and rape.

“There are several laws that can be invoked for tackling offences, such as kidnapping and abductions,” lamented Peter Jacob, executive director of the Center for Social Justice (CSJ), a research and advocacy organisation. “But the prosecution has failed to do so.”

Most of the young, female victims belong to the Christian (in Punjab) and Hindu (in Sindh) minorities and followed the same pattern. 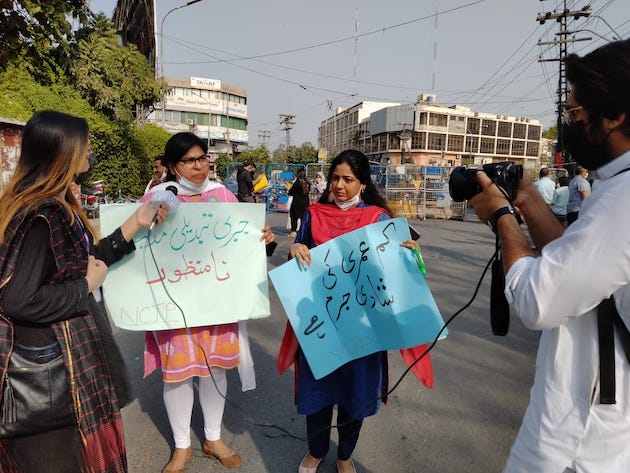 Experts and activists demand legislation to prevent ‘forced conversions’ that are often associated with human trafficking, abduction and rape. The white poster on the left says: ‘Forced conversion unacceptable’. The blue poster says: ‘Underage marriage is a crime’. Credit: NCJP.

“This year, at least 62 such cases have been reported,” he told IPS over the phone from the eastern city of Lahore, in the Punjab province.

In the predominantly Muslim nation of 220 million people, the Christians and Hindus in Pakistan are estimated to be 1.27% and 2.14%, respectively, according to the 2017 census.

“The victim’s family is hesitant to approach the police because of their harsh attitude,” she said.

“The affected family is diffident to report the crime because of the repercussions from the powerful and influential another side.”

Moreover, Khokhar said, the road to justice was tedious and complicated, but it was also expensive and often beyond their means.

In a majority of the cases, the adolescent girls from Hindu communities are uneducated, belong to poor families and are “surrounded by misogyny and patriarchy,” she said.

However, the reason for the conversion of educated Hindu girls belonging to well-off families was different. They want to seek escape from being forced into marrying uneducated Hindu men from their community. The only way out is for them is to convert to Islam.

Khokhar, who has been studying this issue for over a decade, believed that sensitisation was one way of overcoming the issue since societal prejudices remained the most significant barrier. This should include the clerics who officiate the nikah (the ceremony where the couple is legally wed under Islamic law), the investigating officers working on such cases and the district administration.

According to Vankwani, many parliamentarians concede the issue persists, but it is not as rampant as to be of concern.

“I say, even if it’s just one person who is forcibly converted, it becomes our responsibility to stop this practise through legislation,” he says.

Over the years, there have been several attempts to regulate conversions through legislative means without success.

In 2019, the Sindh assembly, for the second time, rejected a bill criminalising forced religious conversions. The first attempt was in 2016. 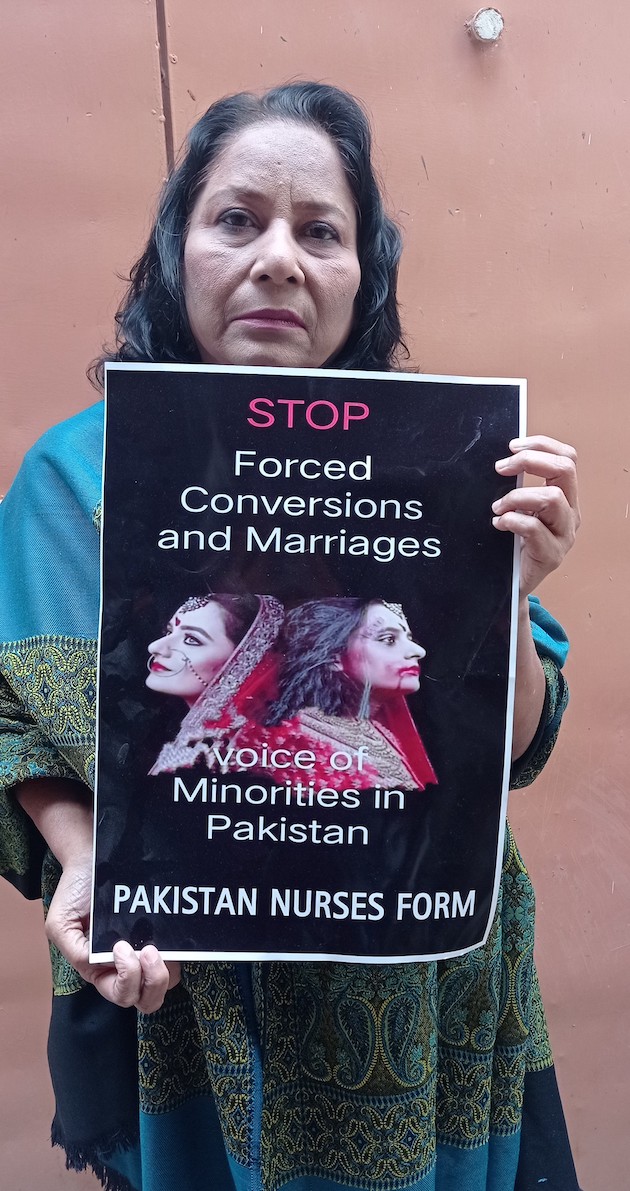 In 2020, the Standing Committee on Religious Affairs and Interfaith Harmony had rejected the Protection of Rights of Minorities Bill, 2020, which recommended an age limit of 18 years for conversion.

The parliamentary committee shot down a draft of yet another anti-forced conversion bill opposed earlier in the year by the ministry of religious affairs even before it could be tabled in the national assembly.

The excuse made by the minister for religious affairs, Noorul Haq Qadri, was the “unfavourable” environment.

According to political and integrity risk analyst Huma Yusuf, the current “social, religious and political environment” was too oppressive in a Talibanized Pakistan for the law to find favour from any quarter.

“A key problem is that the term ‘forced conversion’ glosses over what’s really at stake. Reportedly, some 1,000 girls from religious minorities, primarily Hindus, are forced to convert each year,” Yusuf says.

“These conversions can involve abduction, rape, violence, human trafficking and extortion. They also enrich clerics who receive payments for solemnising such marriages, corrupt police officials who take bribes instead of investigating, and magistrates who look the other way. By rejecting the bill, our lawmakers are condoning these other activities. How does this serve Islam?”

The reasons for rejecting the most recent bill by the ministry and the parliamentary committee were the minimum age (set to be 18 years) kept for converting to another religion, a 90-day contemplation period before conversion and testifying before a judge.

The bill stated that the “age will be ascertained based on the child’s birth certificate, school enrolment certificate, or the official database. In the absence of all, the person’s age may be determined through a medical examination”.

“There are about 20 laws that place some or the other restrictions on a person below 18 years of age,” pointed out Jacob, including getting a driver’s license, voting or seeking employment.

“These are reasonable restrictions and enhance the scope of freedoms and protect the rights in those specific areas.”

He also found the 90-day contemplation period logical for a “matter that is individually and socially important and should not be dealt with casually or hastily”.

Further, says Jacob, testifying before a judge eliminates the possibility of covering the crime of kidnapping by marriage and will ensure that conversion is not under any duress, deceit, threat or fraudulent misrepresentation.

Terming the bill a “dam” that was drafted to “restrain the spread of Islam,” Pir Abdul Khaliq, 66, who heads the century-old madressa Ahya Darul Uloom, in Dharki, in Sindh province’s Ghotki district, was happy it was “rejected”.

This madressa (a “hotbed” for alleged conversions), next to the shrine of Khanqah-i-Aalia Qadria Bharchundi Sharif, has a chain of nearly 200 seminaries spread across Sindh (140), Punjab (30) and almost two dozen in Balochistan.

Since he took over the reins of the seminary from his father 50 years ago, he says, he has converted scores of men and women of their “free will”. Talking to IPS over the phone from Dharki, he conceded he was among those who had threatened the ministry that his followers would “come on the streets and hold protests” if the bill was passed.

Having converted entire families, “from 80-year-olds to some as young as eight”, he says no one ever objected to that, so why the need for a law.

“If an underage child converts alongside the parents or guardians, there is no objection,” responded Khokhar. The objection raised was of the conversion of single adolescents like Michelle.

“Why are they never elderly women, why do they have to flee to another city to convert and why are the parents not allowed to meet them?” she asked.

“There is no age to conversion,” responded Khaliq, but insisted he “respected the age of marriage”, which is 18 in Sindh.

However, many underage Hindu girls from Sindh are taken to Punjab, where the legal age of marriage is 16, says Khokhar. She believes it would help halt forced conversion if the age restriction of 18 years for conversion and marriage was “enforced uniformly” throughout the country.

In 2019, two Hindu sisters, Raveena and Reena, made headlines by going to the court seeking protection from their family, saying they had wilfully accepted Islam. The family insisted they were abducted.

However, the court allowed the sisters to go to their husbands but sent a five-member fact-finding team to ascertain this was not a forced conversion.

The report recommended religious conversion be carried out through a “proper process and be formalised or registered in a court of law”.

At times, says Khaliq, girls eloped and converted to Islam because they had fallen in love with Muslim men and “not for the love of religion”.

In that case, says the cleric, the woman is given “a day or two to think over her decision”. But if she still insists on conversion, he performs the ceremony. “Marriage between a Muslim and Hindu is not permissible in Islam,” he says, and so she converts.

He also pointed out that there are times the woman realises she has made a wrong judgement, but after having fled her parent’s home, the chances of her being accepted by her family are very slim on her return.

“She has little recourse but to follow the original plan of converting to Islam”.

However, he reiterated, his seminary would not perform the nikah if the girl was underage.

Responding to Khokhar’s query of moving to another city to convert, Khaliq explains: “Once the girl elopes with the man and the parents go to the police, many forces come into play, including the feudal lord of the area and the police. Fearful of their life, their first thought is to find a safe place.”

If it were passed, the bill would have effectively addressed this issue by restricting the person applying for a conversion certificate to get it issued from the judge of the area where the non-Muslim resided, says Jacob.

He, however, refuses to let the rejection dampen his spirit. “We have no other option but to fight taking the legal route to ensure a fixed process for conversion is followed,” says Jacob.

Along with Dr Vankwani, he is working with the Council of Islamic Ideology (tasked with giving legal advice on Islamic issues to the government and the parliament) to develop a draft bill that would be acceptable to all faiths.

This article is part of a series of features from across the globe on human trafficking. IPS coverage is supported by the Airways Aviation Group.

The Global Sustainability Network ( GSN ) is pursuing the United Nations Sustainable Development Goal number 8 with a special emphasis on Goal 8.7, which ‘takes immediate and effective measures to eradicate forced labour, end modern slavery and human trafficking and secure the prohibition and elimination of the worst forms of child labour, including recruitment and use of child soldiers, and by 2025 end child labour in all its forms’.
The origins of the GSN come from the endeavours of the Joint Declaration of Religious Leaders signed on 2 December 2014. Religious leaders of various faiths gathered to work together “to defend the dignity and freedom of the human being against the extreme forms of the globalization of indifference, such as exploitation, forced labour, prostitution, human trafficking”.