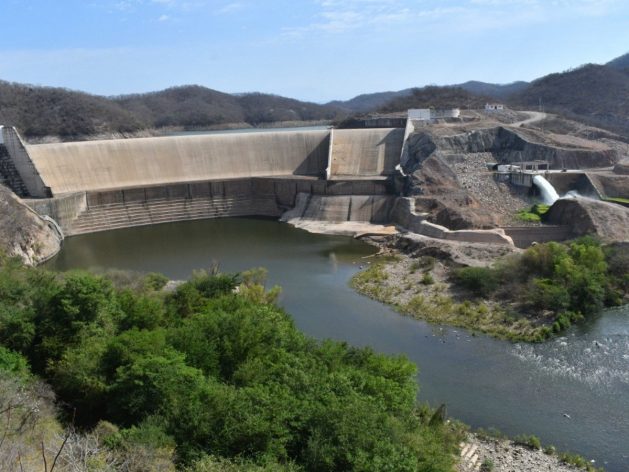 With a storage capacity of 580 million cubic meters and an irrigation target of 22,500 hectares, the Picachos dam in the state of Sinaloa, in northwestern Mexico, will also generate 15 megawatts of electricity. CREDIT: Conagua

MEXICO CITY, Feb 7 2022 (IPS) - The Mexican government is prioritizing the construction and modernization of mega water projects, without considering their impacts and long-term viability, according to a number of experts and activists.

Dams, reservoirs, canals and aqueducts are part of the new infrastructure aimed at ensuring water supply in areas facing shortages, but without addressing underlying problems such as waste, leaks, pollution and the impact of the climate crisis, like droughts.

One of the flagship projects is Agua Saludable para la Laguna (ASL), which will serve five municipalities in the northern state of Coahuila and four in the neighboring region of Durango, benefiting 1.6 million people.

Gerardo Jiménez, a member of the non-governmental Encuentro Ciudadano Lagunero – an umbrella group made up of 12 organizations of people from local communities – said the ASL initiative launched in 2020 neglects the structural causes of the water crisis, water pollution and the overexploitation of water sources.

“It focuses on effects, shortages and pollution. It is designed for a 25-year period and is based on a vulnerable source. There is illegal water extraction and contraband. It does not provide alternative solutions,” he told IPS from the city of Torreón.

Five of the eight aquifers in the area that provide water are overexploited. The Principal-Región Lagunera is the most important, supplying four cities.

The reservoir becomes cyclically deficient, as its annual extraction exceeds its recharge. In addition, the water contains arsenic above the limits established by Mexican regulations and the World Health Organization (WHO).

ASL includes the construction of a water treatment plant, with a capacity of 6.34 cubic meters (m3) per second, a diversion channel and an aqueduct to transport 200 million m3 per year from the Nazas River.

At a cost of 485 million dollars, the project is part of a network of new water infrastructure promoted by the National Water Commission (Conagua), Mexico’s water regulatory agency, several of which are being challenged by social organizations and communities, in some cases through the courts.

It will start operations in 2023 and will also harness runoff from the Francisco Zarco reservoir, popularly known as Las Tórtolas, and the Lázaro Cárdenas reservoir, known as El Palmito.

These reservoirs could reduce their water supply due to the drought that has affected the area in recent years. The lack of rain is plaguing half of Coahuila, a situation set to worsen in the coming months with the arrival of the dry season.

Both dams are almost overflowing at present, but that level should change when the dry season starts.

Mexico, a country of nearly 129 million people, is highly vulnerable to the effects of the climate emergency, such as droughts, intense storms, floods, and rising temperatures and sea levels. While the south and southeast have water in excess, people in the center to the north face water shortages.

This Latin American nation has a high risk of water stress, according to the Aqueduct water risk atlas of the Aqueduct Alliance, a coalition of governments, companies and foundations. In fact, Mexico is the second most water-stressed country in the Americas, only behind Chile. 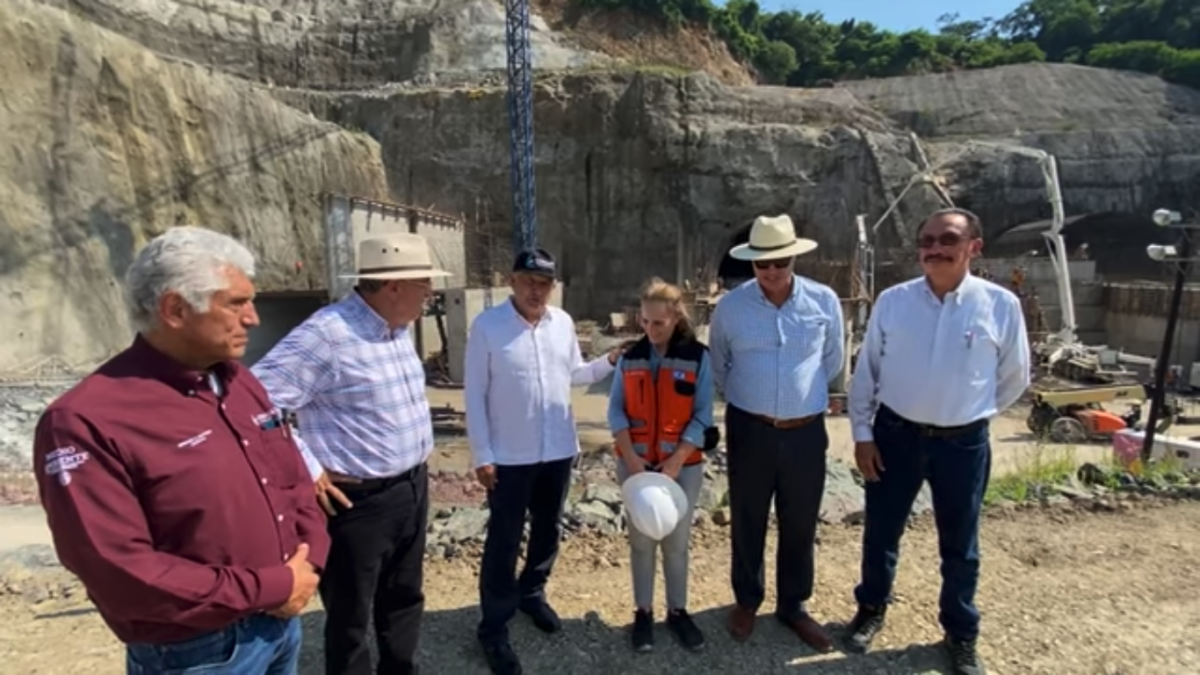 Another key project is the Libertad Dam, whose construction began in 2020 and is scheduled to be completed in 2023, with 132 million dollars in financing. Designed to take advantage of runoff from the Potosí River, the reservoir will provide 1.5 m3/s to meet demand in 24 of the 51 municipalities in the northeastern state of Nuevo León, serving 4.8 million people.

Aldo Ramírez, a researcher at the private Instituto Tecnológico y de Estudios Superiores de Monterrey, said large infrastructure and environmentally friendly works should coexist, as they make different contributions, based on a vision of urban development with an adequate hydrological focus.

“Both approaches have their advantages in certain niches,” he told IPS from Monterrey, the state capital. “When we think about water management in cities, many years ago the focus was on removing the water as quickly as possible so that it wouldn’t cause problems. Green infrastructure can help a lot, it has great environmental value, in water management and aquifer recharge.”

Like other areas of the country, Monterrey and its outlying neighborhoods, made up of 13 municipalities and inhabited by more than five million people, depends on the supply of water from the El Cuchillo, Rodrigo Gómez or La Boca and Cerro Prieto dams. The first holds half of its capacity, while the other two barely store any water, according to Conagua data.

Through a presidential decree published in November, President Andrés Manuel López Obrador classified projects that he considers to be of public interest and of national security as high priority and/or strategic for national development.

Among them are hydraulic and water projects, which will receive provisional express permits, in a measure questioned by environmental organizations due to the violation of impact evaluation procedures.

ASL, for example, still faces a challenge filed by the Encuentro Ciudadano Lagunero, while five others were withdrawn after agreeing with the government to review the project. But if this agreement is not respected, the threat of legal action remains.

Northwest Mexico faces a similar situation to the other regions in crisis and the government is building two reservoirs and a canal, and upgrading an aqueduct.

In the state of Sinaloa, construction of the Santa María dam on the Baluarte River is moving ahead and it should also be completed in 2023, to irrigate 24,250 hectares in two municipalities. In addition, it will generate 30 megawatts (MW) of electricity, with an investment of almost one billion dollars.

The Picachos dam is also undergoing modernization, with the installation of turbines to generate 15 MW of electricity and the irrigation of 22,500 hectares. With a storage capacity of 580 million m3, it holds 322 million m3 and will cost about 136 million dollars.

To the south, in the state of Nayarit, the 58-kilometer-long Centenario Canal, with a capacity of 60 m3/s, is being built to irrigate 43,105 hectares in four municipalities. With an investment of 437 million dollars, it will serve some 7,500 farmers with water from the El Jileño and Aguamilpa reservoirs, supplied by the Santiago River.

In addition, the government agreed with opponents of the El Zapotillo dam, in the western state of Jalisco, to leave the dam at a height of 80 meters and operate at 50 percent capacity, so as not to flood three towns, in order for the project, worth some 340 million dollars and with a capacity of 411 million m3, to start operating.

But the construction of new dams has ecological repercussions, such as the modification of the landscape, the generation of methane and the displacement of people, as evidenced by several recent scientific studies.

In the northern city of Tijuana, on the border with the United States, the government is upgrading the Río Colorado-Tijuana aqueduct, which transfers water from the Colorado River, shared by both countries, to meet urban and agricultural demand in the area, at a cost of 47 million dollars.

Jiménez, of the Encuentro Ciudadano Lagunero, calls for the regulation of the extraction of water from the Lázaro Cárdenas reservoir on the Nazas River, as well as from the wells, a more precise extraction measurement system, a fight against illegal concession trafficking and the maintenance of the urban water distribution network.

In his opinion, “this situation anticipates recurring crises. If it is not addressed, it will worsen, and it is not necessary to reach that crisis.”

But, in the midst of this complex scenario, he warned of the lack of political decision to change the country’s water policy. “The human right to water is not being fulfilled here,” he said.

Ramirez the researcher highlighted measures underway, such as pressure management to reduce leaks, the review of wells assigned to industry, the reuse of treated wastewater and demand management.

“We need to make more efficient use of water. We still have a margin of consumption, but we need to come up with more environmentally friendly solutions. We are heading towards a water crisis,” he said.