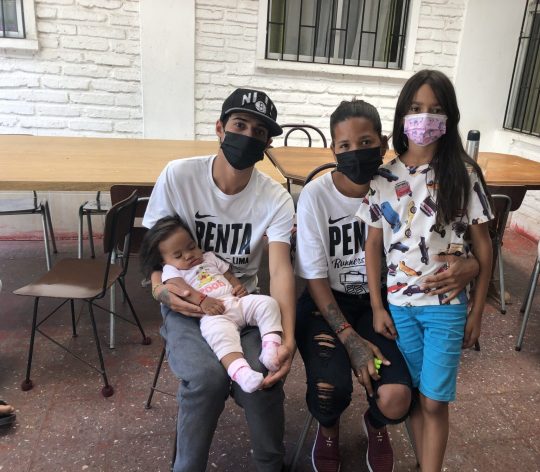 Yenire (27) and Leonardo (23), together with their children Yeimar (10) and Yemberlin (1), came from Caracas where Leonardo worked sporadically with Loro, his 74-year-old carpenter grandfather. "We went through Colombia, Ecuador, Peru and Bolivia. I didn't know it was this difficult to migrate. I lived with my family. Even though it was a difficult country, I was able to support myself. Now I value things a lot," said Leonardo. Venezuelan migrants travel long distances on foot, sometimes through different countries and with few belongings, in search of a place to settle. CREDIT: Orlando Milesi/IPS

SANTIAGO, Feb 23 2022 (IPS) - The failure of Chile’s immigration policy, with its toll of deaths, xenophobic sentiments but also shows of solidarity, will be a pressing matter for the incoming administration of Gabriel Boric, who takes office on Mar. 11, and for the drafters of the new constitution, who will include the issue in the text that is to be ready in July.

Twenty-year-old Brenda, who is 38 weeks pregnant, Jaiden, 23, and their young son are a Venezuelan family who arrived in Santiago on Feb. 3 in one of four buses from the port of Iquique, 1800 kilometers north of Santiago. They came with 200 other migrants who crossed through the Colchane border post from Bolivia without visas.

“The only thing I want is a job to pay our expenses,” Jaiden said at the time. Eleven days later, Brenda delivered her baby in a Santiago hospital while Jaiden traveled to the town of Melipilla, 68 kilometers southwest of the Chilean capital, on his first day of agricultural work.

The death of 19 migrants in 2021 and three so far in 2022 while trying to reach the town of Colchane highlights the risk of a journey where they face a “Bolivian winter” with rain and sub-zero temperatures.

The influx from Bolivia – estimated at between 600 and 1000 immigrants per day in January by Colchane’s mayor, Javier García – overwhelmed the small town of 1,384 inhabitants, located at an altitude of 3,600 meters in the Andes mountains.

There has also been a rise in xenophobic reactions. In September, in the northern port city of Iquique, demonstrators set fire to tents and personal belongings in a camp where migrants were staying.

“We were there, it was terrible,” said Yenire, 27. She and Leonardo, 23, are originally from Caracas and they have two children, 10-year-old Yeimar and one-year-old Yemberlin. In Iquique, Yenire, who was two months pregnant, had a miscarriage, she told IPS.

Tensions flared again on Feb. 10 when a truck driver died at the intersection of the highways linking the northern city of Antofagasta and the city of Mejillones, allegedly at the hands of three migrants. The incident led to a strike and road blockade that lasted several days. Protesters held banners and signs demanding that the borders be closed to immigrants.

On Feb. 12 the outgoing government of right-wing President Sebastián Piñera published an immigration law that replaced the one in force since 1975, during the dictatorship of General Augusto Pinochet (1973-1990).

“The State must push for safe migration, manifested in actions aimed at preventing, combating and punishing the smuggling of migrants and trafficking in persons,” states the law, which gives greater powers to the government and the courts to deport those who enter the country through unregulated border crossings. 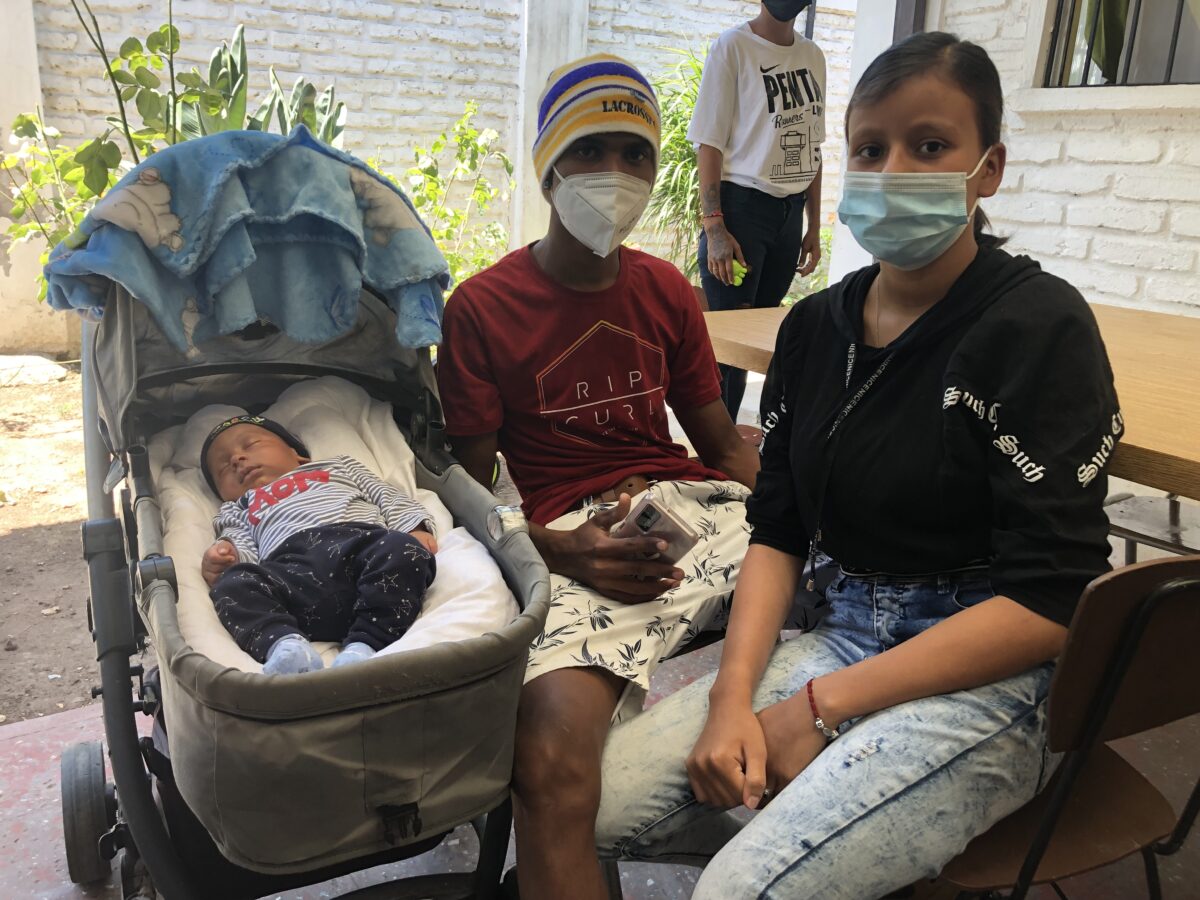 Jana (16) and Diego (18) are the parents of Diosmar, who was born on Jan. 13, 2022 at the San Juan de Dios hospital in Santiago de Chile. They are temporarily staying at the Ward Foundation shelter in Estación Central, a municipality in the western part of the capital. “I received very good care at the hospital and at no cost,” said Jana whose son is registered in the Civil Registry. The couple could not register as undocumented immigrants, necessary to initiate the procedures to apply for residency, because they are minors. CREDIT: Orlando Milesi/IPS

Interior Minister Rodrigo Delgado announced that the mass deportations would continue: “We have at least one flight scheduled between now and Mar. 11 and it will take place specifically in the northern zone, carrying people detained in these operations that we are conducting.”

The worsening climate for immigrants in Chile was reflected by Venezuelan journalist Lorena Tasca, a professor at the University of Chile, in Santiago, who said: “I no longer feel at ease as a foreigner in Chile.”

Tasca, who arrived in 2014, wrote that she feels “very ashamed of how the Chilean media has handled the issue in recent years. My stomach clenches and I avoid news about migration or homicides and/or robberies involving foreigners.”

This environment puts pressure on the future president, the leftist Boric, who during his campaign announced “a policy for regular, orderly and safe migration, aligned with international agreements, that recognizes the benefits of interculturality and promotes true inclusion and recognition of migrants and refugees in society.”

Luis Eduardo Thayer, a researcher at the Silva Henríquez Catholic University who was a member of Boric’s campaign team, said “the first thing will be to recover control of information and the border, which are two very weakened issues.”

“We don’t know how many migrants have entered, who they are, what their situation is, their background or if they have relatives here,” he told IPS.

“The situation has to be urgently rectified, to enable temporary entry. Some can be regularized, others cannot because they have a criminal record or have committed crimes,” he said.

Thayer said “the issues faced by local territories must be addressed to resolve tensions and conflicts in the places where migrants arrive or transit.” He also proposed “rational management of migration that takes the labor market into consideration.”

“Today the market operates by supply and demand, but this does not work because people have no information, no offers, no networks. We have to do what they do in Brazil, Spain or Canada, which combine migration with the labor market,” he said.

In addition, he remarked, “the protection of children and refugees must be a priority.”

Chile increasingly became a destination for migrants from other countries in the region starting in 1993. They began arriving from Peru and later from Bolivia, Ecuador, Colombia, Dominican Republic, Haiti and finally – and en masse – from Venezuela. 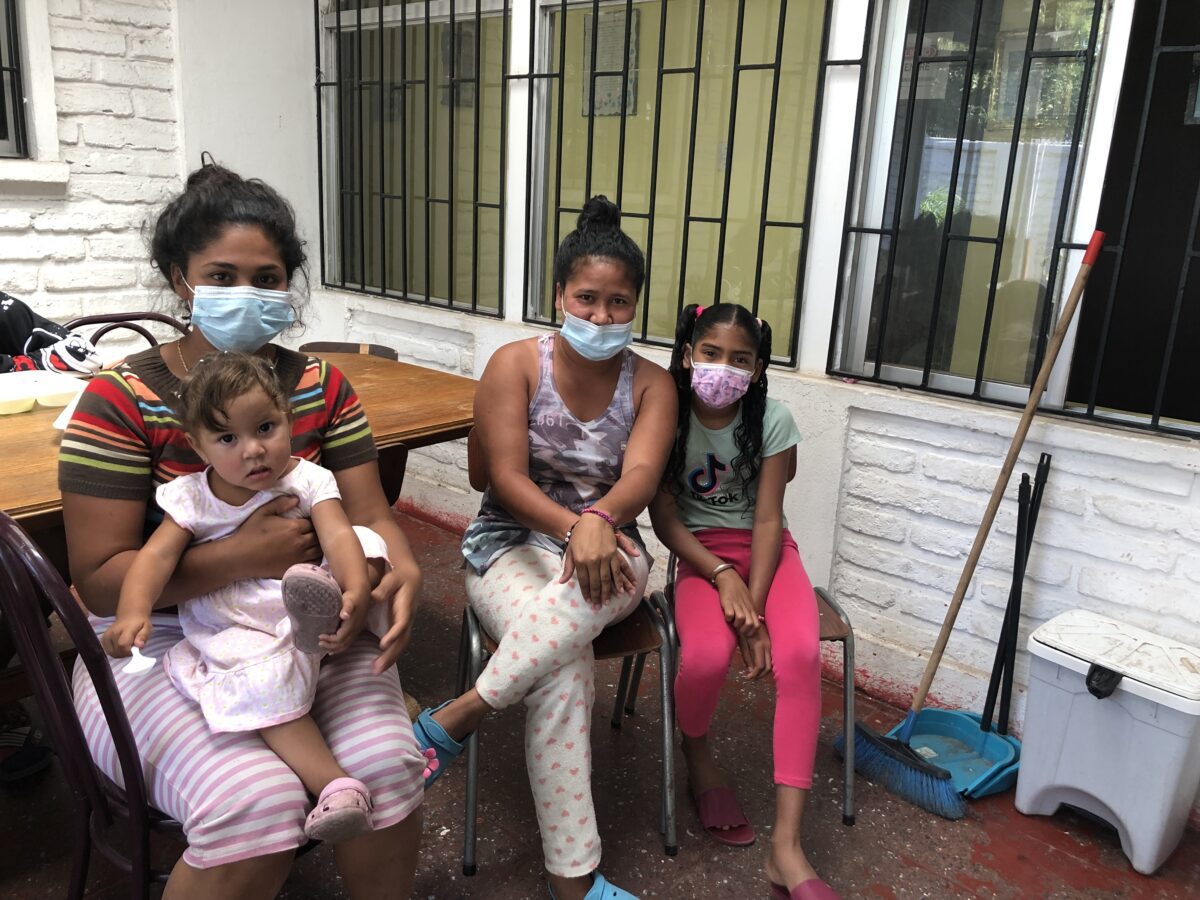 Egli Managua (26), originally from Caracas, is the mother of Norelis Pedríquez, (10), and Katerine Gutiérrez (22) originally from the city of Puerto La Cruz, “a beautiful place,” is the mother of Kalanis Marumar (1). They are cousins and travel companions of Brenda, who had her baby on Feb. 14 in Santiago. “It was a month and four days of hard travel. On Jan. 16 we entered the country through Colchane,” Managua said at a shelter where they are staying in the Chilean capital. CREDIT: Orlando Milesi/IPS

María Emilia Tijoux, a professor at the University of Chile’s School of Sociology, told IPS that “this is not a migration crisis but rather a crisis of migration policies.”

“Migrations could almost be called the new barbarism, because they imply a permanent punishment against thousands of people who move around the world, not only to Chile, but mainly to countries considered safer and more economically successful,” she said.

In her view, “migration policies worldwide are in crisis because it is a generalized displacement that is pulled by the strings of global capital. We are talking about cheap labor, mass expulsions for ecological reasons, wars, persecutions, political conflicts.”

Tijoux said “Venezuelan migrants come to Chile for different reasons. One was the invitation made by the president in Cúcuta,” a Colombian city bordering Venezuela, where Piñera offered “visas of democratic responsibility” for Venezuelans, in February 2019.

The Venezuelan exodus, mostly to other Latin American countries, became uncontainable since 2014, a year after the start of Nicolás Maduro’s government, according to data from the United Nations refugee agency, the UNHCR, which estimates that more than six million people have left the country since then.

“Then, since the 1990s, Chile began to be touted as a country that is supposed to be economically secure, with more work and possibilities for residence,” said the sociology professor.

Rodolfo Noriega, a Peruvian immigrant who is president of the Fundación Defensoría Migrante, told IPS that “visas should be granted so that people do not come as undocumented immigrants and children do not come clandestinely or through minefields to join their parents.”

“Fortunately, one path that the next administration seems to be preparing to take is regularization in combination with labor insertion,” said Noriega.

He said he expects the Boric administration “to be guided by principles….There will be dialogue and we will insist that the rights of migrants be respected. That is part of our struggle in the constitutional reform. What happens in the constituent assembly will be fundamental.” 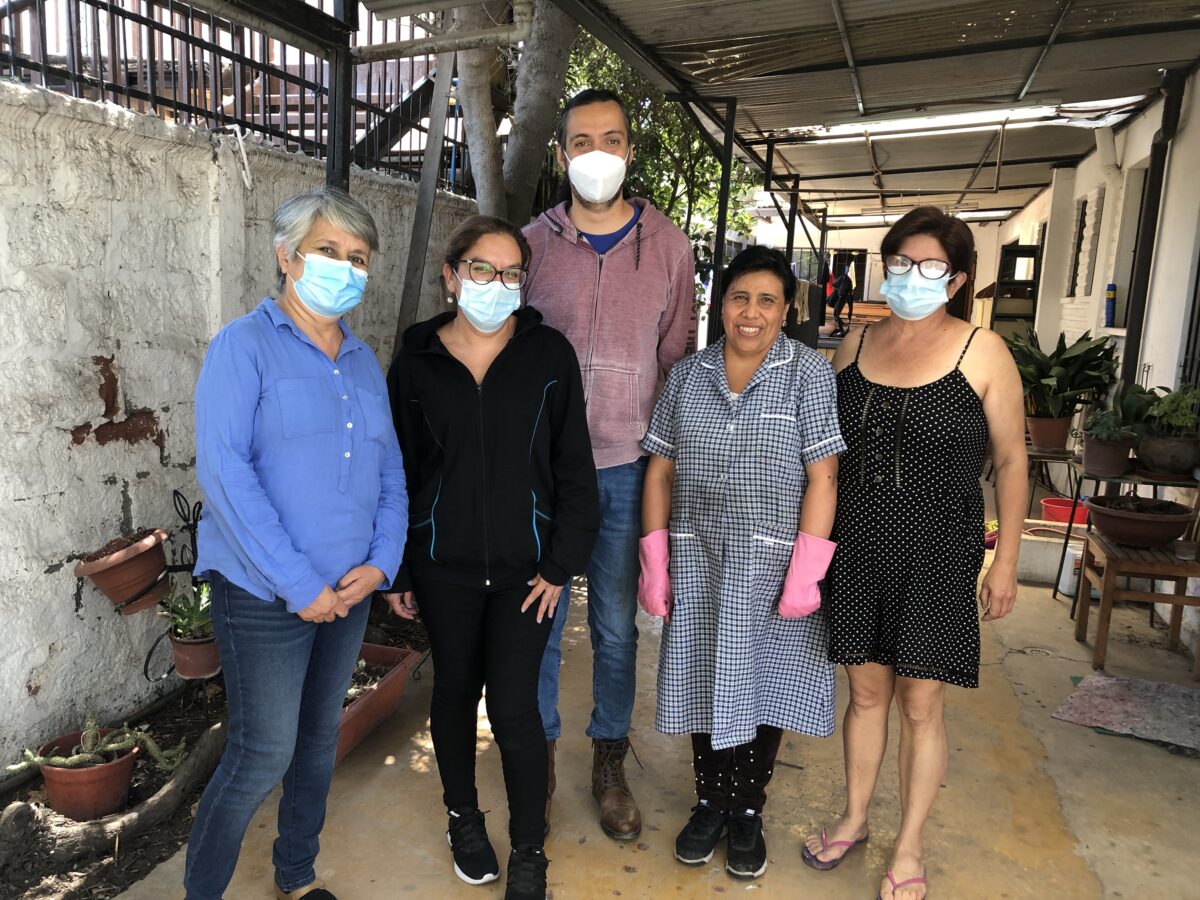 Mane, Daniela, Sebastián, Plácida and Cecilia are Chileans staffing a shift at the Ward Foundation’s shelter in Santiago de Chile, which serves Venezuelan migrants who can stay there for a month while they find a way to support themselves, a job or rented housing. They receive three meals a day and accommodation and assistance to register as undocumented immigrants and begin the paperwork to regularize their status. CREDIT: Orlando Milesi/IPS

The 154 members of the constituent assembly have the floor

On Jan. 27, several members of the Constitutional Convention, which will draft a new constitution to replace the one in force since the dictatorship, presented a “Migrant Agenda” to recognize and guarantee rights to all those living in Chile, “regardless of their nationality.”

The constituent assembly’s 154 members, half of whom are women and 17 of whom are representatives of indigenous peoples, were elected in a plebiscite in October 2020, and began their work on Jul. 4, 2021.

Most of them are progressive activists and leaders not linked to political parties, but to independent organizations and movements. They have until Jul. 4 to draft the new constitution, which will be endorsed or rejected by voters later this year in a referendum.

One of the promoters of the initiative on migrants, Benito Baranda, told IPS that “the right to asylum, which is in our legislation but not in our constitution, and the right to migration, that people must be welcomed in a dignified manner, must be taken into consideration in the constitution.”

“Last year only seven people were granted asylum while, given the situation of those leaving Venezuela, it is most likely that the requirements for asylum were met by a large number of the applicants. The government has been resistant,” he said.

He proposed recognition of a third principle: “That if you are born in Chile you are not stateless.”

According to Baranda, there is a “favorable” opinion among the constituents regarding these reforms.

“We will get support from two thirds of the members and then we will have to work with the community to get them to understand the substance and vote to endorse the constitution,” he added.

Tijoux said “the refusal to regularize leads to many problems, among them that people are left stranded and without rights. Our concern is for families with children, for pregnant women, in extremely precarious and in some cases subhuman conditions.

“There are thousands of migrants working in Chile, paying their taxes. But they suffer from xenophobia and racism that negatively target their origins, color, economic condition, nationality. Because of the negative view of Venezuelans we are facing extremely serious situations. Some do not want to speak out so as not to be identified and mistreated,” she said.

According to Tijoux, migration “cannot only be addressed by Chile but must also be addressed by the countries involved. Both from where they leave, are expelled or flee, but also where they pass through on terrible journeys during which we do not know how many have died.

“My great hope is the constitution. The constituents are aware of the problem and I trust that a door of humanity will open there,” she said.