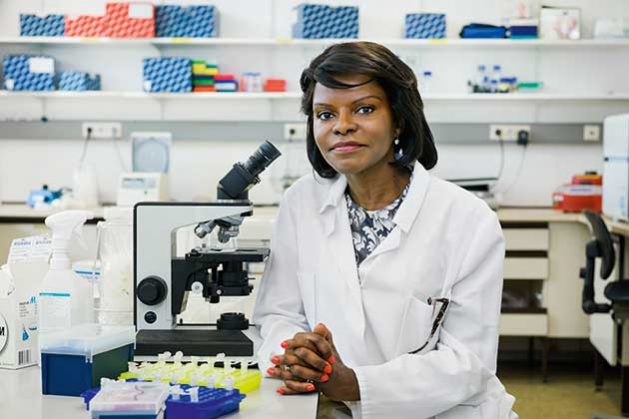 BONN, Mar 4 2022 (IPS) - Again we commemorate International Women’s Day – it is March, 8. We want to celebrate women’s achievements and raise awareness for their successes, taking action for equality. Today I would like to draw your attention to women in science and in particular to one outstanding scientist.

Did you ever hear of Professor Francine Ntoumi? If so, you may already know that she is a Congolese parasitologist specializing in epidemiology of malaria. As the first African person in charge of the secretariat of the Multilateral Initiative on Malaria in Dar es Salaam/Tanzania (2006-2010), she became well-known for her research. Today, she focuses on other infectious diseases, leading important research activities.

To give some background on her career: Born 1961 in Brazzaville, Republic of Congo, she received her education both in Brazzaville and Paris. After finishing her Ph.D., she started her career at the Pasteur Institute of Paris, then moving as a researcher to Gabon and taking over the position as Scientific Director for the European Developing Countries Trials Partnership in The Hague/Netherlands (2006/2007). Due to her outstanding career and knowledge, she became a member of many scientific and advisory bodies, including the International AIDS Vaccine Initiative, the WHO and the Global Health Scientific Advisory Committee of the Bill and Melinda Gates Foundation.

In my country, Germany, she has received the Georg Forster Research Award in 2015, a highly respected distinction for scientists. And just recently, in January 2022, she was appointed as Assistant Professor for tropical diseases at the University of Tuebingen, a place where she had already been working before. On her Facebook account she is telling us that this recent appointment goads her to spread her knowledge to others.

Impressed by her career, I was drawn to reflect on women in science altogether. Is it a fact that women are less attracted by science and what are the obstacles once a career has started? Let us have a closer look at what happens after the birth of a girl: She finds a surrounding either encouraging or not – her family, kindergarten, school, higher education. A smart girl will learn and compete, not getting discouraged by persons who may disesteem her simply because she is a girl. But there are signals, words, sometimes threats, telling her that smarter toys or jobs are not for her, but for boys. Suppose, she did not falter and was not impressed by these actions and will instead succeed, climbing the steps on her education and get her degrees with distinction, followed by a Ph.D.

When she gets a young adult, there is another important choice to make: continuing the research activities or to start a family, often with taking over more burden than her partner will. Being in charge of a newborn or a toddler is a most enriching and, however, time-consuming experience. Depending on your partner’s availability you manage spare time for your (scientific) obligations – or you simply do not. Some young women even do reject to start a family – a choice a man by our culture is not requested to make. Maybe there are female role models to encourage her in finding her way.

From my point of view, Professor Francine Ntoumi depicts such a role model, inspiring others: On February 11, 2022, the International Day of Women and Girls in Science, she advocated for this day, calling it a reminder to work and encouraging young girls committed to scientific work to follow their aspirations. “It is to us, it is to you to act” she is calling upon them, because “no one will do it instead of us” (all to be seen on her Facebook account). What is also seen and understood: Science is hard work, her career was a long and persistent effort, but she did climb this ladder in one direction – always upstairs.

And yet – despite her experience of 40 years, her membership in many scientific bodies, she pointed publicly to the fact that she is often regarded as an UFO as African women in science are highly underrepresented (see an interview with Ntoumi in Agence d’Information d’Afrique Centrale March 2, 2014). What a comparison! Reading this, I did remember the famous American biographical film “Hidden Figures” (2016), telling the story of African American female mathematicians who supported the National Aeronautics and Space Administration (NASA) with their extraordinary analytic skills. The exclusion of these women from the relevant high-level meetings and the removal of their names from reports did soon end when their male supervisors understood their exceptional capacities securing the success of space flights and the reputation of the country.

Reflecting on these remarkable achievements of women in science I firmly believe that we should recognize the contribution of girls and women in building a more sustainable world for all of us. As intellect has no gender, we will need ideas and concepts from all experts worldwide. And there are female experts, everywhere. Let us empower them and listen to them. This very day.