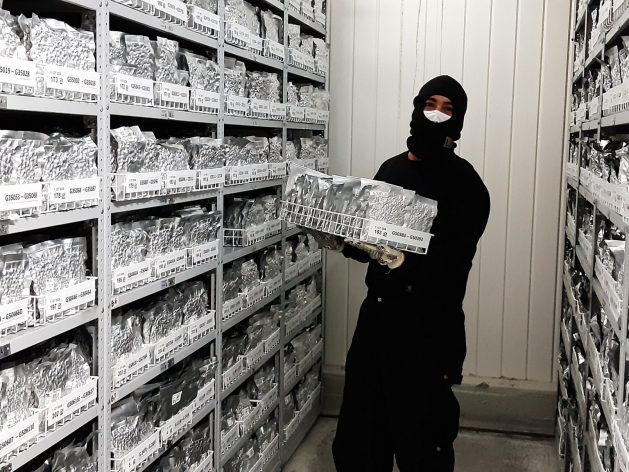 A technician dressed to withstand the freezing temperatures holds a tray of seeds in the Seeds of the Future gene bank. The last phase of the process consists of storing the bags of classified seeds in a room with a temperature of -18 degrees Celsius, awaiting shipment to those interested in using them, from the headquarters of the International Center for Tropical Agriculture (CIAT) in Palmira, in southwestern Colombia. CREDIT: Emilio Godoy/IPS

PALMIRA, Colombia , Mar 30 2022 (IPS) - As he points to a white shelf that holds bean seeds, Austrian biologist Peter Wenzl explains that one of them, obtained in Ecuador, provided a gene for the discovery that major seed protein arcelin offers resistance to the bean weevil.

The finding made it possible to develop varieties tolerant to this common pest and thus avoid substantial losses in one of the crops that feed humanity.

“Our aim is to do research, to understand the development of improved varieties. The seed bank is genetic insurance for the future,” said the biologist, who directs the germplasm bank of the Alliance of the International Center for Tropical Agriculture (CIAT) and Biodiversity International.

They are two of the 15 scientific centers of the CGIAR, formerly the Consultative Group on International Agricultural Research, a consortium of food research organizations promoting food security that is based in Montpellier, France.

The new gene bank, Seeds of the Future, was inaugurated on Mar. 16 with the presence of Colombian President Iván Duque, in an event that also announced a donation of 16 million dollars from the Bezos Earth Fund, created by the founder of U.S. e-commerce giant Amazon, Jeff Bezos.

The facility represents an architectural, environmental and technological leap forward from the previous bank operated by CIAT in the town of Palmira in the southwestern Colombian department of Valle del Cauca.

Founded in 1973, the former seed bank already stored the largest number of cassava (Manihot esculenta), bean and tropical forage seeds on the planet.

Seeds of the Future, the name of the new gene bank, seeks to safeguard global crop diversity and protect the future of food, as well as to study and understand genetic traits to discover more nutritious crops that are resistant to pests and to the effects of the climate crisis.

It also aims to share seeds, information and technology with partners and vulnerable farmers around the world.

The new seed bank, whose construction began in 2018 with an investment of 17 million dollars, has seed modules, a digital laboratory, a seed health laboratory and a laboratory for in vitro testing of cassava.

Of this total, the Alliance contributed 11 million dollars, the Colombian government provided three million dollars and several donors made up the rest. It employs some 60 people, while around 900 work at the center.

In addition, the new facility plans to deep freeze seeds by means of cryopreservation using liquid nitrogen, for long-term storage.

During a tour of the new seed bank by a small group of journalists, including IPS, Wenzl said that with the new facilities there will be more capacity for storage, research and new projects. 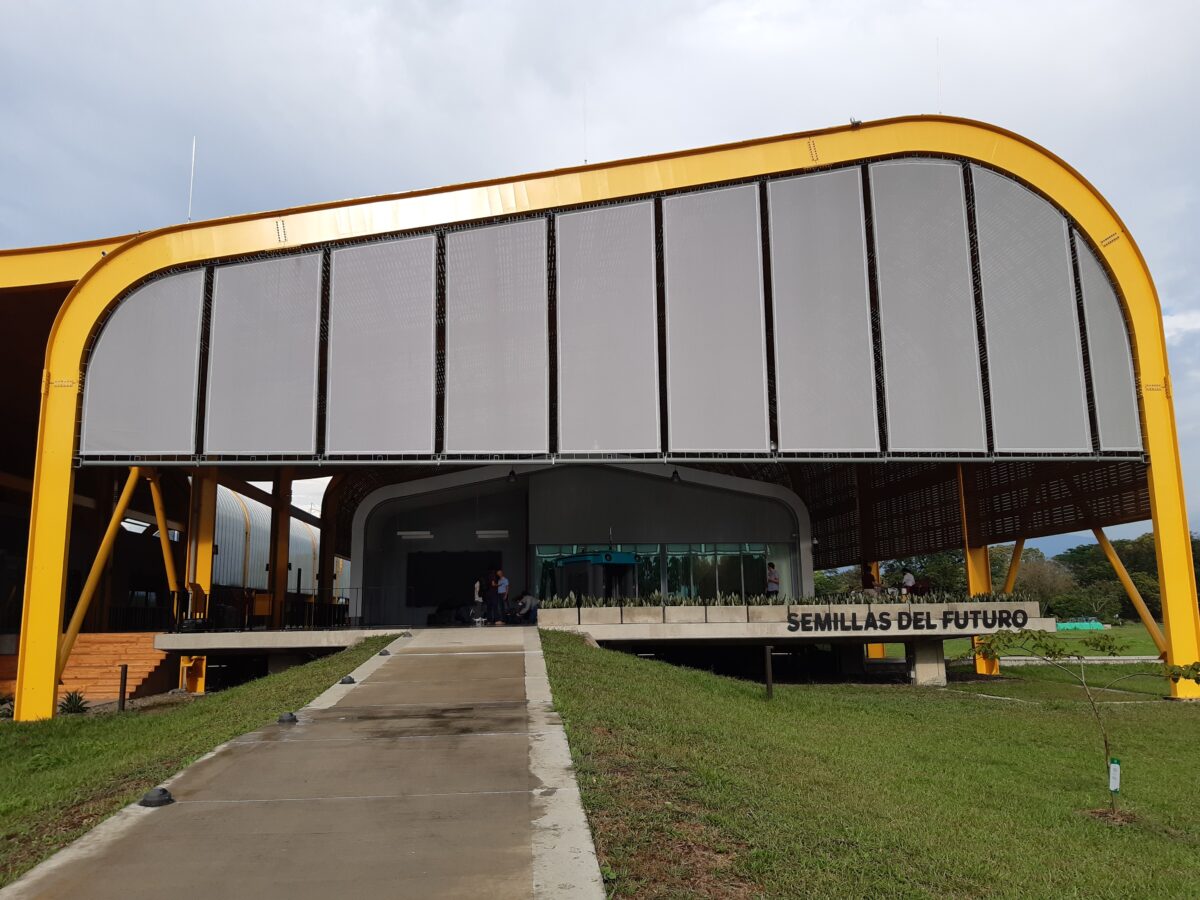 The new germplasm bank Seeds of the Future, inaugurated on Mar. 16 in Palmira, in the southwestern Colombian department of Valle del Cauca, has eco-technologies such as rainwater harvesting, a water recycling system and solar panels. CREDIT: Emilio Godoy/IPS

Faced with the effects of the climate emergency on agriculture, such as higher temperatures, intense droughts and the proliferation of pests, the work of the gene bank shows the importance of adaptation, such as safeguarding the best seeds, and the search for improved varieties.

In fact, in its report on impacts, adaptation and vulnerability to the climate crisis, released on Feb. 28, the Intergovernmental Panel on Climate Change (IPCC) called for greater diversity in food production.

The IPCC’s demand arises from the fact that climate risks go beyond drought, since by the end of this century almost a third of the world’s crop fields will be unfit for production unless the world reduces polluting emissions.

Since its creation, the bank has distributed more than 500,000 samples from 141 countries to more than 160 nations.

The material belongs to the nations of origin, but the samples are freely available.

The gene bank also has wild varieties of five domesticated bean species and germplasm from 40 wild specimens. The cassava collection has 250 genotypes of wild species. More than a third of the tuber’s diversity comes from Colombia and almost a quarter from Brazil.

The operations at the new headquarters will strengthen the work with similar collections, such as the 100 gene banks operating in Mexico, 88 in Peru, 56 in Brazil, 47 in Argentina and 25 in Colombia. 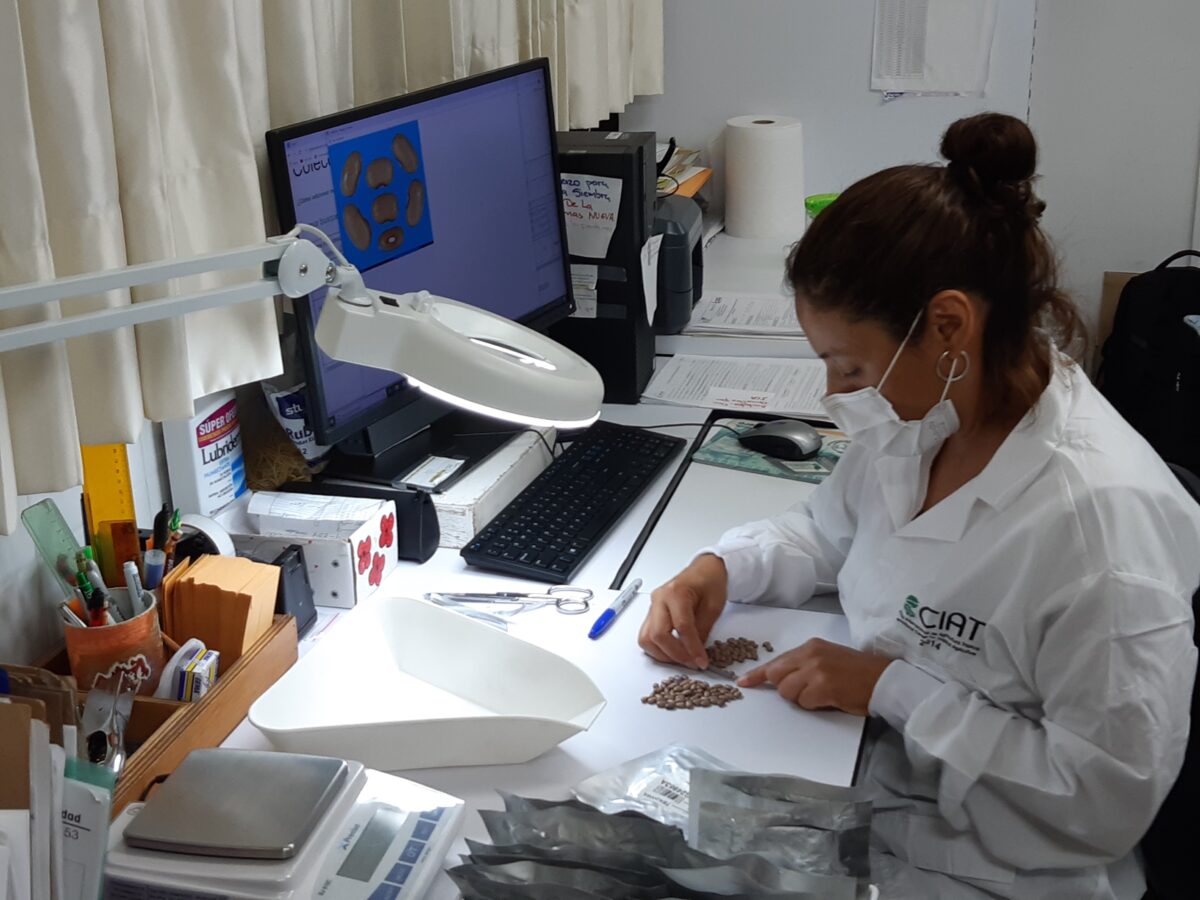 The process of storing seeds with the embryos of future plants in the new facility in Palmira, in southwestern Colombia, begins with the analysis of their characteristics, as practiced by researcher Mercedes Parra at the Seeds of the Future gene bank. CREDIT: Emilio Godoy/IPS

When material arrives from a university, scientific center or grower group, researchers examine its characteristics to verify that it meets quality and biosafety requirements. They then inspect its genetic structure, in a first step to reveal properties that can lead to resistance to pests or drought or to better yields.

This information goes to the center’s database and to the digital laboratory equipment, which performs technological feats to collate, sift and correlate the information. The last step consists of vacuum storage in small bags at -18 degrees Celsius, in a process that takes three to four months.

The bank only collects single seeds, to make the effort of safeguarding the germplasm – of which it creates three backup copies – efficient.

It shares each one with the International Maize and Wheat Improvement Center, another CGIAR partner located in central Mexico, epicenter of the so-called green revolution that increased food production in the developing world at the cost of polluting the soil with synthetic fertilizers.

It also sends another to the Global Seed Vault, the Noah’s Ark of future food built in 2008 and located on the Norwegian island of Spitsbergen in the remote Arctic Svalbard archipelago, and managed by the Norwegian government, the Global Crop Diversity Trust and the Nordic Genetic Resource Center.

CIAT, with 400 hectares of land in the municipality of Palmira, near the city of Cali, Colombia’s third largest city in terms of population and economy, has 22 hectares planted with cassava, two with beans and another 10 with forage plants, to test techniques to improve these crops. 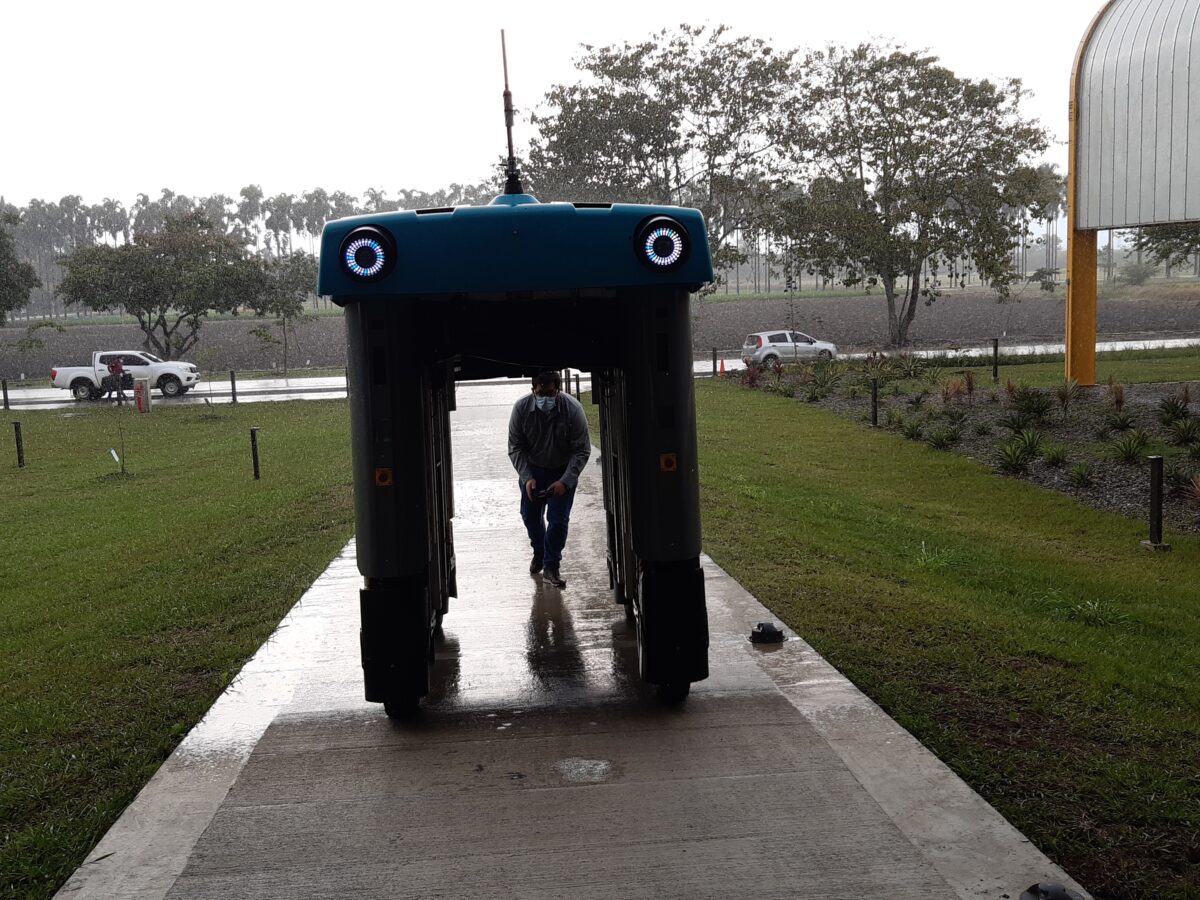 CIAT incorporates cutting-edge technology, such as the autonomous robot “Don Roberto”, in a collaboration with Mineral, a sustainable agriculture project of X, the innovation plant of the U.S. transnational Alphabet, parent company of Google. Don Roberto collects data on the status of beans and other seeds critical to global food security. CREDIT: Emilio Godoy/IPS

In addition, the center has four other research sites on farms in the area to study crops and silvopastoral systems.

A seed holds ancestral secrets and is at the same time memory and inheritance, a reminder of what its family was and a potential announcement of what it can be.

The seed bank also contains a paradox, since the basis of its collection dates back to a time when anyone could appropriate a material and take it far from its place of origin.

But with the advent of biodiversity and species protection treaties in the 1990s, this flow, also intended to safeguard that same biological wealth, stopped.

Today, 20 species are the basis of the world’s food supply, due to the concentration and assimilation of previously more diverse diets. Historically, humankind has used 5,000 species, but another 369,000 could serve as food.

“Many of these materials have been lost in agriculture. In Valle del Cauca there are no longer bean or cassava crops, only sugarcane,” said Daniel Debouck, director emeritus of the germplasm bank. 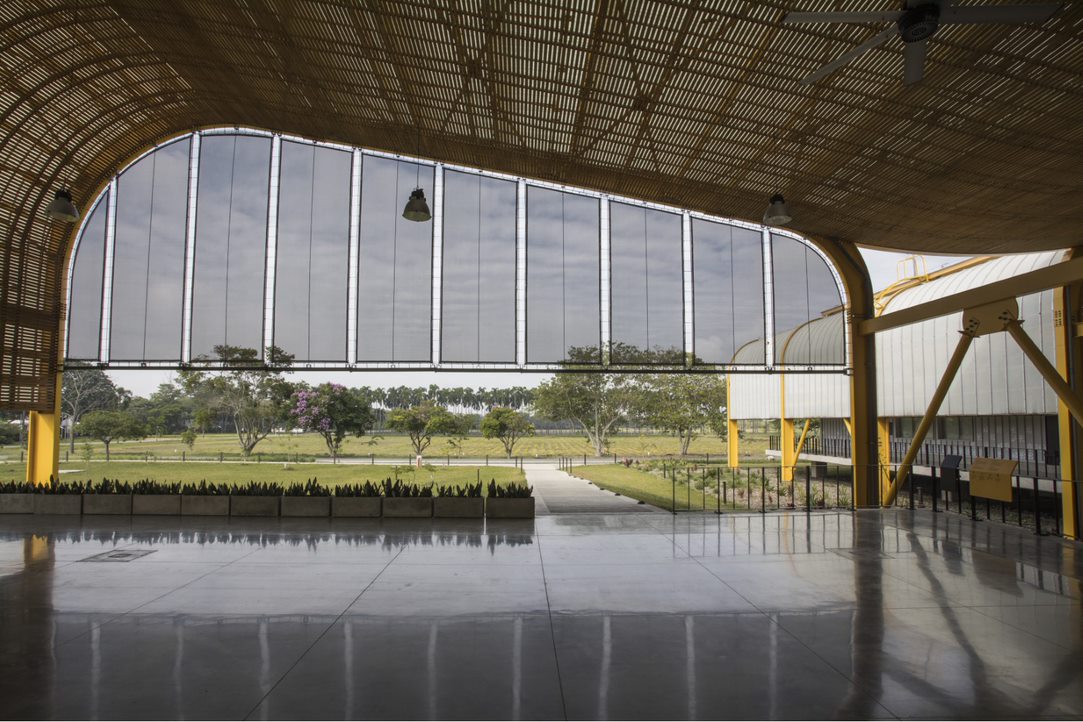 Another view of the new state-of-the-art building that houses the Seeds of the Future gene bank in Palmira, in southwestern Colombia, at the headquarters of the International Center for Tropical Agriculture (CIAT), where the seeds of the world’s agricultural future are stored in times of uncertainty due to the climate crisis. CREDIT: Courtesy of Ciat-Biodiversity International Alliance

The data revolution in agriculture

One of CIAT’s innovations consists of the use of massive data and artificial intelligence, i.e. the use of computer codes to process the information.

“We work to avoid duplication of seeds and to interconnect the data to improve varieties. If the data yield important information on genes, they can be used for genome editing (cutting out harmful genes),” seed bank researcher Mónica Carvajal told IPS.

Of the total number of materials, 7,000 already have a complete digital sequence; in the case of beans, only 400. This year, the team is concentrating on the series of the entire collection of the common bean (Phaseolus vulgaris) and the tepary bean (Phaseolus acutifolius), native to the southwestern United States and northwestern Mexico and more resistant to dry climates than the common bean.

“We are interested in finding resistance to heat and drought,” the expert said.

Information from digital sequencing has gained relevance in recent years, due to the advances made by information technology. In fact, CGIAR has a big data platform in place to enhance collaboration between its partners and research.

As part of its strategy to link research and consumption, the Alliance is developing a project to biofortify rice, beans and corn with iron and zinc. Since 2016, they have released more than 40 bean varieties in Central America and Colombia, benefiting some 500,000 people. In Colombia, they have distributed two types of beans, one of rice and one of corn.

The seed bank building holds Leadership in Energy and Environmental Design certification from the U.S. Green Building Council and the Living Building Challenge from the Seattle-based International Living Future Institute.

Among its innovations, it operates with a rainwater harvesting system that meets its water needs, backed by a water recycling scheme; solar panels that provide half of the electricity; and a pergola made of certified wood that prevents heat accumulation.