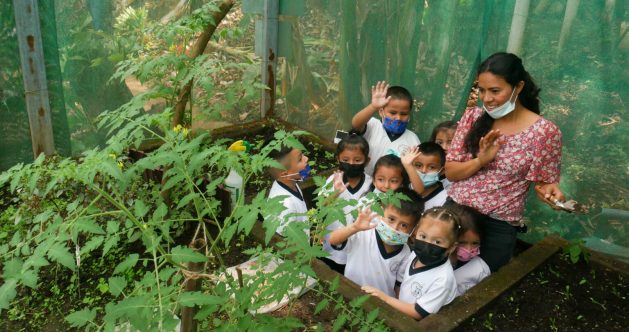 Preschool students stand in a section of the garden at the El Zaite Children's Center, where teacher Sandra Peña teaches them the importance of healthy eating and the advantages of having a vegetable garden, in El Zaite, a poor neighborhood near Zaragoza, in the southern Salvadoran department of La Libertad. CREDIT: Edgardo Ayala/IPS

ZARAGOZA, El Salvador , Apr 11 2022 (IPS) - A group of preschool students enthusiastically planted cucumbers and other vegetables in their small school garden in southern El Salvador, a sign that school feeding programs are being revived as the world emerges from the COVID-19 pandemic.

Although the impacts of coronavirus are still being felt, schools in Latin America, particularly in Central America, have reopened their doors to on-site and blended learning classes.

Gradually, important components of school meal programs, such as vegetable gardens, have begun to come back to life.

“Does anyone know what plant this is?” teacher Sandra Peña, 36, asked the small group of children who had followed her, in line, to the small vegetable garden at the El Zaite Children’s Center, located on the outskirts of Zaragoza, a city in the department of La Libertad in southern El Salvador.

The children responded loudly: “tomato!”, while pointing to a tomato bush, which was already showing some yellow flowers.

With difficulties, because coronavirus hasn’t gone away, schools in Central America are making efforts to continue the school feeding programs, which were making good progress before the pandemic.

According to the United Nations Food and Agriculture Organization (FAO), these programs benefit 85 million students in Latin America and the Caribbean. Moreover, for nearly 10 million children, they are one of the main reliable sources of food received each day.

“Students are returning to classes, in a context that is not yet back to normal, but they are gradually returning,” Najla Veloso, an expert with the Brazil-FAO International Cooperation Program, told IPS from Brasilia.

As a result of this cooperation, at the beginning of the pandemic, in 2020, several Latin American and Caribbean countries carried out joint actions to keep school feeding programs active, as part of the Sustainable School Feeding Network (Raes).

Raes was created by the Brazilian government in 2018, as part of the UN Decade of Action on Nutrition (2016-2025), in order to support countries in the region in the implementation and reformulation of school feeding programs, based on access and guaranteeing the right to an adequate diet. 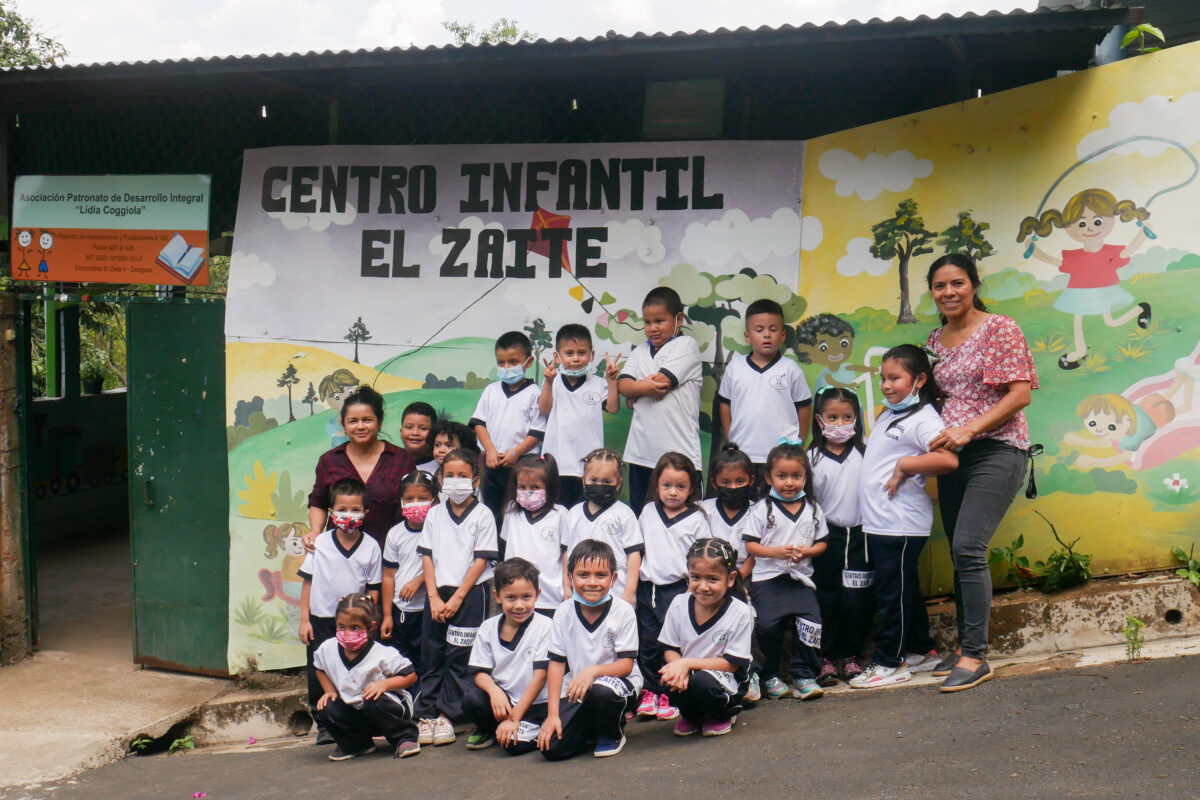 Teachers Marta Mendoza (l) and Sandra Peña pose with their students at the El Zaite Children’s Center, located in a community that is struggling to get ahead in a context of poverty and violence, like many villages and towns in El Salvador. CREDIT: Edgardo Ayala/IPS

When the pandemic hit and schools were closed, activity in school gardens and the kitchens where food was prepared ground to a halt. That meant strategies had to be devised to make sure the students had food – not in the schools, but in the homes of families who were under lockdown to curb the spread of the virus.

The stopgap solution was to take non-perishable food to the students’ homes, because meals were not being cooked in the schools.

The FAO expert pointed out that Guatemala and El Salvador did a good job in this regard and, in general, all the Central American countries made an effort to keep their students fed.

“Some countries had to change their laws, because food could only legally be given to students, and with the schools closed they could no longer deliver it to them, and they had to give it to fathers, mothers and the families,” Veloso explained.

The logistics of an already complex program had to be expanded greatly, with components such as local purchases, which involved coordinating the purchase of legumes, grains, vegetables, fruits and other products that were part of the school menus from local farmers.

In some cases, seed kits and farming tools were also provided so that families could plant vegetables in their home gardens, since the school gardens were no longer functioning.

Now that in most of the seven Central American countries schools are open again with a mixture of online and face-to-face learning, food is no longer taken to students’ homes, but rather parents come to the schools to pick up the products.

In the case of El Salvador, the Ministry of Education has invested, for the school year that began in January and ends in November, more than 10 million dollars for the food program to serve more than one million students nationwide, in 5128 public schools.

In this Central American nation of 6.7 million people, two food baskets have begun to be delivered, one containing a 1.1 kilogram bag of corn cereal for breakfast and seven liters of UHT liquid milk, while the other contains rice, beans, sugar, oil, powdered milk and a vitamin-fortified drink.

When IPS visited, parents and teachers at the school in the canton of San Isidro, in the municipality of Izalco in the western department of Sonsonate, were in the process of quarterly delivery of the baskets of items, which for now is replacing the serving of meals at public schools. 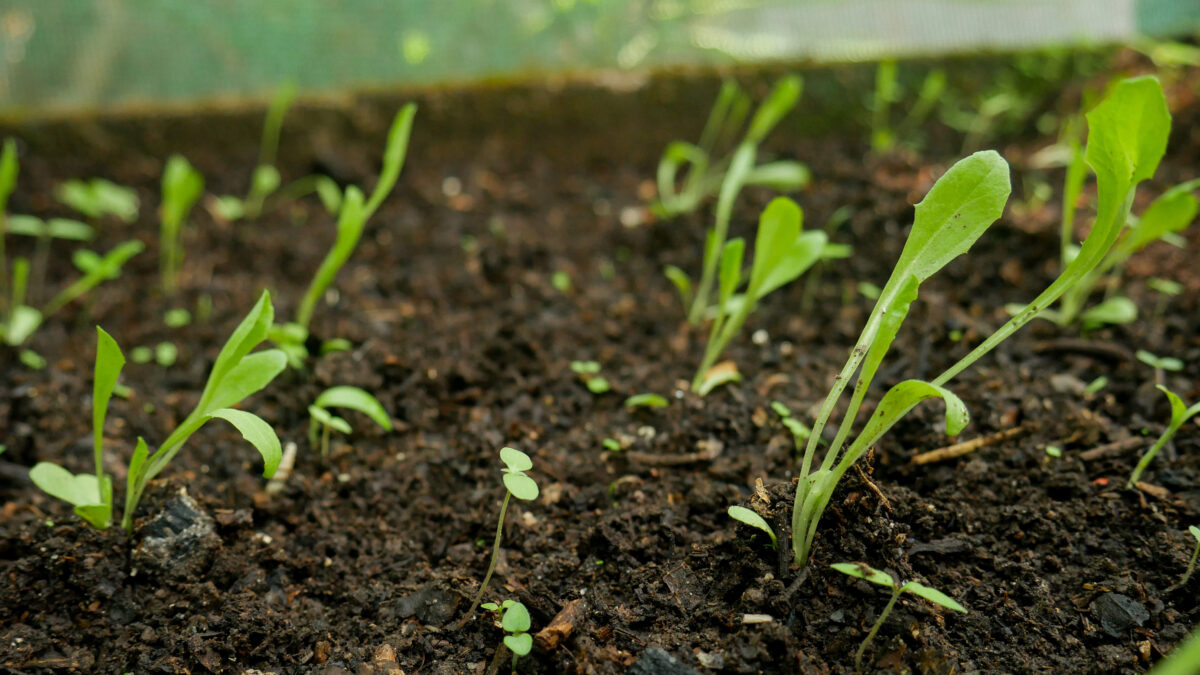 The photo shows sprouts planted by students at the El Zaite Children’s Center, in the south of El Salvador, in the school garden that will soon produce vegetables for their school meals again – part of the effort to keep the garden and healthy eating alive, now that schoolchildren are beginning to return to school as the COVID pandemic dies down. CREDIT: Edgardo Ayala/IPS

“We have had to manage to get by during the pandemic, and now we are gradually getting the vegetable garden going again, for example,” said Manuel Guerrero, the school principal.

The school in San Isidro, which has been semi-open since 2021, serves 1,500 elementary and middle school students.

“Teachers are already working with the students in the gardens to make up for lost time,” added the 57-year-old principal.

Before the pandemic, they grew tomatoes, green peppers, yucca, cabbage and a local plant known as chipilín (Crotalaria longirostrata), whose leaves are added to soups for their high vitamin content.

“From our experience, and because I have visited many schools, I would say that the idea of school gardens has been well assimilated from the beginning, and that is why we must work hard to maintain it,” Guerrero added.

At the El Zaite Children’s Center, activities in the kitchen are back in full swing, although not as they were prior to the pandemic, when the cook, Dinora Gómez, took great care to ensure that the menus were to the children’s liking.

Somewhat nostalgically she reminisced to IPS about those days when she toiled away over pots and pans.

“For example, for lunch, I would make them a vegetable mince, with soy meat, tomato sauce and rice,” said Gómez, 50. Other times it was lentil soups and other vegetables.

For breakfast, “I would make scrambled eggs, fried beans and plantains,” she added.

Non-perishable food packages donated by Convoy of Hope, an evangelical organization, are also distributed to the students’ families. 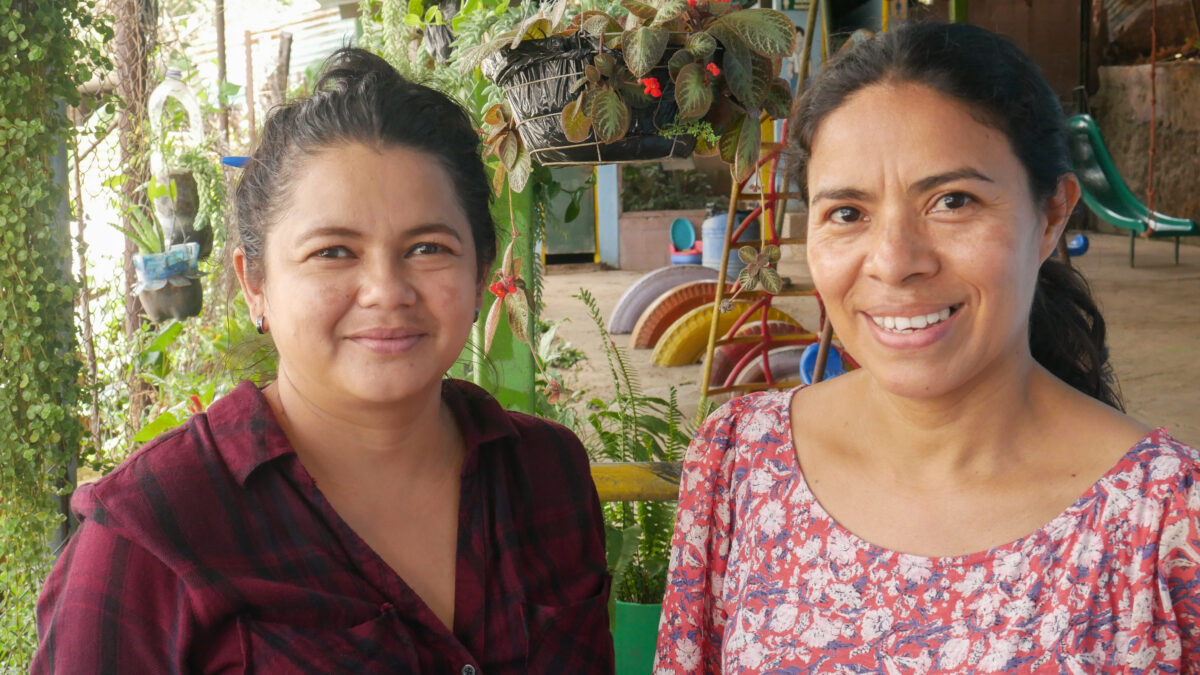 Marta Mendoza and Sandra Peña are part of the teaching team at the El Zaite Children’s Center in southern El Salvador, where they are striving to return to the pre-pandemic standards of education and nutrition. CREDIT: Edgardo Ayala/IPS

Now, although the kitchen is still formally closed, Gómez is preparing something to eat for a small group of students whose parents are unable to provide them with a mid-morning snack.

She also occasionally makes a salad from the vegetables grown in the garden.

This small school in El Zaite, which opened in 1984, serves 110 students ages four to six, and has six teachers.

The school is located in a low-income semi-rural community populated by people who settled here in the 1980s, fleeing bombings and military operations during the Salvadoran civil war (1980-1992). It is now home to 563 families.

“We are on land that used to be the pastures for the cattle of the wealthy people of Zaragoza,” Carlos Díaz, director of Patronato Lidia Coggiola, the NGO carrying out community support initiatives in this area, including the school, told IPS.

The school is a community project that falls outside the network of the Ministry of Education, which follows its curriculum as required but puts an added emphasis on topics such as the right to water or taking care of the environment.

In 1999, as part of the Patronato’s activities, a scholarship and distance sponsorship program was launched with support from donors from Italy, France and the United States, to benefit young people from the community who wished to continue their high school and university studies.

One of the beneficiaries of the initiative was Marta Mendoza, who attended preschool at the center, graduated from university and now returned to the center as a teacher.

“We formed the groups, and we are working on reading,” Mendoza told IPS. “The children came out of the lockdown with very energetic behavior.

“Little by little we are getting back to the dynamics we had in the classroom prior to the pandemic,” she said.