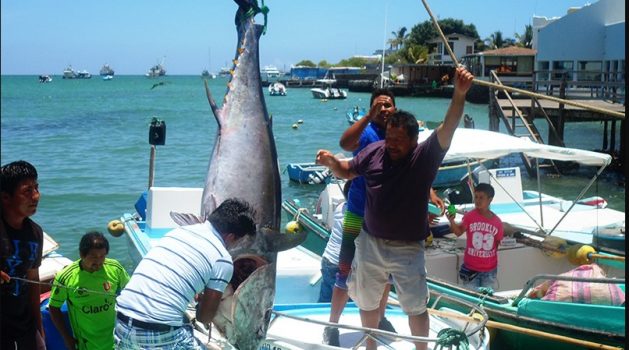 Only artisanal fishing is allowed in the waters surrounding the Galapagos Islands, where it is possible to catch large, valuable fish. The area is a marine reserve, a nursery of species for the eastern Pacific and is off-limits to industrial fishing. But its continental shelf is increasingly under siege by the Chinese fleet. CREDIT: MAG Ecuador

CARACAS, Aug 18 2022 (IPS) - Illegal and excessive fishing, mainly attributed to Chinese fleets, remains a threat to marine resources in the eastern Pacific and southwest Atlantic, as well as to that sector of the economy in Latin American countries bathed by either ocean.

Worldwide, “one out of every five fish consumed has been caught illegally, 20 percent of the nearly 100 million tons of fish consumed each year, and generally in areas closed to fishing,” veteran Venezuelan oceanographer Juan José Cárdenas told IPS.

An emblematic case, said the researcher from the Simón Bolívar University in Caracas, is the Galapagos Islands, 1,000 kilometers west of the coast of Ecuador, surrounded by a 193,000-square-kilometer protected marine area, a hotbed of species in great demand for human consumption.

“For several species in the eastern Pacific we are already at the edge of the environmental precipice with legal fishing; a small additional fishing effort, illegal fishing, is enough to affect the sustainability and food security that these species provide." -- Juan José Cárdenas

Galapagos, an archipelago totaling 8,000 square kilometers, is famous for its unique biodiversity and as a natural laboratory used by the English naturalist Charles Darwin (1809-1882) for his theories on evolution.

The Ecuadorian Navy indicated that in June they maintained surveillance of 180 foreign vessels, including fishing boats, tankers and reefers, fishing near the 200 nautical mile (370 kilometers) limit of the Galapagos Exclusive Economic Zone (EEZ), also known as the continental shelf.

In the Pacific they have fished intensively for giant squid (Dosidicus gigas). According to the satellite tracking platform Global Fishing Watch, 615 vessels did so in 2021, 584 of which were Chinese.

Alfonso Miranda, president of the Committee for the Sustainable Management of the South Pacific Giant Squid (CALAMASUR), made up of businesspersons and fishers from Chile, Ecuador, Mexico and Peru, said that this year 631 Chinese-flagged vessels have entered Ecuadorian and Peruvian Pacific waters. 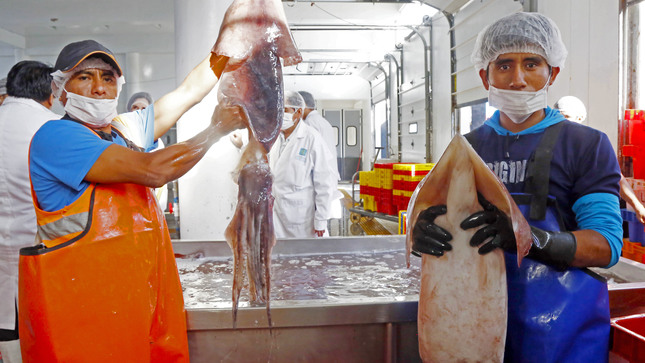 The giant squid is the second most important fishing resource for Peru, after anchovy, and its catch generates more than 800 million dollars a year and thousands of jobs, which is why the country seeks to prevent incursions into its waters by vessels of other flags, especially from China. CREDIT: Government of Peru

Cárdenas the oceanographer pointed out that the area is rich in tuna, of which more than 600,000 tons are caught annually (10 percent of the world total), but posing a serious threat to sustainability, for example with the use of fish aggregating devices or FADs that alter even the migratory habits of this species.

According to the Food and Agriculture Organization (FAO), 34 percent of tuna stocks in the seven most widely used tuna species are exploited at biologically unsustainable levels.

For several species in the eastern Pacific, including some whose fishing is banned such as sharks, “we are already at the edge of the environmental precipice with legal fishing; a small additional fishing effort, illegal fishing, is enough to affect the sustainability and food security that these species provide,” said Cárdenas.

Pedro Díaz, a fisherman in northern Peru, told the Diálogo Chino news platform in the port of Paita that “we don’t just want to fish and catch. We want to allow the giant squid to breed and grow so that it can generate employment and foreign currency for the State.

“We also want the giant squid to have a sustainable season, and what will those who come after us, the young people who take up fishing, find?” he added.

FAO fisheries officer Alicia Mosteiro Cabanelas told IPS from the U.N. agency’s regional headquarters in Santiago, Chile that “it is not always possible to measure the impact of a given fleet operating in areas adjacent to the exclusive economic zone of coastal nations.”

This is because “there is not always a stock assessment of the target species, nor is there information available on retained, discarded and incidental catch, or on the number of vessels authorized to operate by the respective flag States and unauthorized vessels.” 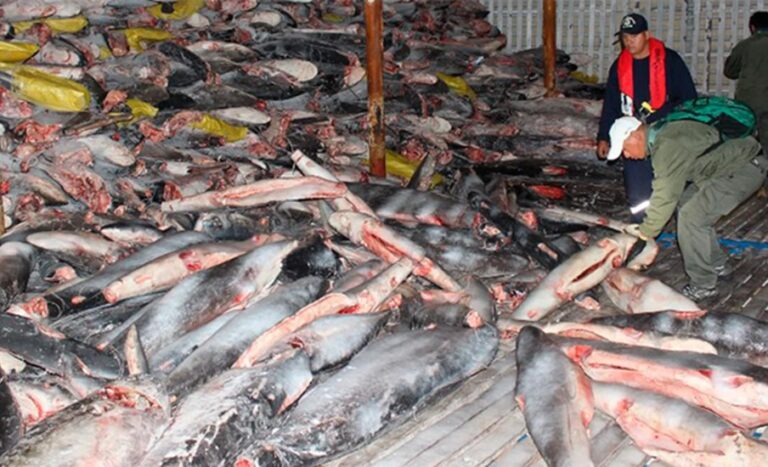 Mosteiro Cabanelas noted that “overfishing always has a direct impact on the sustainability of resources, generating a decrease in income for the fishing sector and in the availability of fishery products for local communities and consumers in general. Latin America is no exception.”

And for FAO it is clear that “illegal, unreported and unregulated (IUU) fishing is a global problem that compromises the conservation and sustainable use of fishery resources,” said the expert.

The media in coastal countries also report that fishers in Latin America – citing cases from Brazil, Chile and Mexico – are violating bans and extracting valuable species whose fishing is not permitted. Ecuadorians have exported large quantities of shark fins, after declaring the sharks as bycatch.

Shark fins are highly sought after in places like Hong Kong – where shark fin soup can cost up to 200 dollars – and the World Wildlife Fund (WWF) estimates the global trade in shark and ray meat at 2.6 billion dollars. 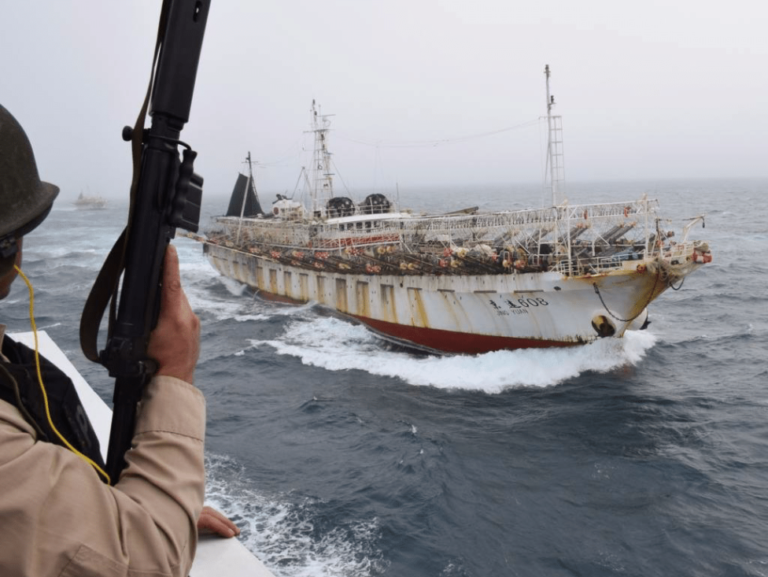 The Argentine Navy carries out surveillance of a Chinese fishing vessel at the limits of the country’s Exclusive Economic Zone, which is rich in squid, hake and prawns. CREDIT: Argentine Naval Prefecture

Keeping an eye on poachers

Last year, some 350 Chinese-flagged vessels fished during the first half of the year off Argentina’s territorial waters, where there is a wealth of another kind of squid, the Argentine shortfin squid (Illex argentines), as well as Argentine hake, prawns and other prized species.

It is a fleet that, according to Argentine ship captains, commits IUU with unreported transshipments that camouflage illegal fishing, transferring fish between vessels and turning off the transponders that indicate the ships’ location.

A report published in June by Oceana, an international non-governmental organization that tracks IUU fishing, claimed that more than 400 Chinese-flagged vessels fished for about 621,000 hours along the Argentine EEZ between 2018 and 2021, and disappeared from tracking systems more than 4,000 times.

Industry reports in the local media indicate that foreign vessels (Chinese, South Korean, Taiwanese or Spanish) have caught up to 500,000 tons of squid annually, near or within its EEZ – a volume that can represent between five and 14 billion dollars a year. 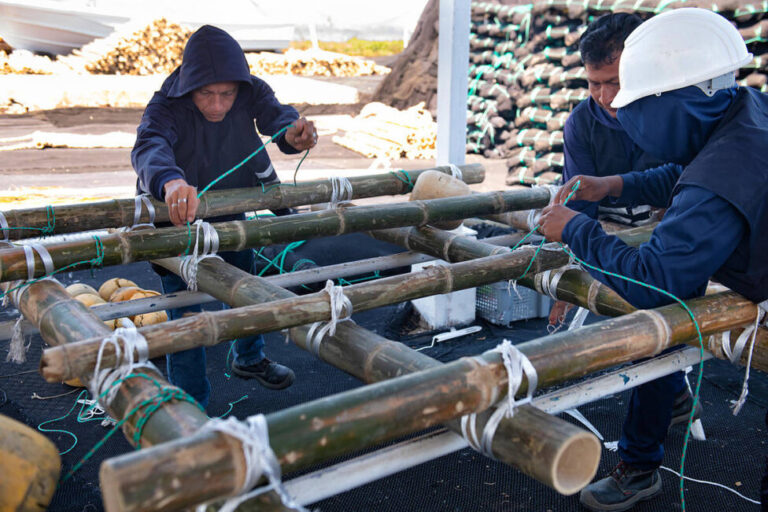 Fish aggregating devices or FADs are used in the eastern Pacific to facilitate and increase tuna catches, aggravating the threat of overfishing and even posing a risk of altering the migratory habits of the species. CREDIT: WWF

And the problem is not only seen in Argentina: last Jul. 4, the Uruguayan Navy captured in its territorial waters, 280 kilometers from the Punta del Este beach resort, a Chinese-flagged vessel, the “Lu Rong Yuan Yu 606”, dedicated to squid fishing, which was apparently fishing furtively at night in that area.

As the holds were empty, it could not be established with certainty that it was fishing in the Uruguayan EEZ, and the ship was released after payment of a fine for contravening other navigation regulations.

There was no repeat of the 2017 experience in Ecuador with the “Fu Yuan Yu Leng 999”, a vessel that functioned as a large refrigerator to store the catch of other vessels, which was operating illegally in the Galapagos Marine Reserve.

About 500 tons of fish, including vulnerable and protected species, were found on the ship, especially some 6,000 hammerhead sharks.

The Ecuadorian justice system handed prison sentences to the captain of the ship and three crew members for the crime of fishing for protected species, and fined them 6.1 million dollars. As the payment was not made, the vessel became the property of the Ecuadorian Navy.

China has formally banned its fleet from operating in prohibited waters and warned captains that it will withdraw licenses from those who violate these rules, and President Xi Jinping gave assurances to that effect to his Ecuadorian counterpart Guillermo Lasso when the latter visited Beijing in February.

At the same time, Washington is working with countries such as Colombia, Costa Rica, Ecuador, Mexico and Panama on agreements to help monitor the Chinese fleet, the largest in the world, which has 17,000 ships catching 15 million tons a year in the world’s seas.

The U.S. initiative is part of its renewed global confrontation with the Asian giant, the so-called new cold war.