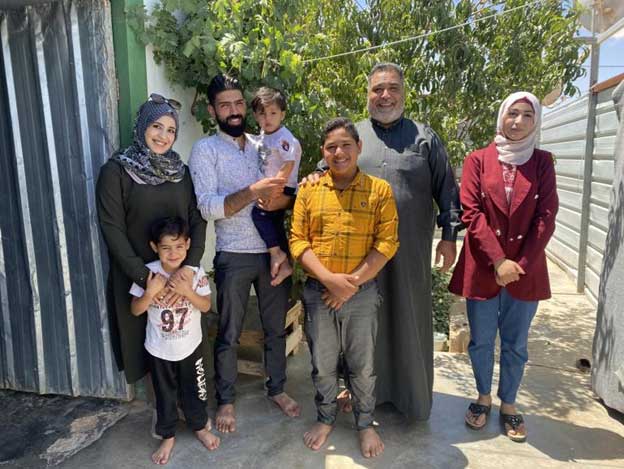 ZA’ATARI REFUGEE CAMP, Jordan, Aug 25 2022 (IPS) - “I think I’m making a difference. I’m really helping,” Hanadi tells me, as she reflects on her work in the Za’atari refugee camp in Jordan.

She is teaching computer skills to a class of Syrian children aged 11 to 16. The students are animated and engaged by Hanadi’s lesson as she walks them through some basics.

“I teach them enough to get a start,” she says.

I first met Hanadi in 2013 – eight months after Za’atari camp opened in response to the huge refugee influx from across the border in Syria. She was 17 years-old and attending a similar vocational training centre in the camp, which is supported by UNICEF.

She had arrived at Za’atari three months before, having fled with her family and whatever they could carry from their home near Damascus. Back then, she told me about her relief that she could return to school and the desire to keep learning.

Fast forward almost a decade, and it’s inspiring to see how Hanadi has gone from student to teacher. Like so many of her peers, Hanadi has experienced things in her young life that no one should. But despite the immense challenges, she persevered and now dedicates her life to creating a better future for the next generation. 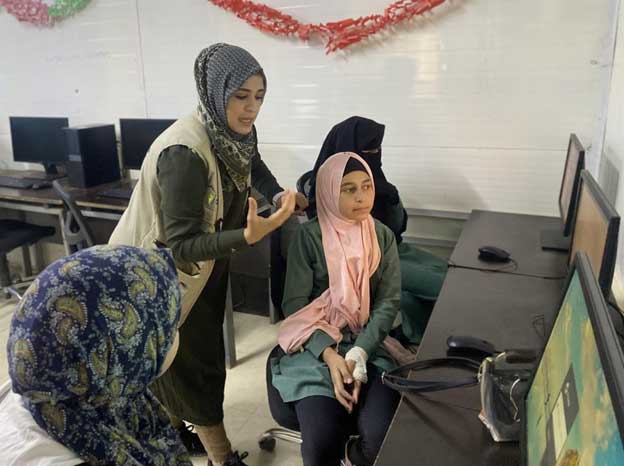 Unlike many young people in the camp who struggle to find meaningful opportunities as they leave high school, Hanadi completed her education, went to university and earned a degree.

Now she’s married to Tariq, is bringing up two delightful children and is encouraging young Syrians to develop the practical skills needed to help them achieve their full potential.

Still, fleeing war and a decade of life in a refugee camp for 80,000 people inevitably takes a toll. “My hope is to get back [home],” Hanadi told me in 2013, tears in her eyes. That hasn’t happened, and her own children have never lived in a house, let alone set foot in the family home.

A life in limbo

There’s little shade from the brutal midday sun as we approach the home of Abu Kareem, Hanadi’s father. The camp looks much as it did during that first year, when families moved out of tents into large containers, and school compounds sprang up, run by the Ministry of Education with UNICEF support.

Gone are the queues at water points, from which women and children once lugged heavy jerrycans in the extreme heat of the day. Instead, an innovative and environmentally-friendly water and sanitation system has fully replaced the need for the water trucks that used to stir up dust storms as they navigated narrow desert paths across the camp. Now, water flows from a tap into Abu Kareem’s kitchen.

The services on offer for children and young people, from learning support to vocational training and sports, are today largely managed by Syrians themselves, providing much-needed income and ensuring a more sustainable, community-owned operation.

This has been critical as funding has decreased in the wake of multiple global crises that are vying for the world’s attention.

“We’re dealing with young people who have grown up amidst the trauma of war and are now transitioning to adulthood at a very uncertain time when opportunities can seem limited,” Tanya Chapuisat, UNICEF’s Representative in Jordan, tells me.

“In the rush to provide lifesaving services to refugees fleeing the border ten years ago, I’m not sure that any of our UNICEF colleagues could have imagined that we would be here a decade later,” she says.

This uncertainty clearly weighs on Abu Kareem’s mind. His family have transformed their home, watering the courtyard to create some welcome green space and expanding the structure as the family has grown over time.

It’s impressively homely, as it always has been. But the impact on his family of living within the confines of a camp is an ongoing concern.

“Our children have only lived in the camp,” he says. “It’s a wider world out there, [but] they don’t know how it works.” Life beyond the camp’s perimeter remains a distant dream.

A five minute drive away, on the edge of the camp, we meet Abu Thaer, who is finishing a shift at one of Za’atari’s schools. We first met when the school – the third one in the camp – opened in 2013. Abu Thaer has played a key role in its growth, with some 2,200 children now attending classes.

His daughter, Omaima, now 21, attended the school. Like Hanadi, she is an inspiration to other young people in the camp. Omaima is the only Syrian refugee studying at the Law Department of a nearby university and her sole focus now is ensuring her studies are a success.

“I don’t have time to even make friends. The days at university I’m so tired, I can’t do anything else,” Omaima says. She received a scholarship to help her move into higher education, although Abu Thaer continues to do what he can to support his five children.

“I want to keep my family floating. I want to give the children a start in life,” he says. Over a delicious Majboos (a chicken and rice dish) at the family home, Abu Thaer reflects on a decade in the camp.

“We’re still safe and have adjusted to the circumstances and we are grateful for that,” he says. “The kids have grown up in this set-up and we don’t know what the future holds. That’s the most negative thing.”

The hospitality, generosity and warmth of Abu Kareem, Abu Thaer and their families – indeed of everyone I’ve ever met in Za’atari – never ceases to amaze me. But as the eyes of the world have shifted to other emergencies, a generation of children in Za’atari are transitioning into adulthood and raising their own children.

While I was in Romania and Ukraine a few weeks earlier, I couldn’t help but think of children like Hanadi and Omaima. As another war forces children into refuge and upends young lives, we owe it to them to continue to provide them with the opportunities they need to survive and progress. Especially when a distant home remains out of touch, for now at least.