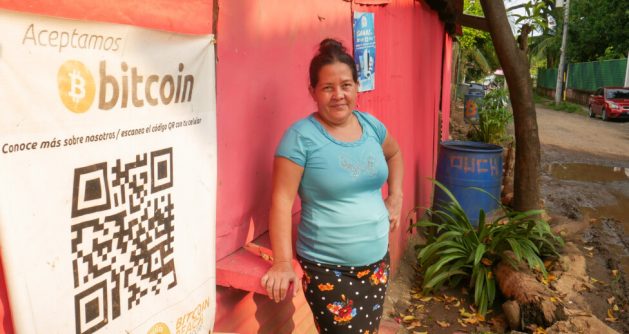 María del Carmen Aguirre, 52, stands outside her home and pizza business in El Zonte, on the Pacific coast of El Salvador. Her daughters send her remittances from the United States, but they use traditional systems and not the bitcoin electronic wallet, after this country became the first to make bitcoins legal tender on Sept. 7, 2021. CREDIT: Edgardo Ayala/IPS

SAN SALVADOR, Sep 7 2022 (IPS) - A year after Salvadoran President Nayib Bukele decided to make El Salvador the first country where bitcoin is legal tender, the experiment has so far failed, as few of the original plan’s objectives have been achieved.

This result was foreseeable since Sept. 7, 2021, when Bukele’s government decided, out of the blue and without any precedent, to make bitcoin legal tender through a law approved by the legislature, controlled by members of the ruling party, Nuevas Ideas.

The aims of that decision were never explained in detail in an official plan, but were basically set out by Bukele, in power since 2019, through his tweets, as well as by officials who merely repeated what the president, given to governing with an authoritarian style, in which he is the only authorized voice for almost everything, has said.

"In the end, the majority of the population is not using either the government e-wallet or bitcoins in general.” -- Tatiana Marroquín

“Unfortunately there is no formal document or official information from the government in which the specific objectives of the measure have been laid out,” economist Tatiana Marroquín told IPS.

But judging by the president’s announcements, and by communications between the government and the International Monetary Fund (IMF), which requested in January 2022 that the measure be annulled, several aims can be highlighted, such as boosting financial inclusion and tourism and improving the country’s “brand”, said Marroquín.

Disenchantment with the Chivo Wallet

The government claimed that bitcoin as legal tender would reduce the gap of unbanked people, which is around 70 percent of the population.

That segment would begin to carry out digital financial transactions with several clicks from their cell phones, according to the government.

However, because much of the information on bitcoin transactions has been classified by the authorities, it is unknown, for example, what percentage of the population is still actively using the Chivo Wallet, the digital wallet created by the government, and in what amounts.

Chivo is basically slang for “cool” in El Salvador.

It is known that at the beginning of the cryptocurrency’s implementation, around four million people downloaded the application, but basically they did so in order to collect a 30 dollar bonus granted by the government to promote the use of bitcoins.

But by this point it is clear that very few people are still using the application, judging by what you hear and see in the towns and cities of this Central American country of 6.7 million people.

“In the end, the majority of the population is not using either the government e-wallet or bitcoins in general,” Marroquin said.

Some businesses use them to receive payments, but there are very few transactions, analyst Ricardo Chavarría, director of Renta Asset Management, a company that manages investment funds in the international market, told IPS.

Nor has the government managed to convince Salvadorans living abroad to use the app to send family remittances to El Salvador, one of its main aims when it dove headfirst into bitcoins.

Each year, the country receives around seven billion dollars in remittances, representing 26 percent of GDP.

In August 2021, a month before the approval of the so-called Bitcoin Law, Bukele said in a tweet that Salvadorans pay around 400 million dollars in commissions to send money to their families in El Salvador.

That amount of money would be saved by sending it through the Chivo Wallet. 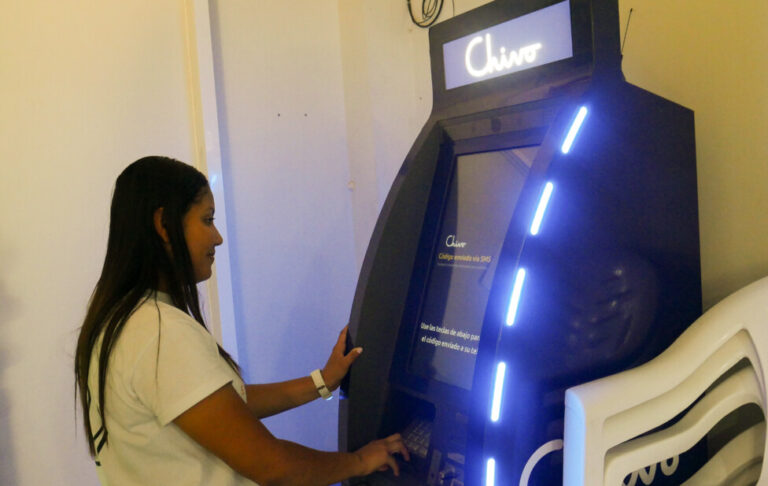 One of the Chivo ATMs scattered throughout El Salvador, in an attempt by the government to make it easier for the public to make transactions in bitcoin, the cryptocurrency that is legal tender in El Salvador, but which very few are using a year after its implementation. CREDIT: Edgardo Ayala/IPS

Not even the diaspora trusts the cryptocurrency

However, according to official figures, only 1.5 percent of remittances were sent through e-wallets in the first quarter of 2022, a percentage far below what the government expected.

This was probably influenced by the high volatility of cryptoassets such as bitcoin, which is currently going through a crisis in its value, dubbed as a crypto winter.

And the Salvadoran population abroad, especially in the United States, where more than three million live, is reluctant to bet on something so volatile and, therefore, risky.

“People are extremely careful, despite the political capital of the president (Bukele), the same people over there (Salvadorans in the United States) do not risk their money,” said Chavarría.

That is the case of María del Carmen Aguirre, a 52-year-old entrepreneur who runs a small pizza business in El Zonte, a coastal community on El Salvador’s Pacific coast, some 50 kilometers southeast of San Salvador, part of the municipality of Chiltiupán, in the central department of La Libertad.

Aguirre told IPS that she regularly receives remittances from her two daughters who live in the United States, in San Francisco, California, but neither of them send the money through Chivo Wallet or any other similar platform.

“They send it only through the bank. It seems that they are quite afraid. ‘What happens if we send 200 dollars and at that moment the price of bitcoin goes down?’ they say to me,” said Aguirre, in her pizzeria.

El Zonte is a beach area known for its surfing and because an unusual community effort to use the cryptocurrency was launched there, about two years before the government decided to try bitcoins.

This initiative was promoted thanks to a donor, who remains anonymous, who gave money to carry out works in the town, but on the condition that those who worked on them would be paid in bitcoins and not in dollars, the legal tender in El Salvador since 2001.

That still raises suspicions: why would anyone be interested in promoting the crypto-asset in a poor coastal town, with dirt roads and modest shacks, although there are also some luxury hotels, hostels and restaurants.

During the COVID-19 pandemic, families in El Zonte received, on several occasions, 30-dollar vouchers from the mystery donor to use for bitcoin transactions.

“They gave us the bonus three or four times so we could go to the stores that already handled bitcoin,” Aguirre said.

Chavarría said the cryptocurrency is probably at the end of the so-called crypto winter, and he expects it to rise again in the future. 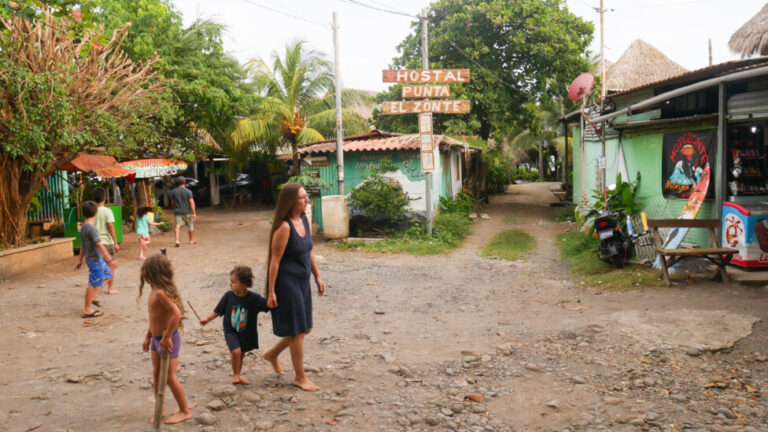 A street corner in the town of El Zonte, on the Pacific coast of El Salvador, which became the place where a project to promote the use of bitcoins in the country started, before the government of Nayib Bukele gave the cryptocurrency legal status in September 2021. Most businesses in this town accept them as a form of payment, but in the rest of the country the use of bitcoins is marginal. CREDIT: Edgardo Ayala/IPS

One thing that Marroquín the economist and financial analyst Chavarría agreed on is that, with the passage of the Bitcoin Law, El Salvador made the global headlines about something other than the recurring issue of gang violence, which used to be the only issue of interest to the international press.

In this sense, it could be argued that the country’s image improved somewhat on the world news agenda.

“The fact that El Salvador is on the news map and that it appears in Bloomberg, in The New York Times, in Spain’s El País, when the only topic before was the gangs, is good news for me as a Salvadoran,” said Chavarría.

Marroquín concurred that “El Salvador is undoubtedly no longer known as it used to be solely for violence.”

She added that the adoption of the bitcoin has also bolstered tourism in the country by attracting a segment of visitors interested in the cryptocurrency, although it remains to be seen whether this improvement will have an impact on poor communities near tourist spots. 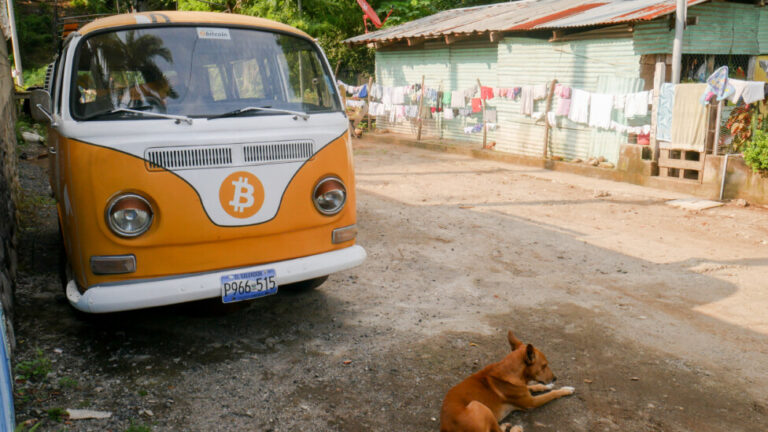 The bitcoin symbol can be seen everywhere in El Zonte, a coastal community in southern El Salvador, such as on this 1970s Volkswagen van or ‘furgoneta’, called the Bitcoineta. The implementation of the cryptocurrency in this country has not gone well and so far has been a setback for President Nayib Bukele, although the outlook could change if the price of the cryptoasset rallies. CREDIT: Edgardo Ayala/IPS

A cloak of secrecy

The government has been harshly criticized for the secrecy with which it has handled not only the adoption of the bitcoin but also other important issues about which the public has demanded information, since they have involved the use of public funds for which the Bukele administration has not been held accountable.

When it has been made available, Information has arrived in dribs and drabs.

It is known that the government has purchased 2,381 bitcoins, on which it has spent 106.04 million dollars. But when related investments are factored in, such as the ATMs placed at various points around the country, the total investment exceeds 300 million dollars.

“There is a big black cloak surrounding the government’s use of public funds,” Marroquín said.