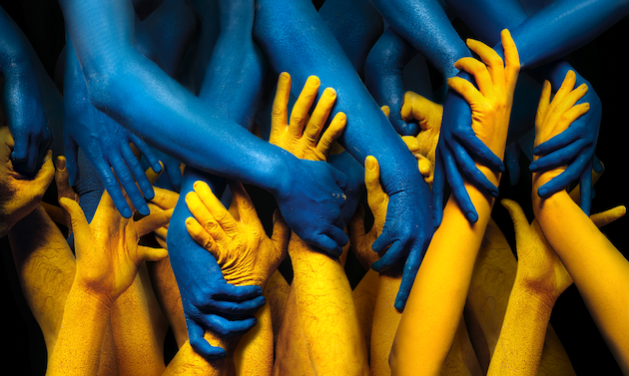 Ukrainian artist Mykola Zhuravel has used art to communicate the horrors of war since Russian’s occupation of Crimea in 2014.

New Delhi, Sep 6 2022 (IPS) - “I must say that I had a premonition of a war with Russia in 2014 when Russian troops had started to occupy Crimea,” said Mykola Zhuravel, a contemporary painter and sculptor, in an interview with IPS. Zhuravel, with his partner, Daria Tishchenko-Zhuravel, have used art to communicate and express the horrors of the war since 2014.

Their work has been presented at the Viennese Biennale, and they have exhibited a multimedia project titled Invasion Redux, which is poignantly used to transform their memories of the 2014 uprising and its aftermath into vivid abstract portrayals – artworks, sculpture, photography and films. 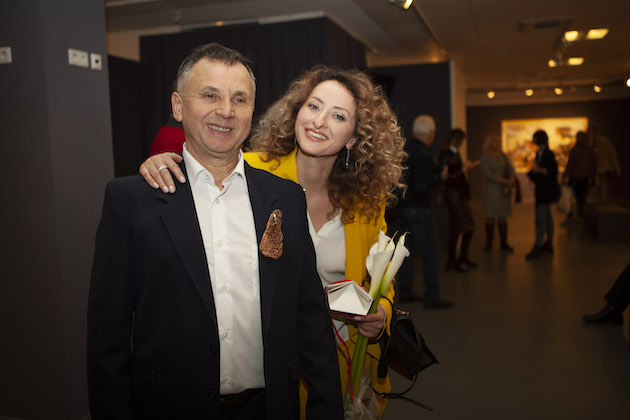 For many, war and displacement in Ukraine began almost eight years ago, when Russia first started to invade Crimea, warning of a full-scale war and vast troop buildup near the Ukrainian border. They use their art as a mirror of Ukrainian resistance, “the invasion project is my reflection, as an artist on the tragic events associated with Russian aggression, where I showed the true image of the occupier through an artistic lens,” said Zhuravel.

Invasion Redux was first presented in 2016 in New York at the Ukrainian Institute of America, showcasing surreal images of “an invader and an occupier”, their aim to show a mass audience “the truth and warn them of the imminent dangers not only to Ukraine but the entire western world with a nuclear strike,” said Tishchenko-Zhuravel.

“Until this terrible war that began in 2022, I lived with my family in Kyiv, we had a studio in the city centre, and as a photographer, I regularly held photo shoots and worked on art projects. But in just one moment, our whole life seems to have turned upside down. The war took away our dream, everything that we built,” Tishchenko-Zhuravel said.

On February 24, 2022, the world watched as Russia started its invasion of Ukraine, attacking the country from the north, south and east and surging troops towards the capital Kyiv making it Europe’s worst conflict since World War II. Almost 193 days later, the magnitude of the ongoing conflict has “wrought death on a mass scale, displaced hundreds and thousands of Ukrainians and forced millions to leave the country.”

Zhuravel said the morning of February 24 was a day when he and his family went into a state of shock, something they are yet to recover from. They had little time pack their bags and move to a safer spot. 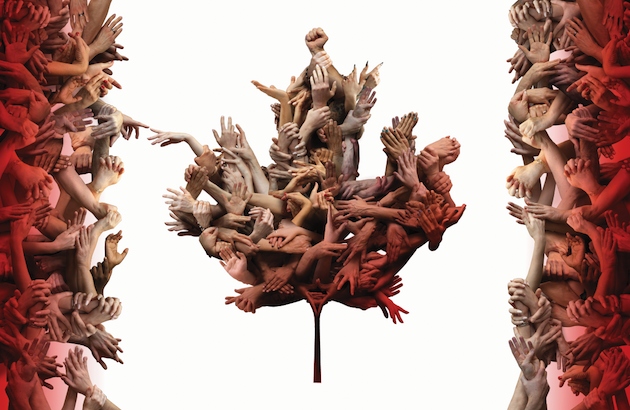 “It was a horror. That morning there were cannon shots being hit on Kyiv, sirens echoed through the city, and people were rushing to hide in bomb shelters,” Zhuravel says. “We had less than an hour to pack our lives in one suitcase and leave. We started by heading to the west of Ukraine, and from there on, it has been quite a journey till we found our way to Canada.

“We didn’t know how to react, but the instinct of self-preservation worked, and we then left for the west of Ukraine, crossed the border with Poland and then flew to Canada. All I took was a small suitcase, a camera, years of experience and faith that everything would be fine,” added Tishchenko-Zhuravel.

From the beginning of the Russian invasion of Ukraine, Ukrainians have found ways to respond to the war, as reported here by TIME. The opposition included mass protest rallies with blue and yellow flags in the cities where Russian forces had already entered; unarmed civilians blocked roads and lay on the ground in front of Russian tanks, and girls threw Molotov cocktails at Russian military vehicles from car windows. Women hit enemy drones with jars of pickled tomatoes, and civilians united to help Ukrainian soldiers and their fellow citizens affected by the war. The steadfastness of Ukrainians in defence of their country surprised many, and their resistance continued even when they had to leave the country.

In April 2022, the Zhuravels held their first exhibition in Canada to continue telling the Ukraine story. The Canadian National Exhibition Association presented Invasion Redux at the CNE’S Withrow Common Gallery in Canada, through which Zhuravel says he will “continue telling the world truth about the military conflict through his artistic images and means as well as continue to glorify Ukrainian culture in Canada and rest of the world.” 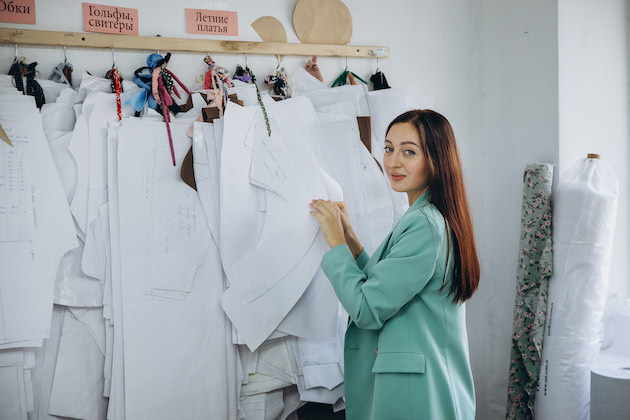 The war also threatened another artist’s life, a fashion designer working with her team in Kherson, a port city in the south of Ukraine. Dasha Smovzh, the founder of Virna, a clothing brand that employed many local Ukrainians and designers, had to flee when Russian troops bombed her city.

“We lost everything, Kherson, which is now almost occupied by the Russian army. We simply had to leave. We just packed our bags, kept our work documents, took cash and ran away as far as we could from the war,” Dasha Smovzh said.

According to this report, until the war in Ukraine began, a generation of Ukrainian brands flourished in recent years as trade with Europe had eased. However, The World Bank has now estimated the Russian invasion to shrink Ukraine’s economy by 45 percent this year.

Like many others, Smovzh had to pause production as many factories were destroyed and shipments were delayed. 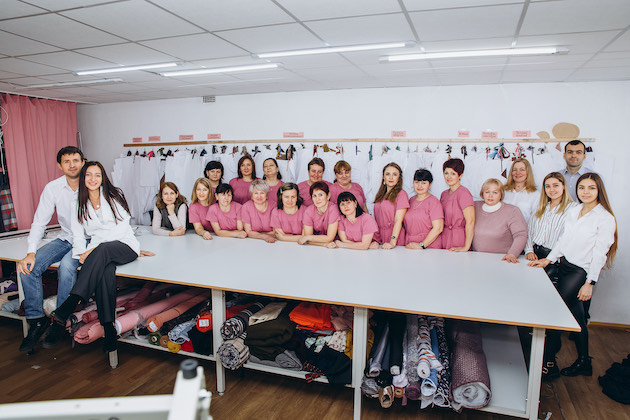 Dasha Smovzh with her team at Virna production house.

“All our family, relatives, and employees are still in Kherson. They have no work. They are struggling due to the ongoing bombings and attacks; sometimes, they have to turn off water and electricity. We did move a few of our clothes to storage and are trying to resume selling again now. None of it is easy or done in the usual way.

“My husband and two-year-old son are safe here in Canada, and we are grateful to the country for their support and opportunity. I can only hope that I can bring Ukrainian culture and beauty here in Canada. Kherson is our home, and I hope we can go back someday.

The uncertainty and fear brought by the war have threatened and impacted lives in ways one can imagine – splitting families and stranding many in Ukrainian war zones. At the same time, others escaped to other countries across or across Europe to seek safety. Human Rights Watch has documented cases of Russian military forces committing laws-of-war violations against civilians in occupied areas of the Chernihiv, Kharkiv and Kyiv regions of Ukraine, including repeated rapes, unlawful violence and threats against civilians.

The large-scale displacements being seen could have lasting consequences for generations to come. By early August 2022, more than 6.6 million refugees from Ukraine had been recorded across Europe, and 10.3 million people, mostly women and children, had crossed borders from Ukraine to the neighbouring countries in the European Union. More than 5 million children need humanitarian assistance. This requires an immediate and steep rise in humanitarian needs. The United Nations estimates that 12 million people inside Ukraine will need relief and protection. At the same time, more than 4 million Ukrainian refugees may continue needing protection and assistance in neighbouring countries in the coming months.