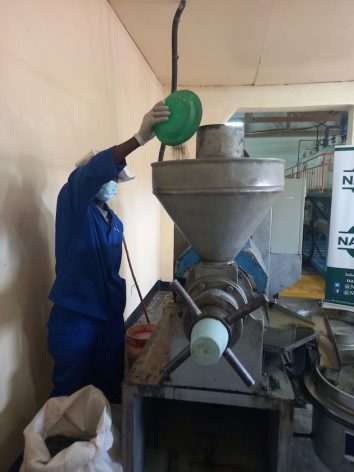 Blantyre, Sep 5 2022 (IPS) - Having harvested and graded their sunflower crop instead of taking it to market, every member of Zikometso Productive and Innovation Centre (IPC) brings their produce to the factory for cooking oil production. The IPC falls under the National Smallholder Farmers Association of Malawi (Nasfarm).

The rising cost of cooking oil in the country and the world, mainly due to the Russia and Ukraine war, means they are fetching more than twice what they could get by selling it to vendors.

According to the factory’s production manager Regina Nothale, three kilograms of sunflower produces one litter of cooking oil.

Currently, one litre of cooking oil in Malawi is sold at an average of K3 000, equivalent to three US dollars.

“The price of sunflower seed on the market per kilogram is at K300 (0.3dollars) hence more money after processing it into cooking oil and more money to the farmers as well,” she said.

Apart from sunflowers, these farmers also grow chillies and take these to the chilli sauce factory in Mulanje district, under the same Zikometso IPC.

The two enterprises benefit 3,726 farmer members from Phalombe, Mulanje and Thyolo districts situated in the southern region of Malawi.

Before she became a member, Annie Muchawa of the Phalombe association said she faced challenges with her chilli and sunflower production.

The challenges included a lack of access to good seeds making her production low and the quality poor.

And if this is not enough, she sold her products at a low price.

“Now we have access to quality seed, and each and every year, we are assured of good prices, and we are no longer the same.

“I am able to pay school fees for my two children, I have managed to construct a modern electrified house, and I have bought livestock for agriculture diversification and nutrition security,” she explained.

At the association, the farmers are trained with better husbandry practices to harvest better yields of high-quality fit for cooking oil and chilli sauce production.

Instead of getting less than 1 US dollar per kilogram after selling her chilli to vendors, the same weight fetches Rose Ndalama of the Mulanje association 2.5 US dollars at the factory.

“At the association, we also have adult literacy education; we learn about conservation agriculture, composite manure making and gender issues. We are benefiting a lot,” she said.

Chinyamunyamu highlighted that the cooking oil factory has not yet been certified by the Malawi Bureau of Standards (MBS); therefore, the product is only available locally despite its quality.

She said the organisation was working hard to ensure the factory gets certified by the end of the year and increase its capacity to over 40 000 litres per year.

“We started piloting value addition at farmers level hence the establishment of two factories, one in Phalombe district for cooking oil production and another in Mulanje district for chilli sauce production. This was done with aid from the government of Norway because we saw that if the processing takes place within the vicinity of the farmers, they will benefit a lot.

“We are happy to see that both factories have grown significantly, and by next year, the production will increase as well,” she said

Struggling to get certified is one of the challenges that cooperatives and associations meet in the country.

Peter Ngoma, President of the Oil Seed and Processors Association, said many cooperatives and associations face low production levels due to limited access to productivity-enhancing technologies such as certified seeds, equipment and materials.

“Zikometso is lucky to have the funders. The body does the production process and guides and provides quality seed for farmers. Their part is to produce the crop and deliver it to the factory. Other groups do not even have access to affordable credit facilities to invest in the business.”

“This, in the end, leads to poor compliance to quality standards and consistent qualities required by the buyers,” he said

However, Ngoma said while the association offers off-take agreements, which include providing inputs to farmers, this was negatively affected by the lack of contract enforcement laws. As a result, there is a lot of side selling, farmers not supplying agreed quantities, and poor-quality commodities.

The president added that the Oil Seed and Processors Association supported farmers with extension services which assist with good agricultural practices.

During his tour to review the progress of reforms two months ago, Malawi’s Vice President Saulos Chilima visited the Kasenge cooperative of Chitipa district in the northern region of Malawi, which produces cooking oil from sunflower.

He noted that the time had come to invest in local industry because the country has been wasting foreign exchange on the importation of cooking oil instead of empowering local production.

“Local cooking oil production is a good story, and we need to boost their capacity.

“Personally, I will engage other potential investors to look at this,” he promised.
IPS UN Bureau Report