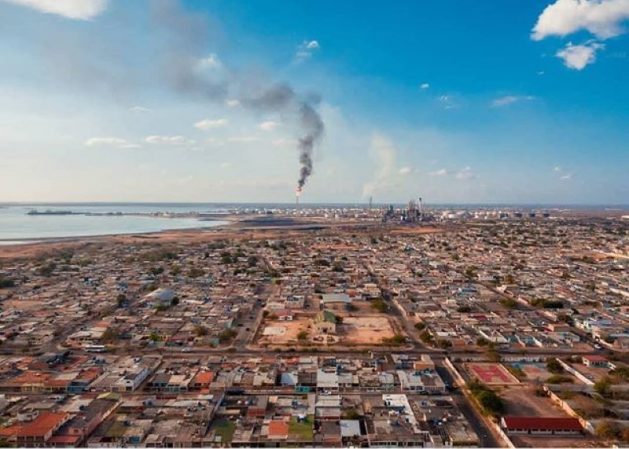 A partial view of the city of Punto Fijo, with the Cardón refinery in the background, on the Paraguaná peninsula, projected as a special economic zone overlooking the Caribbean in northwest Venezuela. CREDIT: Megaconstrucciones

CARACAS, Sep 3 2022 (IPS) - Venezuela is preparing to replicate the experience of Special Economic Zones (SEZs), a mechanism with which more than 60 countries have tried to draw investment and accelerate economic growth, while under its avowedly socialist government a “silent neoliberalism” is gaining ground.

The aim of the SEZs is “to provide special conditions to gain the economic confidence of investors from all over the world, and productive development to put an end once and for all to oil rentism,” said President Nicolás Maduro when he promulgated the Organic Law of Special Economic Zones on Jul. 20.

The SEZs, “90 percent of which are in the global developing South, are a catalyst for economic restructuring processes and go hand in hand with the expansion of the neoliberal economy,” sociologist Emiliano Terán, a researcher with the non-governmental Venezuelan Observatory of Political Ecology, told IPS.

According to the United Nations Conference on Trade and Development (Unctad), there were 5,383 SEZs in the world in 2019 and another 508 under construction, of which 4,772 were in developing countries – 2,543 in China alone and 737 in Southeast Asia.

In Latin America and the Caribbean there were 486 – 73 in the Dominican Republic, some 150 in Central America, seven in Mexico and 39 in Colombia.

SEZs are mainly commercial, such as free ports or free trade zones, where import quotas, tariffs, customs or sales taxes are eliminated; industrial, with an emphasis on improving infrastructure available to companies; urban or mining ventures; or export processing.

Their main characteristic is that, in order to stimulate investment, especially foreign investment, there are more flexible regulations on taxes, investment requirements, employment, paperwork and procedures, access to resources and inputs, export quotas and capital repatriation. 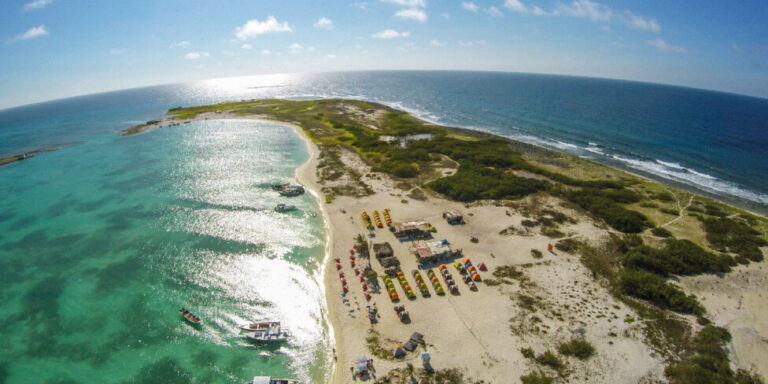 One of the camping areas improvised by tour operators on La Tortuga, an island with no permanent population where tourist developments are being planned that are triggering environmentalist alarms, as they may severely affect the still almost pristine ecosystem of the island and its surrounding Caribbean waters. CREDIT: Jorge Muñoz/Aleteia

An eye on the environment

In Venezuela, the first five zones decreed are the arid Paraguaná Peninsula, in the northwest; Margarita Island, in the southeastern Caribbean; La Guaira and Puerto Cabello, which are the largest ports, along the central portion of the Caribbean coast; and the remote La Tortuga Island, some 200 kilometers northeast of Caracas.

Puerto Cabello and La Guaira are essentially ports for imports to the populated north-central part of the country, whose main exports, oil and metals, are shipped from docks in the production areas in the east and west.

Hotel complexes, airports, marinas and golf courses are being planned for La Tortuga, which covers 156 square kilometers and has no permanent population. Environmental groups warn that its waters, reefs and the island itself are home to five species of turtles, 73 species of birds and dozens of species of fish and cetaceans. 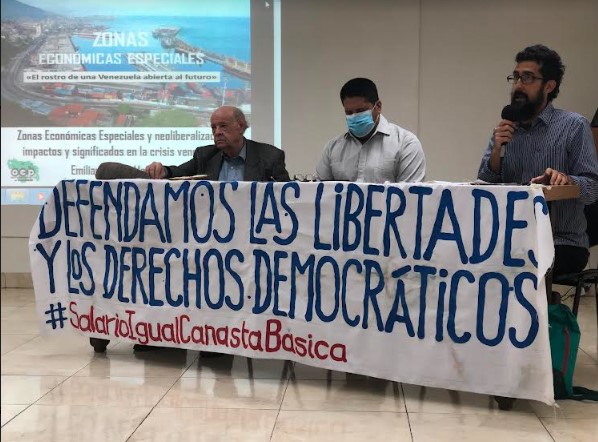 “The environmental issue is a concern, but it is hard to believe that the government has the resources or the investors for the number of hotels planned for La Tortuga,” economist Luis Oliveros, a professor at the Metropolitan and Central Universities of Venezuela, told IPS.

The decreed Venezuelan SEZs “seem more like announcements than realities, and although we like the government to think of growth and development hand in hand with private investment, much more is needed. It has yet to be clarified what exactly the government is pursuing with these zones,” Oliveros said.

In Venezuela “creating SEZs has limitations, such as the sanctions (imposed by the United States and the European Union) and the need to generate macroeconomic stability and legal certainty, which are pending issues,” he added.

After seven years of sharp decline – and three years of hyperinflation – Venezuela’s annual gross domestic product, which exceeded 300 billion dollars a decade ago, now stands between 50 and 60 billion dollars, according to economists.

Oil production, the main lever of the economy and source of tax revenues, has shrunk and is starved of new investments, while the State desperately seeks income by exporting crude oil at a discount or selling gold that is extracted at the cost of great environmental damage in the southeast of the country.

Attracting investment may be an uphill struggle for SEZs that have still not been fully mapped out, considering that, for example, major companies have not knocked on the door to raise oil production – 600,000 barrels per day when a decade ago it was three million – despite the favorable signals sent by the United States.

Since March, informal contacts between Washington and Caracas, prompted by the impact of the war in Ukraine on the world energy market, have explored, without success so far, easing sanctions and other measures to bring Venezuela back to the U.S. oil market with new investments. 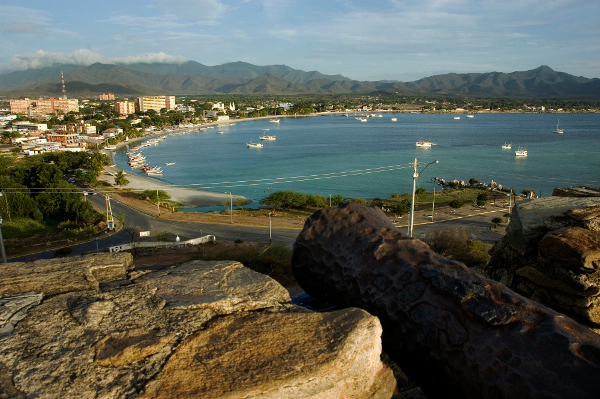 Juan Griego Bay in the north of Margarita Island, already half a century old as a sales tax-free zone and tourist mecca for Venezuela’s middle class, is now one of the country’s five special economic zones. CREDIT: Mipci

In the southeast of the country, an area rich in gold, iron, diamonds, coltan and other minerals, the 112,000 square kilometer Orinoco Mining Arc (larger than Bulgaria, Cuba or Portugal) was decreed in 2016 as a “strategic development zone”, and its control and management was handed over to the armed forces.

The Mining Arc “has been a precedent for a new model promoted by the State to attract investments, but with depredation of the environment and restriction of wages and workers’ rights,” warned Luis Crespo, professor of Economics at the Central University of Venezuela, during a forum at that university.

“The special economic zones are part of a silent neoliberal adjustment plan driven forward by the government of President Maduro,” said Crespo.

The Venezuelan SEZ law – enacted by the legislature, which has been boycotted by most of the political opposition – states that its purpose is to develop a new production model, promote domestic and foreign economic activity, and diversify and increase exports.

It also aims to promote innovation, industry and technology transfer, create jobs and “ensure the environmental sustainability of production processes.”

The terminology about socialism or transition to socialism, frequent in the political discourse of the government and the ruling United Socialist Party, is absent from the legislation of the SEZs and from the repeated calls for private capital.

“The example of China is being followed, as it is by other countries, in using the SEZs as a showcase for heterodox forms of capital accumulation, in a process of progressive neoliberalization of the economy, as the oil model of production and distribution of wealth is being exhausted,” Terán said.

He added that “the SEZs cannot be seen only in terms of macroeconomic indicators,” as they become “zones of social and environmental sacrifice, with a new political geography of dispossession, and with the cheapening of labor, especially that of women workers.”

According to UNCTAD, although there are differences in SEZs from one country to another and within countries, their common features include having a clearly defined geographic area, a regulatory regime that is distinct from the rest of the economy, and special infrastructure support for the development of their activities. 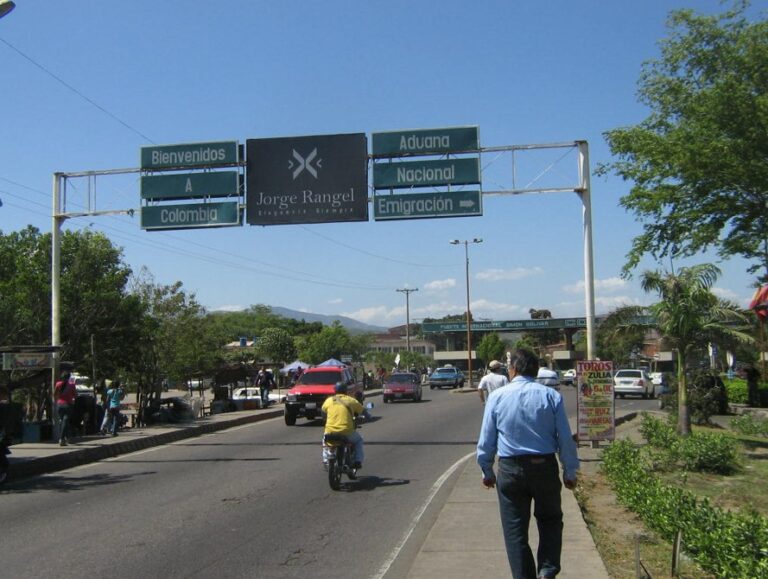 A view of the border crossing between Colombia and Venezuela over the Simón Bolívar Bridge (in southwest Venezuela and northeast Colombia), when there was free transit and intense activity before the border was closed and relations between the two countries broke down. Now Caracas proposes to create a binational special economic zone in the area. CREDIT: Humberto Márquez/IPS

Venezuela’s SEZs will be guided by a council to be freely appointed by the president, each will have a single authority to be named by the president, and the decree establishing one of the zones must be considered by the legislature within 10 working days or it will be approved, without discussion.

Areas such as the SEZs, the Mining Arc or special military zones in practice modify the political-administrative division of the country, which only in theory is a federal republic with 23 states plus a capital district.

In another political move, on Aug. 23 Maduro publicly proposed to his new Colombian counterpart, leftwing President Gustavo Petro, who took office on Aug. 7, the creation of a special binational economic zone between southwestern Venezuela and northeastern Colombia.

“We are going to propose to President Petro the construction of a large economic, commercial and productive zone between the department of Norte de Santander (Colombia) and the state of Táchira (Venezuela),” Maduro said.

Diplomatic, political, commercial and transit relations between the neighboring countries have been severed since February 2019.

In Táchira, business spokespersons have expressed their support for this Andean state of 11,000 square kilometers to obtain special regimes that favor trade with the neighboring country, and their peers in Colombia are betting on a recovery of bilateral trade, which prospered until the first decade of this century.

Terán described the projected creation of the SEZs as a possible “new pact of elites in Venezuela,” after more than 20 years of acute political confrontation, but warned that “there is an alternative, because although fragmented, dispersed and with a new look, protests against these pacts have never ceased.”