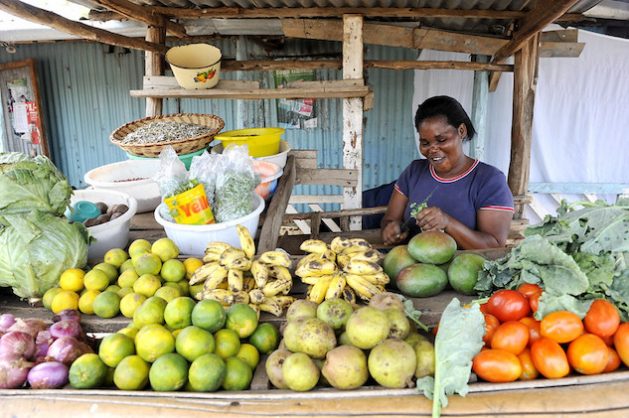 Women’s financial exclusion in Kenya is not only a matter of having an ID or a chauvinist husband but is about financial institutions’ attitude to women.

Nairobi, Sep 27 2022 (IPS) - A two-year-old child cries hysterically as his mother attends to customers standing in front of her stall to buy vegetables on the outskirts of the Kenyan capital Nairobi. The mother, 25-year-old Esther, who refuses to give her surname for fear her husband will know that she has spoken to strangers about family issues, sells spinach, onion, tomato, garlic, and green pepper at a street corner to supplement her husband’s “meager” construction wage. It has been four years since she started the business, and she says it is beginning to feel like an eternity.

“I might be a village girl, but I have big dreams and ambitions, which unfortunately are being hampered by my selfish husband,” the rural-born, uneducated woman tells IPS through a translator.

“I’m tired of selling on the streets, it’s very cold here, and sometimes it’s windy and hot. I need to rent a small shop and turn it into a convenience store that will sell anything from cigarettes and cold drinks to milk. But there are some important obstacles to overcome,” she explains.

Esther does not have an identity document (ID), which represents the first obstacle to her dream coming true. According to a FinAccess February 2022 report published by Financial Sector Deepening (FSD) Kenya, 87% of the people in this East African nation without ID in 2021 are between 18 and 25, compared to 69% in 2019. There is the highest incidence of lack of national identity cards in Kenya’s rural areas, mostly among women, and that has more than doubled since 2019, says the report.

It would appear that even if Esther had an ID, her husband would not allow her to get a loan due to Kenya’s misogynistic and patriarchal mentalities that put men in control of all household’s financial decisions.

“My husband says he is the boss of the family, and therefore he must manage all the money that comes in and advises how it is spent. All he knows is to count my money every evening, I don’t see his pay slip, and I totally ignore how much he earns, except to tell me that he earns very little and that my business is vital to support his income to help pay the bills,” Esther says emotionally, looking from left to right for signs of her husband’s return from work.

Many observers believe that women’s financial exclusion in Kenya is not only a matter of having an ID or a chauvinist husband, but it is also about financial institutions’ unfriendliness towards impoverished women like Esther and her neighbor Fridah.

“Who’s going to lend money to people like us? I knocked on all doors, but nobody helped me apparently because I’m not qualified for a loan. I’m stuck here for the rest of my life with this business of selling fried fish on this street corner. Men are moving fast forward, while women remain static. It’s complicated for us in this country,” Fridah, a widow of four children, says.

A man identified only as Rasta says: “The problem with today’s women is that when she starts making more money than you, she becomes rude, disrespectful, and arrogant. Then one day, when you wake up, she tells you she wants a divorce. That’s totally un-African.”

Another man sitting nearby intervenes, blaming the white people for brainwashing African women about gender equality. “There’s no such thing in our culture and traditions. Financial inclusion for women, or whatever you call it, it’s sheer nonsense. Not in my house. I’m in charge of everything, and it stays that way.”

The US-based Center for Financial Inclusion (CFI) says without gender norm transformation, it is unlikely that women’s financial inclusion will lead to meaningful economic empowerment.

“It is time to move away from gender-blind or gender-aware approaches to financial services toward a gender-transformative approach that explicitly creates gender-equal financial systems by embedding pathways for engagement on equal terms,” it points out.

“Access to finance is one path to economic empowerment. Yet, women are disadvantaged in many ways, hindering their ability to access value-adding finance. For instance, on average, women are less educated than men, earn less income, and own fewer assets which makes them less likely to be considered or targeted in design of finance solutions,” state Wanza Mbole Namboya and Amrik Heyer, two financial inclusion specialists of FSD Kenya, in an analysis published in March 2022.

Approached for comment, a Washington-based spokesperson for the International Financial Corporation (IFC) said: “Gender equality and economic inclusion are essential for economic growth and development. No country, community, or economy can achieve its potential or meet the challenges of the 21st century without the full and equal participation of women and men, girls and boys.

“Advancing economic inclusion means creating an economy that works for everyone. An inclusive economy ensures that all parts of society, especially poor or socially disadvantaged groups, regardless of their gender identity, sexual orientation, place of birth, family background, racial identity, age, ability, or other circumstances, over which they have no control, have full, fair, and equitable access to market opportunities as employees, leaders, consumers, business owners, and community members.”

The Gender Global Gap Index 2022 published in July, which ranks Sub-Saharan Africa sixth (67.9%) in terms of regions that have closed their gender gap, says it will take the region 98 years to fully close its gender gap. Kenya ranks a distant 57th in the report, which puts Rwanda (6th globally) and Namibia (8th) top in Africa in closing the gender gap. South Africa emerged 20th.

Furthermore, the report deplores the rise of gender gaps in the workforce, describing it as “an emerging crisis”.

As if cultural norms, identification issues, and lenders’ unfriendliness towards women were not enough to suppress women’s financial independence and economic participation in Africa, there seems to be a bunch of men who want to make sure that sexual favors become a sine qua non condition for women’s advancement in the workplace.

Claire, who learned it the hard way, recounts: “I worked for 10 years for this company but never got promoted, let alone get a pay increase. But my male colleagues, whom we have the same level of education and who joined the company after me kept moving forward in all aspects.

“My boss told me face to face over and over again that unless I start sleeping with him, I’ll stay in that same position forever. I was shocked but never gave in to his demands because I’m different from other women who sell themselves to indecent rich men for a pay rise or a higher position.”

She ended up quitting and got another job. Asked if it even crossed her mind to open a case of sexual harassment against her former boss, she replies: “Which judge is going to believe me? Where is the evidence? At some stage, I thought of taping our conversation, but I told myself it is no use.

“Besides, these people are rich and powerful and have political connections. Their lawyers will tear you apart in one minute; who is going to defend me? I just made the right decision to leave peacefully but empty-handed, forget everything and get on with my life.”

The Global Gender Gap Report 2022 says: “Gender gaps in the workforce are driven and affected by many factors, including long-standing structural barriers, socioeconomic and technological transformation, as well as economic shocks.

“Globally societal expectations, employer policies, the legal environment, and the availability of care continue to play an important role in the choice of educational tracks and career trajectories,” it says.