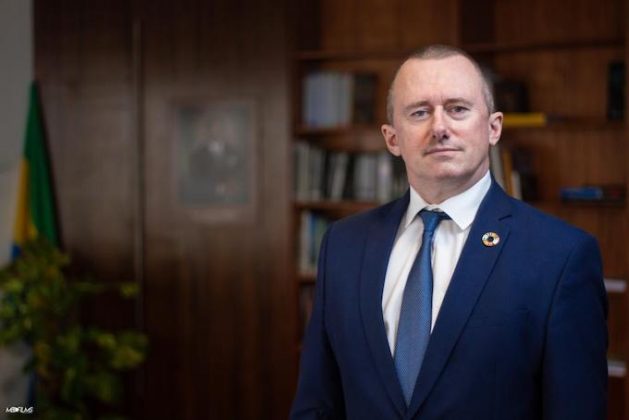 Libreville, Oct 18 2022 (IPS) - Over the past few years, Gabon has been successful in its forest conservation efforts. The country has also been able to work hard to achieve the goal of limiting the rise in global temperatures to the 1.5-degree target. Minister of Water, Forests, the Sea, and Environment, Lee White, talks to IPS Correspondent Francis Kokutse:

IPS: Gabon is being touted for its success story in forest conservation. When did this begin, and what are the results so far?

Minister Lee White (LW): In 1972, the late President Omar Bongo went to Stockholm for the first major political summit on the environment. On his return, he created a Ministry of Environment. After Rio in 1992. He signed Gabon’s first environmental law in 1993 and initiated a review that led to the new forestry law in 2001 – which made sustainable forestry obligatory. In 2002 at the World Summit on Sustainable Development (WSSD) Rio plus 10, he announced the creation of 13 National Parks covering 11% of Gabon. This led to the National Parks Law of 2007, which created the National Parks Agency (ANPN). In 2006/ 2007, he also created six Ramsar (wetland) sites.

In 2009, President Ali Bongo Ondimba was elected on a Gabon Green – Gabon Industrial – Services Gabon – platform: a sustainable development manifesto. He further developed his collaboration with the Prince of Wales (now King Charles III) and attended the climate COP in Copenhagen, where he represented forestry in Africa in the small group of 20 Heads of State and Government who wrote the Copenhagen Agreement. He subsequently strengthened ANPN, increasing staffing and budget levels ten times, created our Climate Council, the Climate Plan, the Plan Strategic Gabon Emergent (PSGE) sustainable economy plan, the Gabonese Agency for Space Studies and Observation (AGEOS) to monitor forests and 20 marine protected areas covering 27% of our Exclusive Economic Zone (EEZ) – extending our forest conservation and management model into the ocean. As a result, we have had five decades of deforestation below 0.1%/year (closer to 0.05%) and are the country net absorbing the most CO2, over 100 million tons annually.

IPS: The conservation efforts surely have some problems. What were these?

LW: Two types of problems – one is external – cross-border poaching, especially for ivory, by organised criminal groups; the same for illegal gold mining; illegal pirate fishing boats; illegal forestry – sometimes cross-border. So, this has to be fought with strong, motivated, professional armed rangers. Gabon has been successful – while forest elephant numbers across the region have fallen by 70%, in Gabon, they went from 60,000 in 1990 to 95,000 in 2020.

The other is internal: Human-elephant conflict (is complex, but basically, there are more elephants; poaching in remote forests drives them toward people, and climate change has resulted in less fruit in the rain forest, and even in parks (so) the elephants are thinner today than they were 30 years ago. (As a result) hungry elephants are leaving the forests to feed on crops. This is on the rise and erodes the support of the Gabonese people. Also, when the economy is tight, as it has been since 2015 – the Government is able to spend less money on the parks.

IPS: Gabon has benefitted from its efforts with increased Carbon Credits. What has this come to?

LW: We signed an agreement with Norway for results-based payments of up to 150 million US dollars, of which we have received 17 million US dollars to date. This is a modest amount of funding. But will allow us to better manage the forest and thereby generate more credits in the future. Just yesterday (October 3, 2022), we got notification from the United Nations Framework Convention on Climate Change (UNFCCC) of the validation of 187 million tons of REDD+ credits . . . which will be made official next week. All pre-Glasgow COP 26 REDD+. Carbon credits are voluntary, so there is a guarantee we will be able to sell them. We have a first offer to buy about 100,000 tons at $30 . . . so the real answer to your question is that we will see over the next 2-3 years what this will come to.

IPS: How will ordinary people benefit from all these efforts?

LW: My expectation is that in the post-Glasgow world, Gabon will generate 100 million tons of net sequestration carbon credits per year and sell them for a price of $20-30. These funds will be distributed as follows: 10% reinvested in forest management; 15% for rural communities; 25% for the Sovereign Fund to reinvest for future generations; 25% to service Gabon’s debt load; 25% in the national budget for education, health, and climate resilience . . . the funds will make our economy more viable and resilient and reduce our debt servicing payments making more money available for the Gabonese people.

IPS: Have these forest conservation efforts led to the relocation of ordinary people? If so, what was done to them?

LW: Never, no – this is not our policy. We have a small population – about 200 people – who live within the parks. We map out their traditional areas and formalize their rights in our park management plans.

IPS: The more you try to conserve the forest, the more you increase the animal population, is that not opening up the country to zoonotic diseases?

LW: No – the wildlife in the parks is in equilibrium – it is when you cut the forests and animals come into contact with people that there is a risk of cross infection – as a general rule, if nature is healthy, so are people.

IPS: Media reports say the country’s elephant population has increased dramatically. Has that also not affected farming, and what is the Government doing to save farms?

LW: I mentioned that human-elephant conflict is higher. This year we are investing about 10 million US dollars in compensation and building electric barriers to protect peoples’ crops.

IPS: With Gabon’s success so far, what is the country presenting at COP27?

LW: We will present our 187 million carbon credits to the world. We will also present our model of exploiting the forest in a sustainable manner to save the forests. In general terms, this is a Conference of Parties (COP), where negotiators are progressing. Not concluding negotiations – so the focus will be more on thematic issues.

IPS: How can other African countries learn from Gabon’s experience?

LW: I believe our forestry model – banning export to promote local jobs and the local economy can work for Congo Basin countries. Also, our national carbon accounting in different ecosystems could be applied in many African countries, not just rainforest countries, to create nature-based carbon credits in the future.

IPS: What has been the response from other countries in the Congo Basin on what Gabon is doing so far?

LW: Thus far, it is probably fair to say their response is a “wait and see” response – they are interested but not yet convinced it will work. That said, Central African Economic and Monetary Community (CEMAC) countries have announced they will follow Gabon’s example and ban log exports from January 1, 2023.

What is the future of Gabon’s conservation effort?

LW: Time will tell. We are a member of the High Ambition for Nature and People Alliance, pushing for a global standard of 30% protected lands and oceans by 2030 – in Gabon, we are currently at 21% on land and 27% in the ocean.

It is my belief that if we can continue the transition in the forestry sector towards 3rd and 4th level transformation and if a global carbon market emerges to reward Gabon’s net carbon sequestration that the wise and sustainable use and conservation of natural resources in Gabon can become a sustainable model, such as is the case in Costa Rica.