UNITED NATIONS, Oct 31 2022 (IPS) - A war of words between Russia on the one hand, and the US, Britain, France and Germany on the other—specifically on the deployment of drones in Ukraine — has triggered an unintended consequence: a new world food crisis.

The Western powers last week asked the UN to verify whether Iranian drones were being used “illegally” in violation of the 2015 Security Council resolution 2231 which endorsed the Joint Comprehensive Plan of Action (JCPOA) on Iran’s disputed nuclear programme.

But Iran has denied it had supplied Unmanned Aerial Vehicles (UAVs)—or drones– to Russia. So have the Russians.

He also warned UN Secretary-General Antonio Guterres and his staff not to engage in any “illegitimate investigation” of drones used in Ukraine.

And Russia pushed back further — and said it will re-consider its cooperation with the UN on the Black Sea Grain Initiative, thereby barring Ukraine grain exports.

As expected, Russia pulled out of the deal threatening food security worldwide. 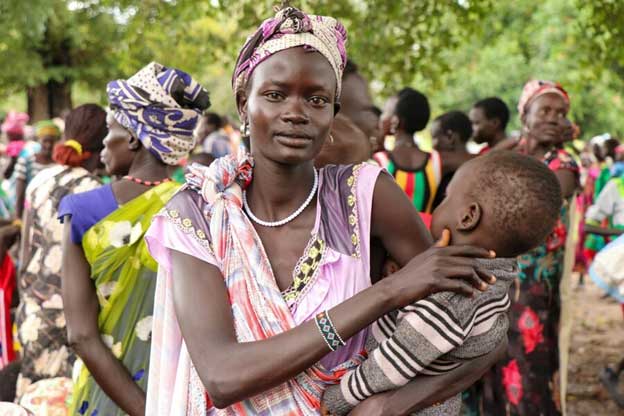 The world is facing a global hunger crisis of unprecedented proportions – we are at a critical crossroads. Up to 50 million people in 45 countries are on the brink of famine, says WFP. Credit: WFP/Eulalia Berlanga in South Sudan.

As of October 30, the total tonnage of grain and food stuffs moved from Ukrainian ports. under the Initiative, was 9.6 million tons.

UN Spokesperson Stephane Dujarric said October 30 that the Secretary-General “is deeply concerned about the ongoing situation regarding the Black Sea Grain Initiative”.

“The Secretary-General continues to engage in intense contacts aiming at the end of the Russian suspension of its participation in the Black Sea Grain Initiative”, he added.

As a result, she pointed out, food prices across the world will increase and people, especially in sub-Saharan Africa, will suffer the most.

“There will likely be food riots and increased malnutrition,” she predicted.

The Russian war against Ukraine, she argued, demonstrates that our global food systems are fragile.

“What we need are more local and regional food and input production to ensure food security”, said Nierenberg, whose non-profit organization aims at reforming the food system with the goal of highlighting environmentally, socially, and economically sustainable ways of alleviating hunger, obesity, and poverty.
www.foodtank.com

The President of Ukraine Volodymyr Zelensky is quoted as saying that Russia has been “deliberately aggravating” the world’s food crisis.

“Russia is doing everything to ensure that millions of Africans, millions of residents of the Middle East and South Asia, will find themselves in conditions of artificial famine or at least a severe food crisis”.

The world has the power to protect people against this, he declared.

Since Russia’s invasion of Ukraine, beginning February 2022, exports of grain from Ukraine, as well as food and fertilizers from Russia, have been significantly hit, according to the United Nations.

“The disruption in supplies pushed soaring prices even higher and contributed to a global food crisis. The Black Sea Grain Initiative, brokered by the United Nations and Türkiye, was set up to reintroduce vital food and fertilizer exports from Ukraine to the rest of the world.”

Ukraine, one of the world’s largest grain exporters, normally supplies around 45 million tonnes of grain to the global market every year but, following Russia’s invasion of the country, mountains of grains built up in silos, with ships unable to secure safe passage to and from Ukrainian ports, and land routes unable to compensate, the UN said.

“This contributed to a jump in the price of staple foods around the world. Combined with increases in the cost of energy, developing countries were pushed to the brink of debt default and increasing numbers of people found themselves on the brink of famine.”

On 22 July, the UN, the Russian Federation, Türkiye and Ukraine agreed the Black Sea Grain Initiative, at a signing ceremony in Türkiye’s largest city, Istanbul.

The deal allowed exports from Ukraine of grain, other foodstuffs, and fertilizer, including ammonia, to resume through a safe maritime humanitarian corridor from three key Ukrainian ports: Chornomorsk, Odesa, and Yuzhny/Pivdennyi, to the rest of the world.

To implement the deal, a Joint Coordination Centre (JCC) was established in Istanbul, comprising senior representatives from the Russian Federation, Türkiye, Ukraine, and the United Nations.

According to procedures issued by the JCC, vessels wishing to participate in the Initiative will undergo inspection off Istanbul to ensure they are empty of cargo, then sail through the maritime humanitarian corridor to Ukrainian ports to load.

The corridor was established by the JCC and monitored 24/7 to ensure the safe passage of vessels. Vessels on the return journey will also be inspected at the inspection area off Istanbul.

Meanwhile, a statement released on October 30 says the UN Secretariat convened all delegations earlier Sunday at the Joint Coordination Centre in a plenary format.

During the session, the delegation of the Russian Federation informed that while it suspends its participation in the implementation of the activities of the Initiative, including in inspections for an indefinite time, it will continue the dialogue with the United Nations and the Turkish delegation on pressing issues.

The Russian Federation also expressed its readiness to cooperate remotely on issues that require immediate decision by the JCC.

The Secretariat, in close cooperation with the Turkish delegation at the JCC, continues to engage all representatives to offer options on next steps regarding the JCC operations in accordance with the goals and provisions stated in the Initiative.

In order to continue fulfilling the Initiative, it was proposed that the Turkish and United Nations delegations provide by October 31 ten inspection teams aimed at inspecting 40 outbound vessels. This inspection plan has been accepted by the delegation of Ukraine. The Russian Federation delegation has been informed.

Currently, there are 97 loaded vessels and 15 inbound vessels registered for JCC inspection around Istanbul. There are an additional 89 that have applied to join the Initiative.

In addition, the Ukrainian, Turkish and United Nations delegations agreed on a movement plan for the maritime humanitarian corridor of 14 vessels, 12 outbound and four inbound.

The UN delegation, in its capacity as JCC Secretariat, has informed the delegation of the Russian Federation on the movements in accordance with the JCC established procedures.

As per JCC procedures, all participants coordinate with their respective military and other relevant authorities to ensure the safe passage of commercial vessels under the Black Sea Grain Initiative.

There was no movement of vessels in the corridor on 30 October. There are currently 21 vessels engaged in the Initiative that are in or near the three Ukrainian ports with a capacity of over 700,000 metric tons, including IKARIA ANGEL, a vessel chartered by the World Food Programme loaded with 30,000 metric tons of wheat for the emergency response in the Horn of Africa, the UN said.

According to the Rome-based World Food Programme (WFP) last month, the world faces a global hunger crisis of unprecedented proportions.

In just two years, the number of people facing, or at risk of, acute food insecurity increased from 135 million in 53 countries pre-pandemic, to 345 million in 82 countries today.

Fuelled by conflict, climate shocks and COVID-19, the crisis is escalating as the war in Ukraine drives up the costs of food, fuel and fertilizers. Millions of people are struggling to put food on the table and are being driven closer to starvation in a storm of staggering proportions.

“We are at a critical crossroads. We need to rise to the challenge of meeting people’s immediate food needs, while at the same time supporting programmes that build long-term resilience”.

“The alternative is hunger on a catastrophic scale,” the WFP warned, long before the current grain crisis.