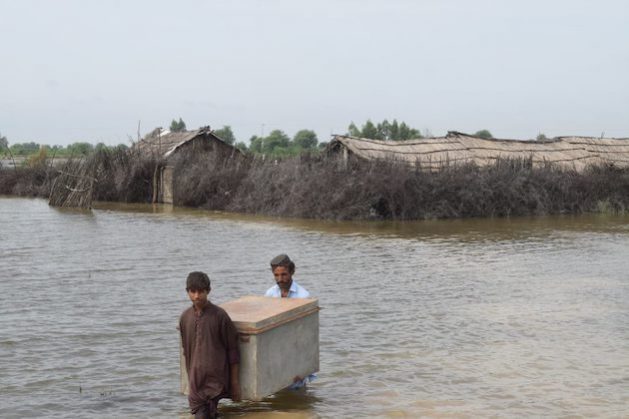 A father and son remove their belonging from their flooded home in Taluka, Shujabad, District Mirpurkhas. Credit: RDF

KARACHI, Jan 18 2023 (IPS) - Terming the recent international donors’ conference held in Geneva a “success” after Pakistan was able to secure 10 billion US dollars, Prime Minister Shehbaz Sharif has promised “every penny” of the pledges will be used towards rehabilitation of flood-hit people.

“It’s looking for an opportunity to take credit for something to try to win back some goodwill,” said Michael Kugelman, director of the Wilson Centre’s South Asia Institute, who found the self-congratulatory messaging purely “political” of a government, which he said, was “weak, unpopular and struggling to rein in a cascading economic crisis”.

Still, he agreed, the Sharif government deserved credit for shoring up so much support in an “era of donor fatigue and global economic stress”.

But in his own country, Sharif’s words have met with much wariness.

Janib Gul Mohammad, a farmer from Fateh Ali Buledi village in Kamber Shahdadkot, one of the worst affected districts in Sindh province, doubted he would even “get a rupee out of the billions of dollars” received on his behalf.

“Our rulers are clueless about how hungry our kids are,” said Mohammad, whose family has had to ration and reduce their consumption of roti (flat bread) from “two to three to just one at every meal”.  He and his family of 13 are among the more than 33 million Pakistanis affected by last year’s unprecedented floods caused by record monsoon rains and the melting of glaciers that killed more than 1700.

Seven months since the rains began, thousands continue to live in open areas, tents, and makeshift homes in Sindh and Balochistan, the two worst-hit provinces stalked by a cold spell, disease and food shortages making life even more perilous. According to the UN, an estimated 5 million people remain exposed to or living close to flooded areas. A post-disaster needs assessment (PDNA) has estimated the damage exceeded 30 bn USD—a tenth of Pakistan’s entire GDP.

The moot, attended by officials in Geneva on January 9, was from over 40 countries and included private donors and international financial institutions.

Reminding that pledges were not commitments, Kashmala Kakakhel, a climate finance expert, said she would like to get a clear distinction between the new money and one that is rebottled to address the impact of floods but doubted the government will “ever tell”.

Although the multilateral funders have been relatively generous, Kugelman said it could be stemming from, in part, “a desire to support the emerging global norm of climate justice”. But, by “only offering pledges, not actual aid, they have given themselves a safety net and a possible way out in case they decide they are not ready to commit to such large figures,” he said,

The pledges made by bilateral donors may seem smaller, said Kugelman, but this could be because they had helped earlier on. Giving the example of the United States, he said it made one of the smaller pledges at the donor’s conference but was one of the most generous bilateral donors since the floods struck.

However, of the 10bn USD pledges, 8.7 billion are loans that the government has “conveniently underplayed”, said Wilson Centre’s expert. And these may take several years to arrive, he added.

Ashafque Soomro, heading the Research and Development Foundation, a Sindh-based nongovernmental organization which had been at the forefront of assisting flood-affected communities, is not sure if getting more loans is a good idea at all. In this critical time of economic crunch, he said, the government should have “built a strong case for climate justice” to get grants instead.

“I am very concerned that the government is not only forcing us further into a debt trap but risks defaulting on repayment.” According to the former finance minister Miftah Ismail, Pakistan owes the world nearly 100 billion USD and has to repay 21bn USD to lenders during the current fiscal year. “We have no resources to repay our lenders. We will just have to try to borrow from one creditor to pay off another,” he wrote in Dawn.

Nevertheless, Soomro said, when the funds do arrive, maximum effort should be made for them to go into livelihood recovery and economic revival – like rehabilitating agricultural land and subsidizing agricultural inputs. This, he said, will generate employment and avert a looming food crisis. At the same time, Soomro said, the aid agencies should ensure their money is spent wisely and smartly to reduce climate disasters.

Kakakhel said she was struck by the finance minister’s statement that to turn pledges into an inflow of money, Pakistan needs to quickly prepare project feasibilities. “Why have an emergency donor conference at all if you are treading the same old traditional path of seeking loans?” she asked.

She further added that, “If 90 percent of the pledges are to be projectized anyway, that means the additional cost associated with climate resilience will also need to be built into the project budgets, inflating the loan amounts. Whether that will actually happen or not is anybody’s guess.”

But even if pledges become commitments, Ali Tauqeer Sheikh, a climate expert, was not sure if Pakistan would be able to put all of it to use, given its “track record on delayed implementation of development projects”. Pakistan, he pointed out, was littered with “more than 1,200 unfinished projects worth Rs1.6 trillion [6.67 billion USD]”.

That is why, said Dr Fahad Saeed, a climate scientist, the government must come up with not only “well planned but out-of-the-box solutions, and quickly”. He suggested investing in models that streamlined philanthropy and involved the private sector and even startups. Decisions made today, he said, needed to be backed by research and science. “Drafting policies inside power corridors or in five-star hotels will not get the desired results; we need to go out, collect evidence and come up with robust solutions to battle climate change.”

Getting down to brass tacks, Lieutenant-General Nadeem Ahmed, former deputy chairman of the Earthquake Reconstruction and Rehabilitation Authority (ERRA), shared a formula that he said would be a sure-shot success if followed through. “All infrastructural projects may be handled through relevant lines departments whereas the more people-centred recovery programmes can be undertaken by a dedicated special management unit in the province with full autonomy so that it can bypass laborious bureaucratic processes, procedures, and approvals.

“Both systems need to be interactive and coordinate with each other for the sequencing and prioritisation of their respective project domains to ensure one is not causing harm to the other,” said the retired army officer, who was also a former chairman of the National Disaster Management Authority.