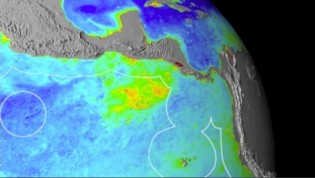 By Diego Arguedas Ortiz
The critically endangered hawksbill sea turtle has few sanctuaries left in the world, and this is one of them. But in 2012 only 53 nests were counted on the beaches of this national park in Costa Rica. And there is an enemy that conservation efforts can’t fight: the beaches themselves are shrinking.
ADVERTISEMENT ADVERTISEMENT