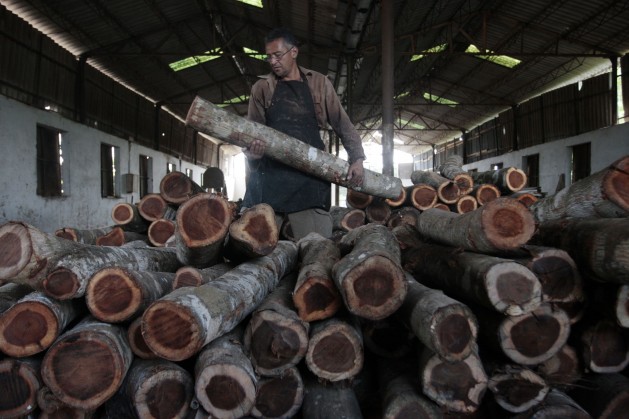 HAVANA, Apr 22 2014 (IPS) - The lack of markets to supply raw materials for Cuba’s new private sector, along with the poverty in isolated rural communities, is fuelling the poaching of endangered species of flora and fauna.

In 2010, the socialist government of Raúl Castro gave the green light to private enterprise in a limited number of activities, mainly in the services sector.

But without wholesale markets to supply the 455,000 “cuentapropistas” – officially registered self-employed people – unforeseen phenomena soon appeared, like the rise in poaching and illegal logging.

Forests, which cover just under 29 percent of the territory of this Caribbean island nation, are suffering the consequences.

“You can get a permit to work as a carpenter, but it’s hard to get the raw materials,” Antonio Gutiérrez, a carpenter who works at a sawmill in the Ciénaga de Zapata, the largest Caribbean island wetland, told Tierramérica. “You can also build more homes, or upgrade homes. People need boards, windows, everything…and to solve the problem they go into the bush and cut.”

Last year, the forest ranger corps levied 19,993 fines for a total of 125,000 dollars, and seized 2,274 metres of wood. Although there are no statistics on wood confiscated in previous years, the authorities say illegal logging is on the rise.

“That’s confiscated mahogany and oak,” said Gutiérrez, 48, pointing to a pile of thin tree trunks on the ground. “Those trees had a lot of growing to do to become real logs.”

He maintained that more wood should be sold to people in order to safeguard forests from illegal logging.

The Agriculture Ministry’s forestry director, Isabel Rusó, told the press in March that the law in effect since 1998 provides for fines that are not effective in dissuading illegal logging. She also said private businesses either have to face a sea of red tape to purchase wood from state-owned companies or buy wood on the black market.

A new forestry bill is to be introduced in parliament in 2015.

But the problems are not only limited to the country’s forests.

In the western province of Pinar del Río, which has rich nature reserves, over two tonnes of poached sea turtles were seized, most of which belonged to endangered or threatened species.

In addition, 219 simple fishing boats were confiscated, and fines were levied for the use of banned fishing techniques, the capture of protected or toxic species, and vandalism against state fishing companies, among other offences.

The capture of the loggerhead sea turtle (Caretta caretta) “is indiscriminate because it is done at night and the females are often on their way to lay their eggs in the sand,”
Pedro Fernández, a 62-year-old bricklayer from Havana who has been a hobby fisherman for four decades, told Tierramérica.

“The turtles are killed and cleaned, and the waste is dumped at sea,” he added. “Because of the way things are done, it’s hard to control and assess the real magnitude of the problem,” said Fernández, who added that he had never fished illegally.

He said that to catch the turtles, the fishermen place net traps at the bottom of the sea for a month or more.

Many of the beaches are protected areas, such as the ones in the Jardines de la Reina archipelago, the San Felipe keys, the Largo del Sur key, the Isle of Youth (Cuba’s second-biggest island), and the Guanahacabibes peninsula in Pinar del Río.

But that doesn’t stop the poachers. Nor do the stiff penalties against poaching or the strict police controls.

The meat of different animals and fish and seafood sell for astronomical prices on the black market. One kilo of loggerhead sea turtle or crocodile meat fetches between five and seven dollars.

The average salary of a state employee – the government still employs roughly 80 percent of the workforce – is the equivalent of 19 dollars a month. But some Cubans have other sources of income, and can afford such forbidden luxuries.

In this business, however, not everyone is always lucky. A young man from Havana returned last month from a trip to Pinar del Río, 160 km west of Havana, with empty hands, after making the journey to buy loggerhead turtle steaks.

Poaching and illegal logging are increasing along Cuba’s coasts and in its forests, mangroves, swamps and marshes – even in the country’s 103 protected areas.

Generally, poachers are men, although women take part in transporting and selling the products.

The authorities are beefing up oversight and inspection, to prevent international smuggling as well, while stepping up environmental education.

“But alternatives must be found to boost the development of populations that live near or inside the nature reserves,” Carlos Rojas, the manager of the Laguna Guanaroca-Gavilanes protected area, told Tierramérica.

In the nature reserve, located 11 km from city of Cienfuegos in southeast Cuba, which depends on both tourism and fishing, poaching has been reduced “due to fear of the law, but not because there’s environmental consciousness,” he said.

“Educational programmes help, but we see that people still feel like they have the right to fish. The bans cause conflicts when it comes to how they make a living,” Rojas added.

One positive step in his administration was to increase the number of people from neighbouring communities on the reserve’s payroll. But Rojas lamented that a project for sustainable fishing had never been implemented. And he said ecotourism would be another path to environmentally-friendly local livelihoods.

Demand is the main driver of poaching of fish and seafood in the reserve’s lagoon, he said. And there are newer, growing phenomena, like collectors, or the lack of markets providing supplies for the private sector, he added.

“Permits were issued for making crafts and selling food, but no one knows where some of the things that are sold came from,” he cautioned.

Two years ago, the non-governmental Cuban Association of Artists and Artisans adopted restrictive measures for those who sold crafts made with coral or shells from vulnerable species.