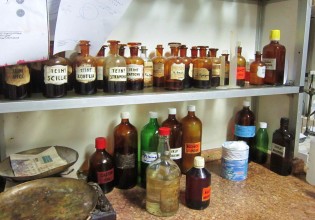 By Dalia Acosta
Margot Parapar gets plenty of laughs from the audience with this joke: "Now the human body is divided into five parts: head, trunk, upper and lower limbs, and condom." Using his female stage name, Cuban drag queen, comedian and health promoter Oliver Alarcón includes HIV/AIDS prevention messages in his shows.

HEALTH: H1N1 Pandemic Is Over, But Vigilance Needed – WHO

By Marwaan Macan-Markar
The World Health Organisation (WHO) is urging countries in Asia to remain vigilant about the spread of the H1N1 influenza virus, which the international body declared was no longer a pandemic a month ago.

By Adam Morrow
As authorities consider suspending a whole academic year to check the spread of swine flu among school children there is a feeling that measures to contain the H1N1 virus - known to be less dangerous than the one responsible for seasonal flu - are going over the top.

By Marwaan Macan-Markar
The race to mass-produce vaccines for the lethal H1N1 virus has attracted contenders from Asia’s developing countries, confirming a noticeable expansion of a field that has been dominated by flu vaccine production centres in Europe and North America.

By Cam McGrath
Muslims marked the start of the fasting month of Ramadan Saturday, but the global H1N1 pandemic has put a damper on religious festivities throughout the Middle East.

By IPS Correspondents
A swine flu advisory issued by the Saudi government, banning the entry of pilgrims under 12 and over 65 years, is a blow for Hajj pilgrims as Muslims the world over prepare for Ramadan which starts this weekend.

By Ranjit Devraj
While the swine flu pandemic has not hit India too hard, it has sorely tested the country’s ailing health delivery system and its plans to remedy the situation through ‘private-public partnerships.’

By Patricia Grogg and Dalia Acosta
The impact of the global financial crisis on the economy in Cuba was a major focus of a speech Sunday by President Raúl Castro, who confirmed that further "adjustments" will be made to this year's budget.

By Marwaan Macan-Markar
Pattadol Piboonsak was gripped with fear last week when he fell ill with a high fever, displaying the usual symptoms of influenza.

By Marcela Valente
These days, people in the Argentine capital are largely avoiding the traditional greeting: a peck on the cheek. Doctor's orders, amidst the fast spread of the H1N1 influenza virus, otherwise known as swine flu.

By Emilio Godoy
Health ministers and representatives of 43 countries and the World Health Organisation (WHO) began to meet Thursday in the Mexican resort city of Cancun to discuss a common strategy to curb the spread of the H1N1 flu virus.

By Marcela Valente
Doctors at the forefront of the battle against the H1N1 influenza virus in Argentina point out that the number of cases is far larger than the official figures reflect. But they also stress that the mortality rate, as a proportion of the much higher number of cases, is lower than people assume.

By Gustavo Capdevila
The cautious tone taken by World Health Organisation (WHO) Director General Margaret Chan when she declared an H1N1 influenza virus pandemic Thursday was only modified when she expressed concern over the potential effects of the virus in developing countries, and among young pregnant women in particular.

By Robert Goodier
On Mar. 28, one month before news of the swine flu outbreak headlined worldwide, a nine- year-old girl in Imperial County, California ran a fever of 104.3 degrees F.

By Gustavo Capdevila
The first step towards a massive global health prevention mechanism, under which billions of people around the world could be vaccinated against the H1N1 influenza virus – while a handful of transnational pharmaceutical corporations raked in the profits – was taken Tuesday parallel to the World Health Assembly.

HEALTH: Voices of Alarm and Moderation at WHO Meet

By Gustavo Capdevila
World Health Organisation (WHO) Director General Margaret Chan issued a warning about the danger posed by the H1N1 flu epidemic, while health ministers from several countries recommended avoiding excesses when it came to remarks about a potential pandemic.

By Fabiana Frayssinet
The H1N1 flu virus has begun its southward march in Latin America, carried by passengers travelling from areas hit by the outbreak. But the mortality rate is much lower than in Mexico, and there are no signs of "sustained domestic transmission" in the rest of the region.

By IPS Correspondents
While the swine flu virus does not appear to be as potentially devastating as first imagined, environmentalists and some public health activists argue that it should be considered a wake-up call to the public about the conditions in which much of our food is being produced.

By IPS Correspondents
China is battling hard to contain the spread of the swine flu after stringent border checks and draconian quarantine measures of Mexican nationals failed to prevent the virus from entering the country.
Next Page »
ADVERTISEMENT ADVERTISEMENT