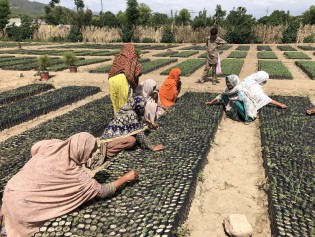 By IPS Correspondents
Despite producing nearly 2.5 million barrels of crude oil a day in a region that contributes about 30 per cent of the world's oil output and controls nearly 40 per cent of proven gas resources, the United Arab Emirates is determined to take giant strides on the path towards sustainable development.

By Dalia Acosta
Carlos Gardel album covers, newspaper clippings and yellowed photographs once covered every inch of the walls in the narrow entryway on Havana's Neptuno Street where someone had turned their home into a tango museum.

ENVIRONMENT-SOUTH AFRICA: Limpopo Steps Out of the Shadows

By Moyiga Nduru
Tourism has long been viewed as one of the holy grails of job creation in South Africa, which is burdened by an unemployment rate of more than 30 percent. Certain parts of the country - Cape Town, and its surrounds for example - have become firm favourites with local and international visitors. Now the lesser known province of Limpopo is also hoping to take its place at the table.

By IPS Correspondents
The government of this Caribbean island is widely perceived to be doing nothing to protect the environment, especially its forests and other green areas.

By IPS Correspondents
Lacandon Indians in Mexico are threatening to use force to stop other indigenous groups from clearing out land and creating settlements in the Montes Azules Biosphere Reserve.

By IPS Correspondents
Native forests have virtually disappeared in eastern Paraguay due to the advance of the agricultural frontier and indiscriminate logging by large landowners and landless peasants.

By Stephen Leahy
Fishing subsidies in the world's rich countries and development that pushes poor farmers off their land are two reasons why the world's oceans have been over-harvested, leading to a drastic drop in fish stocks, say experts.

By IPS Correspondents
At Asia's first Vulture Care Centre in this northern Indian city, scientists are battling to save the scavenging bird, which faces extinction due to a mysterious viral infection that is upsetting the ecological balance and is a serious public health menace.

By Emad Mekay
The recent appointment of fast food giant McDonald's to the advisory board of an environmental group has drawn accusations of ''green washing'' from environmentalists and led one board member to resign in protest. But both the company and the group strongly deny the accusations.

ENVIRONMENT-LATAM: No Forest for the Trees

By IPS Correspondents
A tree plantation is not a forest, says forestry engineer Rodrigo Herrera, of Greenpeace-Chile, one of many environmentalists in Latin America fighting to preserve native forests as integral ecosystems - with many frustrations and relatively few advances to show for their efforts.

By IPS Correspondents
Illegal logging activity in Ecuador's Amazon region appears to form the backdrop to conflict between indigenous groups that recently claimed the lives of around 30 Tagaeri Indians at the hands of the Huaorani in the remote eastern jungle province of Pastaza.

ENVIRONMENT-LATIN AMERICA: A Dangerous Splash in the Sea

By IPS Correspondents
From Acapulco to Viña del Mar, the most beautiful beaches of Latin America are turning into dangerous places for bathers, the result of increasing contamination from various sources, but mostly from sewage discharged into the sea.

By IPS Correspondents
The European Union will assess the development of its green policies since the last year's Earth Summit next week as it welcomes environmental actors to Brussels.

By IPS Correspondents
As genetically modified corn began to be harvested for the first time this month, the focus of the Philippines' debate on biotechnology crops is shifting to fears that the commercial planting of this corn variety may lead to the contamination of other agricultural produce.

By IPS Correspondents
Frustrated by years of fruitless campaigns, researchers are now turning to the last line of defence: schools - to protect Senegal's endangered medicinal plants.

NEPAL: On 50th Year of Conquest of Everest, Villagers Look Back

By IPS Correspondents
In the heart of Namche Bazaar, the village that is the unofficial capital of the Everest region, yet another lodge is being built.
Next Page »
ADVERTISEMENT ADVERTISEMENT