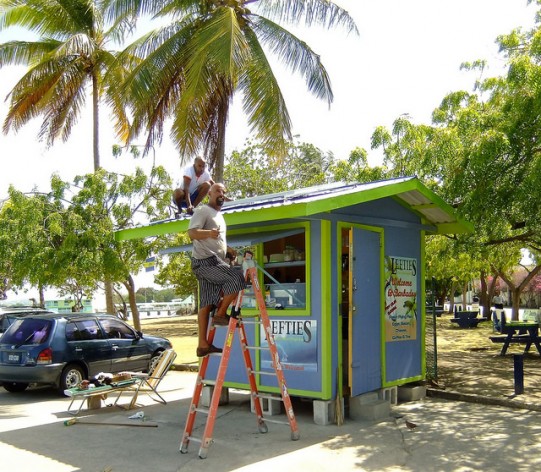 BRIDGETOWN, Jun 6 2014 (IPS) - Facing potential extinction under rising sea levels, many small island nations are embracing renewable energy and trying to green their economies. Although the least responsible for carbon emissions, small countries like Barbados are on the front lines of climate impacts.

“Small island nations’ voices have to be heard by the rest of the world,” said Achim Steiner, executive director of the United Nations Environment Programme (UNEP).

“Many will undergo fundamental changes. Some will lose 60 to 70 percent of their beaches and much of their tourism infrastructure. Climate change will destroy some countries and the livelihoods of millions of people,” Steiner told IPS in Bridgetown.

Up to 100 percent of coral reefs in some areas of the Caribbean sea have been affected by bleaching due to too-hot seawater linked to global warming. Without global action to reduce emissions there may not be any healthy reefs left in the entire Caribbean region by 2050, according to UNEP’s Small Island Developing States Foresight Report.

Released in Bridgetown on World Environment Day Jun. 5, the report calculates that island nations in the Caribbean face187 billion dollars in shoreline damage from sea level rise well before the end of this century.

A 50-cm sea level rise will mean the country of Grenada will lose 60 percent of its beaches. Sea levels are destined to rise far higher than that, say recent science reports about the unstoppable melt of the massive ice sheets of Antarctica and Greenland along with hundreds of glaciers.

Islands are especially vulnerable to the impacts of global warming which will adversely affect multiple sectors including tourism, agriculture, fisheries, energy, freshwater, health and infrastructure, the report concludes.

“When our planet speaks we must listen,” said Barbados Prime Minister Freundel Stuart.

“Nature knows how to hit back,” Stuart told IPS.

For Barbados, World Environment Day with its theme “Raise Your Voice Not the Sea Level” was not just a ceremonial action but part of a commitment to become “the most advanced green economy in the Latin American and Caribbean region,” he said.

This country of 275,000 people is in the eastern Caribbean, 800 km from the shores of Venezuela. Facing recurring droughts in the past two decades, Barbados has been forced to use energy-intensive desalination to provide enough drinking water.

Imported fossil fuel means energy costs are many times higher than in rich countries like the U.S. Barbados has set a goal of 30 percent renewable energy by 2029 but expects to achieve this by 2019, said William Hines, Barbados’ Chief Energy Conservation Officer.

Solar energy is 30 to 40 percent cheaper but requires significant upfront investment since nearly everything must be imported. However, the payback period in a sun-rich country like Barbados is five to seven years, Hines said.

Aside from finding the money to build large-scale solar, integrating into the nation’s electrical grid has also been challenging. But because this is a small nation, the scope and scale of such challenges are smaller, and they can be resolved relatively quickly.

The three-coral atoll nation of Tokelau in the South Pacific became the first country in the world to become 100 percent powered by renewable energy in October 2012. Other South Pacific nations, including the Cook Islands and Kiribati, plan to be 100 percent renewable by 2020.

As a group, the 52 Small Island Developing States (SIDS) have committed to cut their fossil fuel dependence by 50 percent by 2035. This is as much about setting an example for the world as it is a solution to the crippling fossil fuel costs that devour half of some countries’ budgets.

Barbados is going beyond renewable energy and has put policies into place intended to ‘green’ its entire economy. It has already completed a three-year study called the Green Economy Scoping Study to determine what needs to be done. That research concluded that green policies are not enough, and that Barbados also needs more public and private investment, along with education and changes in consumer behaviour.

“Barbados is one of the world leaders in greening their economies,” Steiner told IPS in an interview.

Small islands need support including financing and technology transfer from the developed world to be able to make this transition and to cope with current and future climate impacts. They can and want to move quickly to diversify their economies, create green jobs, increase resource efficiency and shift to green energy, he said.

“Small islands can serve as beacons for the rest of the world,” Steiner stressed.